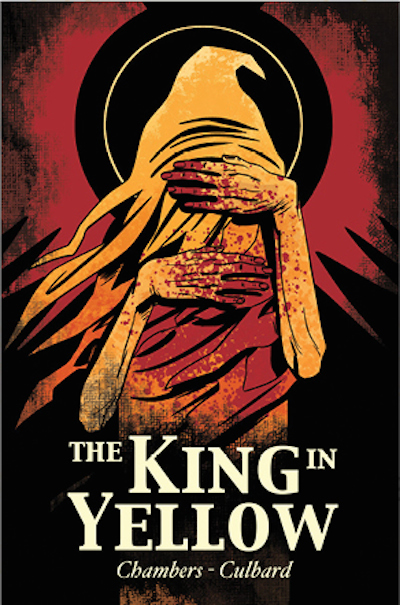 THE KING IN YELLOW by Chambers-Culbard

“‘The King in Yellow’, a series of vaguely connected short stories having as a background a monstrous and suppressed book whose perusal brings fright, madness, and spectral tragedy, really achieves notable heights of cosmic fear.” – HP Lovecraft

Adapted from the disturbing collection of short stories by fin-de-siecle horror writer Robert W. Chambers, I.N.J. Culbard weaves these supernatural tales about a global epidemic of madness into a terrifying graphic novel. Named after a fictional play that is referenced through much of the work, the book introduces us to a world of macabre characters and malevolent spirits, as well as presenting the curse of a play that first seduces the reader and then drives them insane.

Chambers was influenced by many of the Decadent writers, indluding Poe, Baudelaire and Wilde. His own influence extends from contemporaries like Raymond Chandler to current masters of the form, including Neil Gaiman and George R.R. Martin, ‘The King in Yellow’ is a central literary reference in the first season of HBO’s True Detective TV Series, which helped push the book up to Number 1 on Amazon UK’s horror charts in 2014. Its influence has spread to games and music, with references in the lyrics of Blue Oyster Cult and King Crimson. One of the stories from the books, “The Yellow Sign”, received a film adaptation in 2001.

Culbard seemlessly weaves Chamber’s Paris-set tales into a mesmeric standalone read. He has won international praise for his deft adaptations of H.P Lovecraft and Conan Doyle, as well as his original sic-fi tale, ‘Celeste’, which was shortlisted for the British Comic Award in 2014.

‘The King in Yellow’ is published by SelfMadeHero and launches on 28 May at Gosh! Comics in Soho.