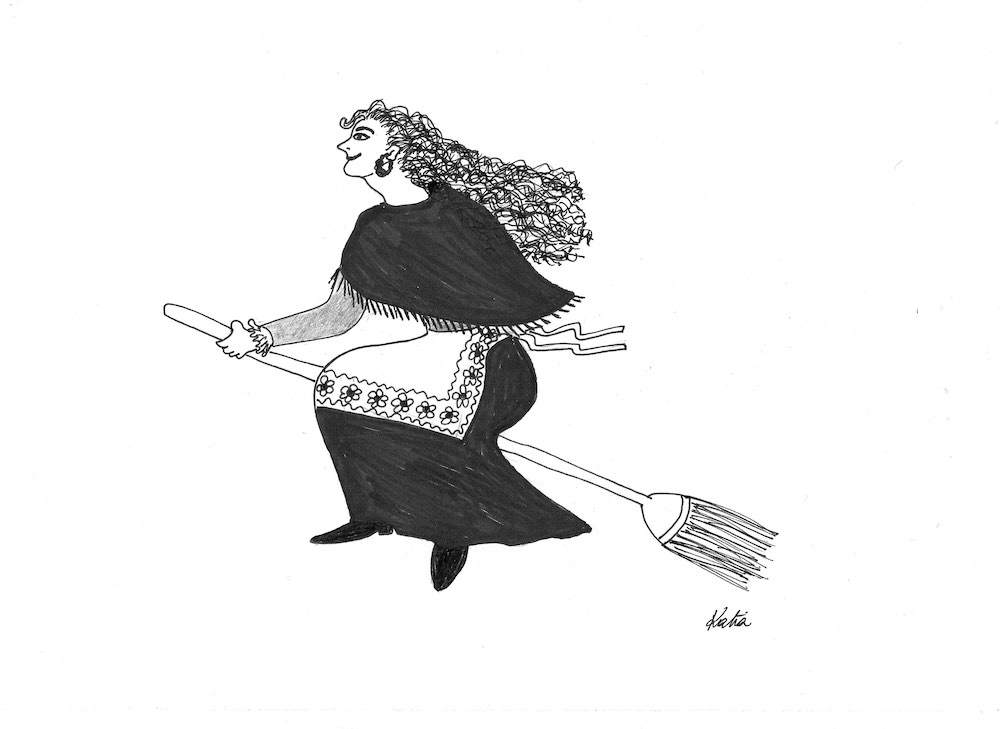 THE ITALIANIST. THE DWARVES’ MARKET and WITCHES’ POLENTA as told by Mary Tibaldi Chiesa, translated by Katherine Gregor

They say that there’s a secluded place in Sicily where, on Christmas Eve, an enchanted fair takes place and that it lasts from the stroke of midnight to the first reading of the Gospel. The problem is finding out where this wonderful market takes place, which is a shame, since they say you can buy things at very competitive prices there.

One Christmas Eve, it so happened that three travellers were walking across the open countryside. They weren’t very familiar with the area and suddenly realised that they’d lost their way. They looked here and there and heard mooing, bleating, neighing, quack-quack and cock-a-doodle-do.

They turned in the direction of the sound and soon found themselves in a clearing, where a very lively fair was going on.

All kinds of cattle and foods, fruit and exquisite sweetmeats were on sale. The merchants were tiny little men, with strange old men’s heads on small children’s bodies. The dwarves were charging very little for their merchandise, and the three travellers got wonderful bargains with the little money they had in their pockets.

“Thank goodness!” they said. “We had a good Christmas Eve. It was so sad being alone and lost in the dark.”

All of a sudden, however (as it happens it was the time for the first reading of the Gospel) the sound of distant bells carried through the air. And, in the blinking of an eye, before the dumbstruck faces of the three travellers, the fair, the cattle, the dwarves, the food, everything vanished in a puff of smoke.

They looked at the items they had bought. One of them had a suckling lamb in his arms, another a cornet heaped with dried figs, and the third a packet full of walnuts and hazelnuts… It was a miracle… The lamb, the figs and the nuts had turned into solid gold. So the three travellers started dancing and bouncing with joy.

Ah, wouldn’t it be nice to discover where this fair takes place?

As told by Mary Tibaldi Chiesa

What a terrible winter it was! The inhabitants of Valtellina couldn’t remember one like it. It was bitterly cold and heavy snow covered everything: fields, bushes, plants, reaching up to the first floors of the houses.

In the villages, people went out through their windows instead of using the door. Not that there was anything worth being outdoors for! An icy wind was blowing that would often turn into a furious blizzard. The sleet blinded you, the icicles pricked you like thin darts, and it was as dark by day as it was by night. The howling of the wind mixed with the rumble of thunder and the roar of the freezing rain.

The draughts infiltrated the cracks and gaps in the houses, and made the timid flames of candles and lamps quiver.

It really was hellish weather.

On top of that, it was rumoured that witches, who have a whale of a time during hurricanes, gathered every evening and let rip in a frenzied circle dance. Villagers would point at a few old women, ugly as sin, and others who were young and beautiful, who were believed to be witches.

“You see those women over there,” one particular peasant from Cepina, who was as old as Methuselah and who knew a great deal, would say, “every night, when everyone’s asleep, they go into their kitchens, take out a little bottle and a special brush, coat the handle of their broomstick, sit astride it and away they fly, galloping through the air. Then they assemble in the middle of the forest, on top of the mountain, and there they make polenta in a cauldron this big, and they dance all night, in the snow, shrieking and singing.”

I’m almost tempted to go to the witches myself, another peasant thought. He had nine children and was as poor as Job. Soon, there’ll be no more corn flour left in the box and we won’t be able to make any more polenta. And then what are my children and my wife going to eat? Oh, dear me…

A few days went by and the bad weather didn’t abate. Cold and rain, snow and wind, thunder and lightning. Pandemonium! The flour ran out and one night, the poor peasant’s children went to bed hungry, stomachs empty, as did their father and mother. At midnight, they were roused by a terrible crash, a rumble, a frightening howl.

“Avalanche!” the father cried, leaping out of bed.

But it was too late to run. Down the steep crags of the mountain, at breakneck speed, uprooting trees and dislodging rocks, the terrible mass of white snow was rushing down and they didn’t stand a chance.

“God help us!” the man groaned, falling to his knees.

The avalanche rolled past the little house, so close that the blast threw open the window and a powerful gust of snow blew into the room. At the same time, something large and solid landed on the floor with a thud.

Groping in the dark, the peasant went to close the windows and shutters, while the younger children and his wife were moaning from fear. Then he lit a candle and… what do you think he saw?

On the floor, in the middle of the room, lay the most wonderful, enormous, yellow polenta.

This must be the witches’ polenta, he immediately thought, remembering the decrepit old man’s story. However, he was hungry and, gingerly, he approached and tried it. It was delicious!

Except that, understandably, it was frozen. It had come down from the top of the mountain with the avalanche.

They heated it and it was so large that they had enough food for two whole days. Meanwhile, the weather improved, and people began clearing the main road. The peasant found work as a snow shoveller and the danger of starvation for his family was averted.

So, as you see, sometimes even witches have their uses!

As told by Mary Tibaldi Chiesa

Mary Tibaldi Chiesa (1896 – 1968) was an Italian writer, translator and politician. She was the author of numerous books about music, including biographies of composers, translations and books for children. She was a member of International Order of Freemasonry Le Droit Humain.