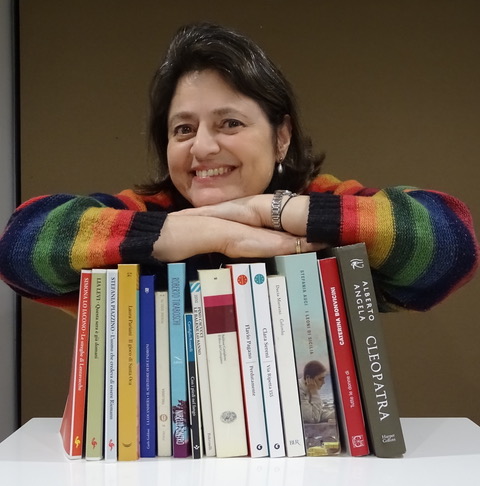 THE ITALIANIST: Riveting Italian Books You Need to Know About. Introduced by Katherine Gregor

Katherine Gregor is our new resident Italianist. Born in Rome, she is an appassionata and translator of Italian literature. In this new monthly column she will introduce you to some riveting Italian books – not yet translated into English – that you really need to know about!

I was first transported – or rather hurled – into Italian literature thanks to the team effort of Italian law and French bureaucracy. Then lured back into it by a wolf. I guess that was to be expected, since I was born in Rome, the city of the she-wolf.

When I turned eighteen, I claimed the Italian citizenship I was entitled to by virtue of being born on Italian soil. One spring morning, I found myself in one of the grey, paper-cluttered offices of the Comune in Via Petroselli, standing before a City Hall official who was representing the Mayor, a band with the tricolore secured around his waist with paper clips.

A few days later, my school, the French lycée in Rome, announced that my new nationality now obliged me to sit the maturità exam (A-Level equivalent) in Italian literature with my Italian peers. Except that they would have had four years to prepare for it – and I, four terms. So I spent the summer reading Ugo Foscolo’s Last Letters of Jacopo Ortis, Giovanni Verga’s The House by the Medlar-Tree, Carlo Levi’s Christ Stopped at Eboli, Leonardo Sciascia’s The Day of the Owl, and a few others I can’t remember now.  Oh, yes, and Dante’s Paradiso and Purgatorio. Just over a year later, I acquitted myself in the maturità exam respectably. The fact that it was an oral exam helped. A flesh-and-blood examiner is never as terrifying as a cold, blank sheet of paper.

Having survived this full-immersion trauma, I developed a mild form of post-stress antagonism towards Italian literature, which, untreated, turned into a chronic condition, so – with the exclusion of plays (I translated some works by Luigi Pirandello and Carlo Goldoni) – I read very little Italian literature for about three decades.

In the spring of 2011, I was standing outside an enclosure in an animal rescue centre in Abruzzo, in loving communion with a young she-wolf with a gammy leg. I was bewitched by her eyes, so full of magnetism and arcane knowledge.

“What’s her name?” I asked one of the keepers.

“What a beautiful name.”

“We often call the animals after the people who rescued them, and Dacia Maraini found this cub in her garden.”

Later, in the window of the village bookshop, I saw several books by Dacia Maraini. My desire to own one of her books was, I confess, motivated more by my yearning for closeness with the she-wolf with the bewitching eyes than a desire to make up for the fact that I had never heard of – let alone read – one of the grande dames of contemporary Italian literature.  I bought her then most recent novel, Colomba. There’s no original way of phrasing it. I couldn’t put it down. Dacia Maraini’s prose had for me some of the lure and mystery I had experienced in the presence of Dacia the she-wolf. Her style is both direct and suggestive, earthy and magical. I found myself reading the odd sentence aloud, discovering how the words sounded to my ears, how they tasted in my mouth, what colours they were in my mind.

Dacia Maraini led me to other contemporary and less contemporary Italian writers. I began taking an interest in new publications, in literary prizes, and in Italian culture in general. I was suddenly rediscovering the land where I had been born, as though I had never really seen it.

Having been partly brought up and schooled in France, as well as having read French Single Honours at Durham (Italian was a subsidiary subject), French was my stronger language back then, so when I finally made up my mind to try my hand at translating professionally, as opposed to just doing the occasional favour, I naturally assumed I would be translating literature from French. L’homme propose et Dieu dispose, or rather l’uomo (or, in this case, la donna) propone e Dio dispone. My first published translation was from Italian.

Although I so far have six credits from French – and love working with this language – my translation CV is dominated by Italian: I have translated or co-translated fourteen books, as well as plays, samples and other bits and pieces. At home, I drive my husband crazy by starting sentences in English which I then finish in Italian – or the other way around.

One could say that Italian sat patiently in the background, waiting for me to get over my adolescent, then young adult tantrum, until I was ready to rush back into its forgiving arms, so it could help me build a career.

One could also say that Italian acted as my matchmaker. I met my husband – French, Spanish and Italian translator Howard Curtis – when I attended his masterclass in Italian literary translation.

I wonder what Italian has in store for me next.