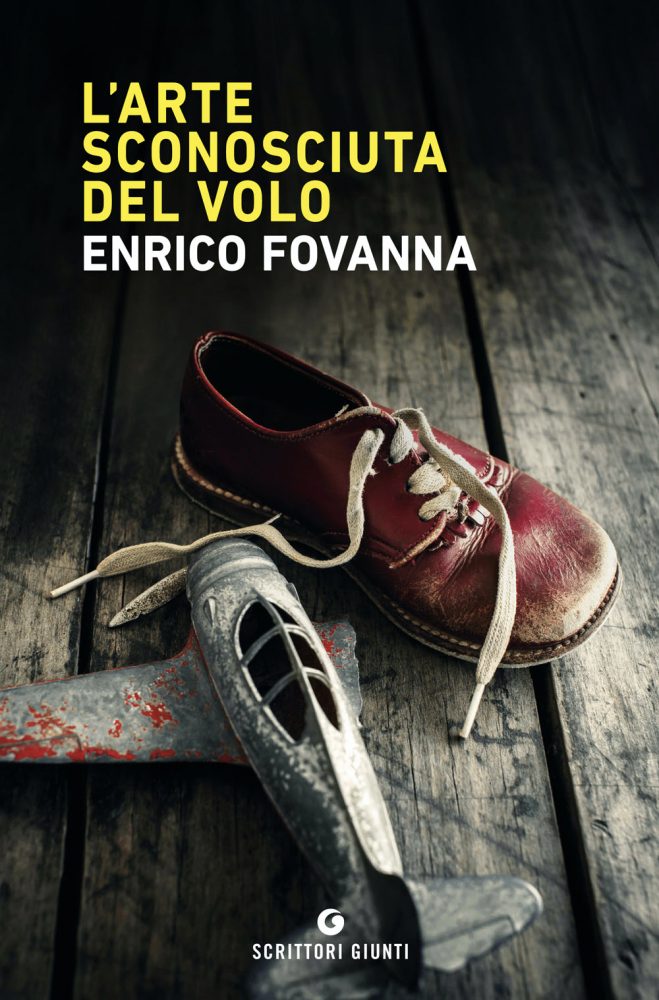 Piedmont, 1969. The lifeless bodies of two missing children are unearthed after an anonymous letter is received by the local carabinieri.  That’s when eight-year-old Tobia begins to fly in his dreams, defying gravity, euphorically weightless. It is not long before suspicion for the murders falls on a man Tobia and the other children in the village love and admire. The evidence, although insufficient, points to him. Except that Tobia knows something that could be useful to the investigators, only he’s not sure if he should tell – what if everybody makes fun of him?

Forty years later, in Milan, a disillusioned, lonely Tobia wants to quit his job as a pathologist. A phone call from a childhood friend inviting him to the funeral of a cherished old playmate, the village oddball, finally forces Tobia to take the long-overdue journey into the past to discover the true murderer,  put things right, and regain that sense of weightlessness.

Written with acute sensitivity and honesty, L’arte sconosciuta del volo is a page-turner you can’t put down and at the same time read more slowly because you want it to last for as long as possible. So you linger on every word because every word is there for a purpose. Enrico Fovanna’s narrator is ageless and finely-tuned, equally natural as a child and as an adult. More than a noir novel, L’arte sconosciuta del volo is quietly introspective and compassionate. What makes it exceptional is its courage to glow with a gentle light in the face of darkness.

KG:  The title of your novel refers to the fact that Tobia, the first-person narrator, starts flying in his dreams as a child. Why is this experience so important to the plot?

EF:  It’s a recurring dream in which Tobia thinks he can control the force of gravity by pedalling through the air, just like Santa’s reindeer in cartoons. Controlling gravity means experiencing the power of weightlessness. But in real life – as opposed to dreams – it’s a slow and difficult conquest. That’s why Tobia learns that you need something else if you want to overcome life’s hardships. You have to go back with your memory and find out what it is that stops you from being weightless.

KG:  As an adult, Tobia becomes a pathologist.  How is this significant? How is this connected to his childhood experiences?

EF:  Strangely, Tobia has been obsessed with death since childhood, so it’s no wonder he decides to become a pathologist who dissects dead bodies. Another peculiarity of his is to attend the funerals of strangers. Thanks to a new relationship, at some point he discovers that feelings are like people, that they can only be analysed in detail once they’re dead. It’s a journey towards a new time, when being set free from childhood ghosts opens for him the gates to an enthusiasm he had left in the basement, in the dark, for a long time.

KG:  Childhood – and children – are the protagonists of your novel.  Even the quotation at the beginning of the book is from a letter to Kafka, where his friend Max Brod writes “Even when you’re old, you’ll be a child with white hair”. Would it be fair to say that childhood is something nobody can truly leave behind?

EF: Yes, that’s right, but we mustn’t go so far as to say that childhood marks us for ever and irreversibly. Childhood is simply the season when the foundations are laid for all that is to come, something the monk understands perfectly well when he decides to keep something secret from a child. But it’s also true to say that every adult with self-awareness can work on his or her own brittleness and turn it into an opportunity for strength. It’s not easy, of course. Because all the important paths run through fear.

With thanks to LeeAnn Bortolussi of Giunti Editore, Milan.