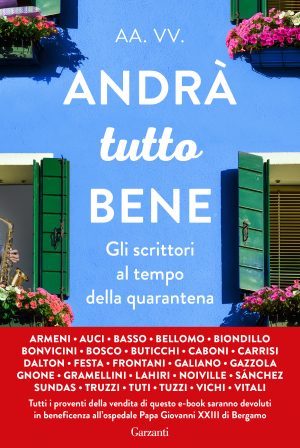 Andrà tutto bene (All Shall Be Well)

Writers at the Time of the Quarantine by

Until its figures were overtaken by the UK, Italy had the highest number of deaths from Covid-19. As we know, Lombardy was the worst hit, and the city of Bergamo in particular suffered thousands of losses. Few of us are likely to forget the harrowing images of the convoy of military lorries transporting bodies to the crematoria of neighbouring cities because Bergamo was overwhelmed. In the early days of these dark shadows over Italy, the residents held on to an affirmation that became a hashtag: Andrà tutto bene. All shall be well. And it is the title of this e-book, the brainchild of publisher Stefano Mauri, from Garzanti e Gruppo editoriale Mauri Spagnol (A.K.A. GeMS): twenty-six perspectives on the pandemic by as many writers, mainly Italian, but also French, Spanish and American. An eclectic collection of stories, experiences, letters and musings that is a perfect reflection of the colourful variety found in the current Italian literary landscape. Andrà tutto bene conveys anguish, doubt, solidarity, humour, quirkiness and, above all, human warmth and love.

One of the contributors to this venture is Sicilian author Stefania Auci. She is a teacher and the author of popular women’s fiction as well as historical novels, including Fiore di Scozia (2011), La Rosa Bianca (2012) and Florence (2015). Her latest novel, The Florios of Sicily, has been a resounding success and was the highest-selling book in Italy in 2019. It has recently been published in English by HarperVia (in Katherine Gregor’s translation). Stefania Auci is currently writing a sequel to The Florios of Sicily.

KG:  The Florios of Sicily has already been translated into English, French, Spanish and Dutch (rights sold to 27 countries). How do you see the role of the translator?

SA: It’s a fundamental role. The translator not only has to capture the voice of the author but also to be a kind of cultural mediator. They need to be not just linguistically competent but also to have an awareness of and sensitivity to the culture of the language from which they are translating.

KG: Where and when do you write?

SA: I write at home, at my desk, very early in the morning because it’s quiet and I can focus better. Ideally, someday I’d like to have an office away from home, so that I can concentrate fully without distractions.

KG: How do you imagine this coronavirus crisis will affect us and literature in the future?

SA: Speaking for myself, this period has been useful for taking stock. This crisis will probably bring more fear into our relationships with others but also more awareness of other people, of body language, of physical closeness and of skin contact. And this is bound to affect what and how we write. I fear we might be flooded with autofiction – not all of it good quality – and not just in literature but also film and art in general, as well as a loss of a sense of direction, for a while. There may also be a period of assessment of how this crisis was handled both individually and collectively, and, consequently, we will need to decide how we tell this story.

ANDRÀ TUTTO BENE (All Shall Be Well)