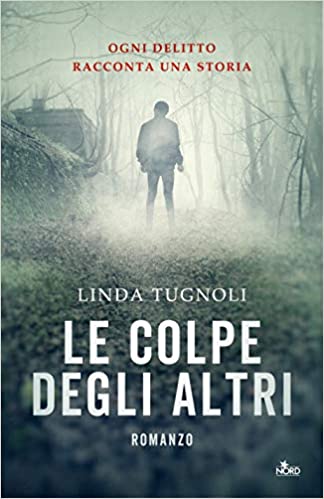 Set in a remote Piedmont valley, Linda Tugnoli’s Le colpe degli altri has an unusual protagonist. Guido, now a solitary gardener, has returned to his native region after experiencing a severe trauma in Paris, where he was a highly paid ‘nose’ for a prestigious perfume house. But he doesn’t just have an acute sense of smell; Guido’s other senses are also highly tuned and, fuelled by a rich imagination, his mind works overtime, sometimes at vertiginous speed, meaning his view of the world is conditioned by his above-average perceptiveness.

It’s this perceptiveness – as well as his knowledge as a gardener – that makes him the only person to notice an apparently insignificant detail next to the body of a murdered young woman: a gingko biloba leaf that has no place there. In spite of himself, Guido becomes embroiled in the investigation, much to the annoyance of the police inspector, a Sicilian a long way away from the blazing sun, plentiful food and ancient civilisation of his native island, who struggles with the cold, foggy climate and, by his own admission, cannot ‘read’ the taciturn locals.

About that, Guido didn’t have a moment’s hesitation: the young woman was quite dead. There was a pool of blood spreading under her head. Her dark-blue eyes were open wide, staring at the sky of the same colour between the pillars.

He took a step back and looked around. A sudden gust of wind froze the sweat on him.

Why had a young woman dressed like that come to this abandoned garden? The villa was uninhabited, he’d been told that the owners lived in Kenya. They were property developers or engineers and, like many descendants of the picapère – stonecutters from these valleys – only came here three weeks a year, in August, to enjoy the coolness of the Alpine foothills before going back to building roads under the African sun.

He looked in the direction of the house; now the gust of wind had passed nothing was stirring, not even the leaves on the trees. Suddenly, the silence felt unnatural to him. He focussed again on the young woman wearing that evening dress, lying on the ground. Parties with long evening gowns hadn’t been seen for at least half a century around these parts. The tennis club further down the valley had closed decades ago, and its Art Nouveau porticos, mirrored in the water, were crumbling with understated elegance, the fields overlooking the stream now overrun by weeds. By an association of ideas, his mind created the image of thousands of tennis balls carried away by the current and fished out by somebody downstream, someone who had perhaps started a collection. He dismissed that absurd idea; this was no time to get lost, as usual, in harebrained reveries – he had to call someone, notify the police.

Finding an inhabited house in the area was impossible, let alone a phone box, the villa was completely isolated.

The only thing he could do was go back down towards the town and stop off at the first café on the road. He looked back one more time before setting off, and a white hand against a black background suddenly flashed before him, holding a rose. But not a freshly picked rose. The ghost of a rose that had been left to dry for years between the pages of a book.

‘Is everything the way you left it an hour ago?’

The inspector, more or less the same age as him, had asked to be taken to the gazebo. He had a strong southern accent, but there was another police officer, younger and shy, who was from Guido’s part of the world.

With an abrupt gesture, he stopped him at the edge of the open area surrounded by pillars, so they wouldn’t tread on the large number of footprints with mud and leaves. He hadn’t noticed them earlier, but now a special torch standing on the ground cast a harsh beam of blueish light over everything.

‘Earlier on, did you come in or stay outside?’

Sicilian. The accent sounded Sicilian. How come he’d ended up fifteen hundred kilometres away from home? ‘No, I didn’t come in.’

LE COLPE DEGLI ALTRI (‘The Faults of Others’)

Linda Tugnoli lives between Rome – where she works as an author and documentary-maker – and the Sabine countryside, where she lives in a farmhouse with her husband, three children, a vegetable garden, a greenhouse and an assortment of large dogs.