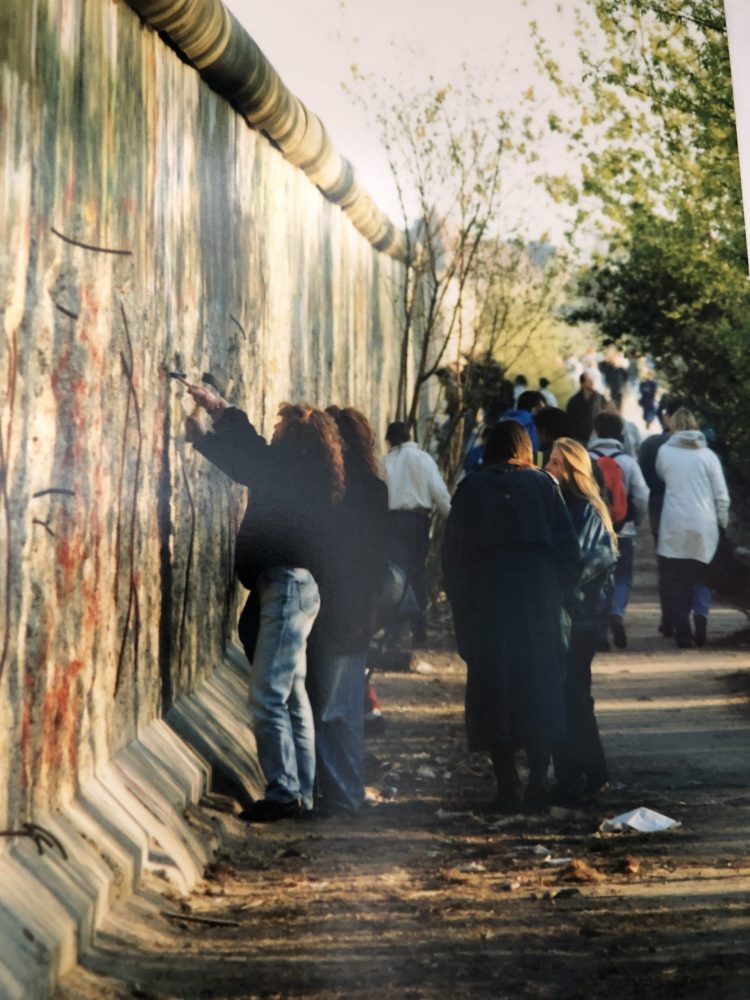 The German Riveter: MY TWO GERMANYS: A TEENAGER’S EXPERIENCE By Heike Krüsemann

‘It must have been fun growing up in eighties’ Germany, Mum, all that great music?’ My daughter looks at me expectantly. She’s twenty-four years old, the same age I was when the Berlin Wall came down in 1989. Fun? Hm. Yes, the music was cool – but growing up in West Germany in the seventies and early eighties, centre-stage as nuclear Armageddon threatened, didn’t really seem fun at the time.

When I was sixteen, my class went on a school trip to East Germany, at the invitation of the FDJ, the Freie Deutsche Jugend, the official GDR youth organisation.My classmates and I treated the whole thing like a bit of a jolly. ‘You have to look more impressed!’ an exasperated tour guide exclaimed at my friend in Karl-Marx-Stadt (now Chemnitz), without a hint of humour. We were just so used to our Meinungsfreiheit (‘freedom of opinion’) that it didn’t occur to us to fake an opinion, not even to be polite.

While we may not have looked impressed, we did notice things around us: the loudspeakers mounted in the squares, blasting out productivity statistics to no one in particular; the huge banners in German and Russian, proclaiming never-ending friendship with the Brüder und Schwestern (‘brothers and sisters’) in the Soviet Union. There were unfamiliar words, too: anti-faschistischer Schutzwall (‘anti-fascist protection rampart’, aka the wall), Anglo-Amerikanische Bomber-Verbände (‘Anglo-American bomber associations’, aka the Allies).

Behind the scenes it was a different story. My friend Annette and I made friends with two girls our age: Christina and Iris from Erfurt in the GDR. We went back to visit them in our school holidays. We had to exchange a daily minimum of Deutschmarks for East German money, and returned from every visit with suitcases full of books by Russian authors in translation. Through our friendship we learned more about people’s everyday lives in the GDR, the good and the bad. Once, the four of us went to a disco – under constant observation, not just by the ever-present Erich Honecker portrait on the wall, but also by stern-looking middle-aged chaperones. I took some selfies – or as we called them then, ‘photos’. Suddenly the lights went on, the music stopped, the doors slammed shut. ‘BRD-Bürger!’ (‘West Germans’) snarled one of the scary overseers, as if that explained everything, snatching my camera and pulling out the roll of film in one swift movement. We were gobsmacked but didn’t dare protest too much – we would be out of the country soon, but our friends might still be in trouble.

A few years later, the first East Germans filed across the border in Berlin without anything bad happening. A wave of relief and celebration reverberated around the two Germanys and beyond, at the bloodless end to the GDR. Thirty years on, it’s fair to say the process of reunification has not been easy; some may even say it has failed. But with the disenchantment and the ugly growth of populism in eastern Germany, we’d do well to remember the joy of 1989, and the promise it held for our futures.

Heike Krüsemann is a German UK-based researcher, writer and translator with an interest in language, culture and education. She taught languages in the UK for twenty years, and is now researching the ways in which German is viewed and represented in schools and the media.