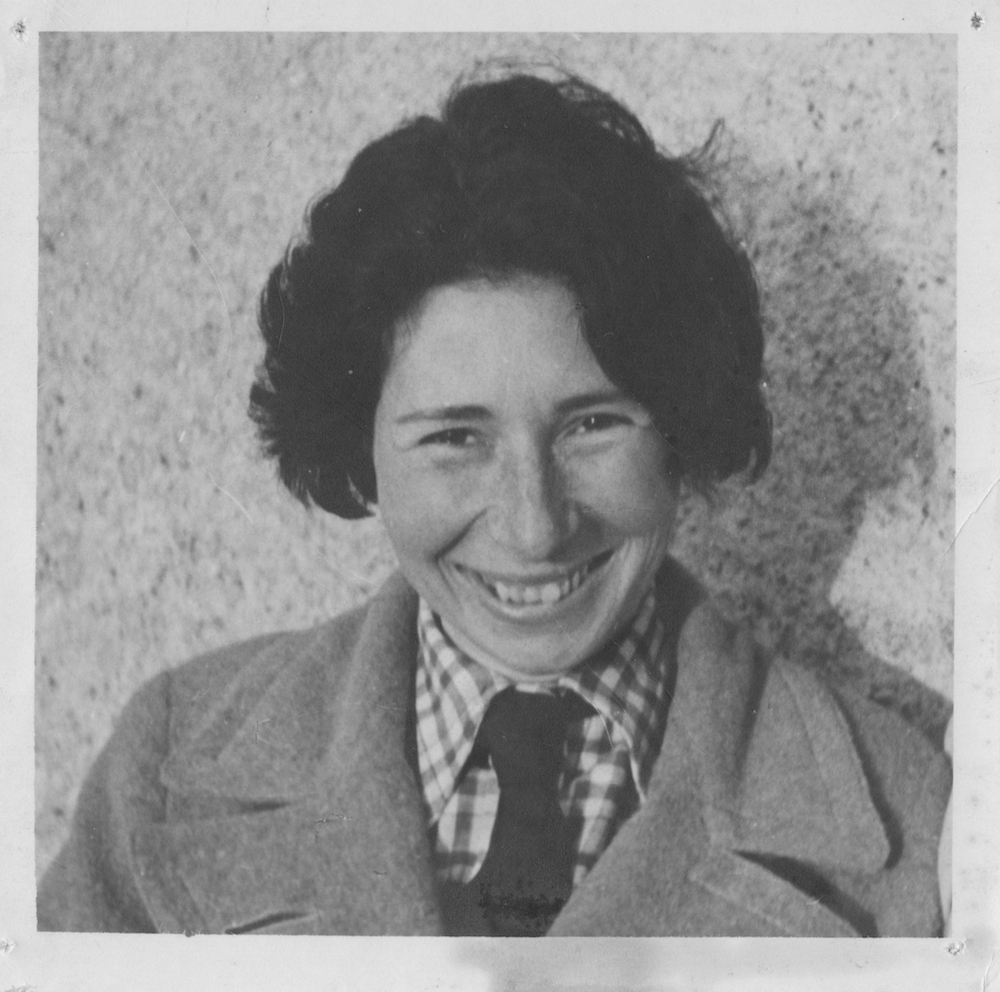 The German Riveter: MY MOTHER SONYA by Maik Hamburger

My mother Sonya always vehemently objected to being called a spy. ‘I was a Kundschafter for the Russian Red Army,’ she said. Kundschafter (intelligence operator) was the accepted term for socialist operators, whereas spy was a pejorative term for capitalist agents, smacking of cloak-and-dagger work and femmes fatales like Mata Hari. My mother’s vivacious personality did indeed attract a number of above-average men but she would have abhorred employing this as a decoy and was certainly not a femme fatale. To all intents and purposes she was a dutiful middle-class German housewife caring for her family and indeed one of the bravest and most successful female spies who ever lived.

Born Ursula Kuczynski in Berlin in 1907 to a family of intellectuals, she joined the Communist Party early in life, married my father, the renowned architect Rudolf Hamburger, and accompanied him to Shanghai, where I was born in 1931. In China she was recruited by top agent Richard Sorge, a German journalist and Soviet military intelligence officer, to work for the Soviet Army Intelligence, the GRU. It was Sorge who gave her the undercover name of Sonya. My mother’s main activity was to operate a clandestine radio station transmitting information to Moscow. She did this to such good effect that she rose to the rank of colonel and was awarded the Order of the Red Banner – without ever donning uniform.

Sonya was active in Poland, where my sister Nina was born, and posted to Switzerland, where she worked for the legendary Red Chapel network. She divorced my father Rudolf and married the English communist and Soviet agent Len Beurton. In 1940 she and Len moved us all to England. I was nine years old and had already lived in four countries. Living in Great Rollright, a little village in the Cotswolds, Sonya achieved the apex of her career: she recruited the German-born physicist Klaus Fuchs, who lived in Birmingham and was employed in top-secret research work on the atomic bomb. Fuchs provided her with large quantities of classified information about the development of the bomb, which she duly passed on to her central office in Moscow. Whenever the material was too bulky or contained too many formulae for sending in Morse code, she deposited it in a secret letter-box in Great Rollright for a Russian agent to pick up. It’s estimated that this clandestine help from the West speeded up Soviet atomic research by about two years.

When Klaus Fuchs was arrested in 1950, Sonya managed to escape exposure and flee to the new German Democratic Republic – East Germany – taking Len and my sister Nina and my younger brother Peter with her. I had started my studies at Aberdeen University but in 1951 I felt drawn to the GDR and stayed.

In the GDR my mother opted out of her work as a secret agent and embarked on the career she had always dreamt about: she became a writer and published widely. She adopted another new name, Ruth Werner. Released from her pledge of secrecy to the GRU about her espionage activities, she was now free to publish her story. Her autobiography Sonjas Rapport became a major bestseller in the GDR, was translated into Russian and Chinese, and in 1991 into English as Sonya’s Report. It was translated by her sister Renate Simpson, who lived in England, and represented the first uncensored text about Klaus Fuchs and their clandestine work, which had been deleted in the German version at the behest of the Russians.

My mother was keen to attend the launch of Sonya’s Report in London but wasn’t certain whether she could risk setting foot on English soil again. After all, she had been an accomplice to passing on high-security secrets to a foreign power and could be arrested as a criminal. Then, an extraordinary thing happened: Tory MP Graham Riddick put a question to the House of Commons. He asked whether Her Majesty’s Government intended to allow ‘this traitress Ruth Werner’ to come to Britain for her book launch and prosper on her ill-gotten royalties. The Attorney General replied that fifty years had elapsed since these offences; Frau Werner was an old woman and no action would be taken against her.

So, my mother bought an air ticket to London. But then something happened which gave her a much greater fright than the prospect of possible arrest in London. A British TV crew tried to force its way into her house in Berlin for an interview. She was by then eighty-four and fragile. She called out for help to her bed-ridden husband Len who hobbled to the door and beat the reporter out with his crutches. ‘It was then I realised there were people in England who were out for my blood,’ she said and cancelled her trip. It took persuasion and the support of a friend, who accompanied her from Berlin, for Sonya to return to England. The book launch for Sonya’s Report took place on 18 November 1991. She was honoured by her left-wing colleagues and other veterans from the British Communist Party. She was reunited with her three sisters living in England and also members of the CP and reconciled with a fourth sister, from whom she had been estranged for many years. Forty years after living there, she also travelled to our former home in Great Rollright and was finally able to lay flowers on the grave of her parents, my grandparents, in the village churchyard. Interviewed by a (friendly) reporter from Oxford, she explained: ‘I’m not sentimental. I wanted to come back to the place where I was happy with my children, to revisit the Cotswolds. When life was difficult’ – and life was often very difficult for her – ‘the best thing was a walk in the Cotswolds.’

I remember our Cotswold home. It was built of grey-yellow limestone and was certainly more spacious and more picturesque than my mother’s small semi-detached house back in the GDR. But she was taken aback when another report about her visit to England in 1991 stated that, ‘Ruth Werner had little to show for her commitment [to the GDR and socialism] living in a shabby prefab in a squalid corner of what was Berlin’s former Soviet sector’. The article in question had been written in the Daily Express by none other than Nigel West, a well-known author on espionage who, as it happens, had visited my mother only a few months previously in East Berlin.

There is a fascinating rider to this story. Many years before this in 1984, some English relative or friend smuggled into the GDR a secondhand paperback copy of Nigel West’s A Matter of Trust about MI5 activities from 1945-72 – in which my mother was mentioned. Obviously such literature was not available in Socialist Germany – and it made engaging reading for her. She then passed it on to GDR Foreign Intelligence, remarking that it contained interesting information and might be worth ‘translating for internal use’. Since my mother’s death, Nigel West’s book has been sitting untouched on my bookshelf – until recently, when I picked it up and noticed that Nigel West had added a dedication to the title page after he had visited her in Berlin in 1991, writing: To Ruth + Len with best wishes from Nigel West, 17.IV.1991. A few months later, in London, he was writing hypocritical nonsense about her ‘squalid’ living conditions!

My mother died in a reunited Berlin in 2000 aged ninety-three. In spite of her enormous disappointment over the downfall of socialism, she was still optimistic about the struggle for a better and more equitable world in the future. Since the fall of the wall, she has featured dozens of times in ‘spy literature’. I must say, I hardly recognise her in most of them. They err even in the simplest details, often with outrageous blunders as one writer copies from and expands on the previous one. There is also a film script in existence (thankfully never made) in which she and a fellow spy are shown having sex on the floor while engaged in a delicate operation. In reality one second of inattention (let alone repeated sex) could have meant death.

Therefore you can imagine my relief when I learned that the renowned author and espionage specialist Ben Macintyre wanted to write about my mother’s life. He has interviewed my brother Peter and myself about her a couple of times and I am confident that his biography will at last provide a fair assessment of the life and achievements of a remarkable woman.

There’s one thing nagging me though. In a passage about my mother in Nigel West’s book, readers are informed that, ‘She promptly fled to Switzerland, taking her two daughters with her.’ All right, my sister Nina accounts for one daughter. But what about number two? Have I been deceiving myself about my sex all these years? I hope not.

Maik Hamburger lives in Berlin. He is a translator, writer and dramaturge and is one of the leading Shakespeare scholars of his generation in the German-speaking world. He was a spokesperson for New Forum in 1989.