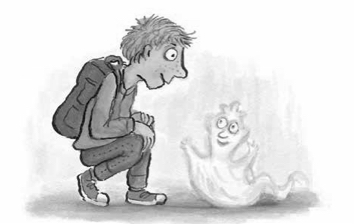 ‘I don’t,’ said the ghost. ‘I live in keyholes. Really truly.’ Then it looked questioningly at Paul. ‘What sort of castles?’

‘You know, big castles. The ones where kings live, and knights and princesses.’

‘Are you a king?’ asked the ghost.

The ghost waved its right hand a bit and said: ‘Not at all.’

Paul almost burst out laughing. ‘No, not “are you cold”, what are you called? Do you have a name?’

‘Why not? It sounds really big and dangerous,’ said the ghost, spreading out its little arms as if it was trying to scare Paul. It floated to and fro on Paul’s knee with a very serious face and a clenched fist. ‘Oh, tremble, one and all! You kings and knights and Pauls and all, hear my name and tremble, here comes Karaputzo . . . Ah . . . what was my name again?’

Paul had to laugh. ‘Do you know what a ghost train is?’

‘Yes, but there are really big ghost trains too.’

‘Not here, they’re much too big for my room. They have them at funfairs.

They’re so big even grown-ups can go on them. And get scared.’

‘What are the grow-nups scared of? They scare me!’

Zippel laughed and laughed: ‘They don’t need to be scared. I won’t hurt them. Really truly.’ He shook his head. ‘Grow-nups are really daft sometimes.’

‘The ghosts on a ghost train are very ugly,’ said Paul. ‘Gigantic, with blood round their mouths and their eyes hanging out and an axe in their heads, and they groan or suddenly scream.’

‘Oh, are they all hurt?’ asked Zippel. ‘Is the ghost train a hospital for ghosts?’

‘No, they’re not real ghosts at all, just gruesome-looking puppets to give people a fright. We can go and see when it’s the Oktoberfest again.’

‘No, the Oktoberfest is in a few weeks.’

‘Afeweeks?’ asked Zippel. ‘Is that a big city?’

Alex Rühle studied comparative literature, French, theology and philosophy in Munich, Paris and Berlin. He is a renowned journalist and works as a culture editor for Süddeutsche Zeitung. He lives in Munich with his family.

Rachel Ward studied literary translation at the University of East Anglia. She still lives in Norfolk today, where she works as a freelance translator from German and French, specialising in crime fiction, children’s books and non-fiction.

Axel Scheffler is an award-winning, internationally acclaimed illustrator of some of the most well-loved children’s books. His books have been published in many languages and his work has been exhibited all over the world.