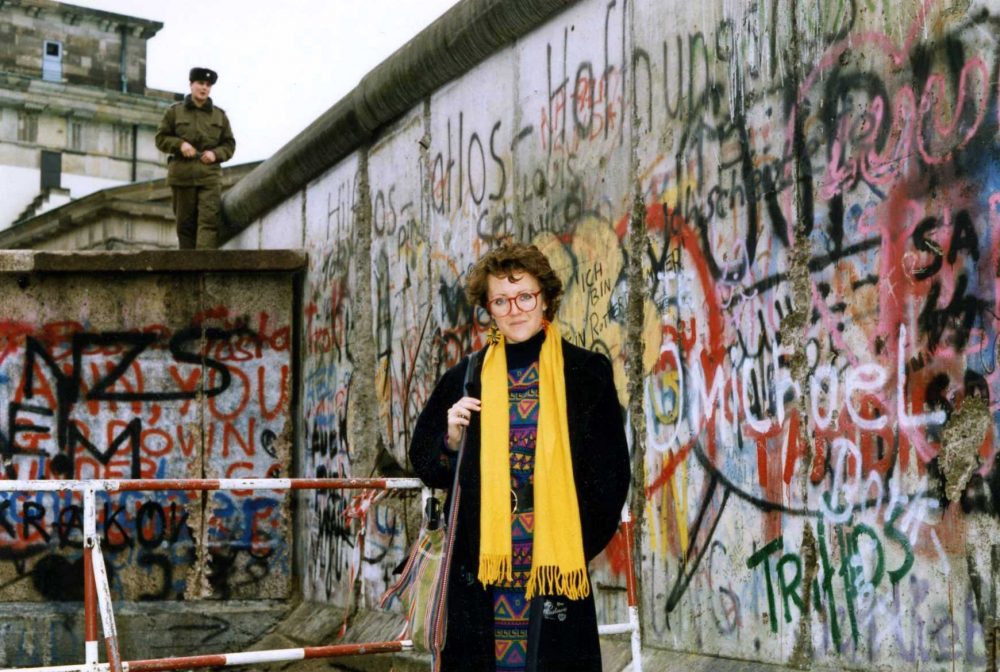 Autumn 2019 is a significant personal and professional anniversary for me. Thirty years ago I began working for BBC Radio, travelling round Europe, producing and reporting from ‘revolutionary’ locations. By far the most significant event was the fall of the Berlin Wall in November – and I was there. I had studied German and its literature. Germany is key to my existence. It was my home for nearly a decade; its history has engaged me all my life and our bookshelves at home groan with books on Germany. I’ve continued to visit and engage with Germany for the past thirty years with unwavering interest. For this special edition of The Riveter I have called on many friends, publishers, authors, translators and academics who share this interest and asked them to offer their views and reviews of these remarkable three decades. This magazine is both a celebration of German literature in English translation and also a reflection: which books from those thirty years do we really value? What has worked on the English language market and what has not? What does its literature tell us about Germany today?

In the UK we like reading about Germany. Mostly, though, about the past – the war, Nazis, Hitler, Weimar. How often do I hear, ‘Where are today’s German Greats?’ We obviously still read and buy Goethe, Brecht, Grass, Sebald, Mann, Fontane, Rilke – there are many and they are indeed Great. The translation of the newly discovered German classic by Hans Fallada was a well-deserved bestseller in the UK, as was Bernhard (The Reader) Schlink and Timur Vermes’ Hitler satire. Other authors – some of my favourites, like Jenny Erpenbeck, Herta Müller, Volker Weidermann, Benedict Wells, Volker Kutscher and Daniel Kehlmann – have been successful but, as with most good German fiction, they are greatly respected but sell modestly. In spite of their skill and their fascinating accounts of the upheavals of the past thirty years, contemporary German literature has rarely broken through into the Great British mainstream.

The UK book market is stubborn. We still only read about five per cent of our books in translation. Most of that comes from Europe, but little from Germany. Learning German is not popular in schools. Why is this? Stereotypes prevail. German is considered stodgy and hard, the literature heavy, long, male and worthy – which are outdated, unfair views. Our regressive anti-European sentiments in the UK don’t help. The German Riveter hopes to reverse that trend. Yes, we do live in hope.

German literature has many champions in the UK. Apologies if I don’t name you all – my appreciation is limitless but space limited. So let me mention, by way of excellent example, those German-linked publishers Pushkin, And Other Stories, MacLehose, Peirene and Haus, and a few of our outstanding translators, Karen Leeder, Jamie Bulloch, Shaun Whiteside, Charlotte Collins, Ruth Martin and Katy Derbyshire (who has herself recently become a publisher and will be the Translator-in-Residence at London Book Fair in 2020). Also, loudly banging the German Tin Drum are New Books in German, the Goethe-Institut, the German Embassy and our many passionate champions of German language and literature such as Katrin Kohl, Charlotte Ryland, Caroline Wyatt, Anne McElvoy, Katharina Bielenberg, Frederick Stüdemann and Max Easterman. You may have heard another drum beating loudly too, the anti-Brexit, pro-Europe drum, beaten by none other than our most famous German citizen in the UK, the illustrator Axel (The Gruffalo) Scheffler, who has generously designed our cover.

Looking back over my own German reads, reviews, interviews and events from the past thirty years, some of my personal highlights have been literary encounters with authors such as Saša Stanišić (who won this year’s German Book Prize), Birgit Vanderbeke, Julia Franck, Friedrich Christian Delius, Matthias Politycki, Judith Hermann, Ingo Schulze, Ludwig Steinherr, Thomas Weber and Maik Hamburger. Not to mention a few of my special favourites writing about Germany in English – Frederick Taylor, Rory MacLean, Rachel Seiffert and the sadly now-passed Philip Kerr. I can’t thank all of them enough for broadening my mind, often making me laugh and touching my heart. And what do they all write? They write in every possible genre – satire, thrillers, poetry, short stories, novellas, children’s stories, biographies, essays and multigenerational family epics. Some of them even write about the Second World War, the Holocaust and the Nazi past – and I hope they always will, because we must never forget.

My latest discoveries, thanks to The German Riveter, are legion: Nora Krug’s graphic novel Heimat is one example of the exciting boom in graphic novels in Germany and Nino Haratischvili’s The Eighth Life restores my faith in the blockbuster page-turning epic. Nora lives in the US and Nino is Georgian. And if you haven’t read German-Turkish writers Emine Sevgi Özdamar and Feridun Zaimoğlu, start now. For all of us worried about these issues, take note: German writers today are a diverse lot – and lo! – they are often women.

In the wake of the fall of the Berlin Wall – and the profound challenges of German reunification – a whole new generation of writers and literary genres have sprung up, creating a wonderful diversity of writing with a distinctive multicultural agenda and a less rigid notion of German identity. We are missing out by not reading them. Thirty years since that great earthquake, as we enter the post-post-wall period, surely it is time for us to reassess our narrow views and read more German literature?