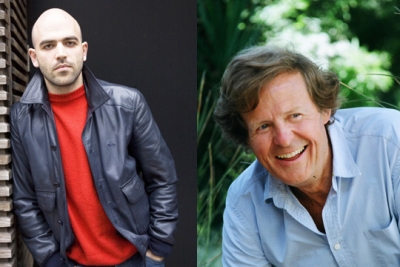 The Freedom of the Writer: David Hare and Roberto Saviano

English PEN announced an unmissable fundraising event with PEN Pinter 2011 winners David Hare and Roberto Saviano. In their first public conversation Hare and Saviano will discuss the freedom of the writer and reflect on their own – very different – journeys as writers. The event will take place at 7pm on Thursday 26 May at the Emmanuel Centre in Westminster, Marsham Street, London. Tickets available here.

In 2011 playwright and director Sir David Hare accepted the PEN Pinter Prize awarded by English PEN for – in the words of Harold Pinter’s Nobel speech – showing a ‘fierce intellectual determination … to define the real truth of our lives and our societies’. In his work for stage, David Hare reflects the issues of contemporary British society and has tackled key institutions including the Anglican Church, the legal system and the Labour Party.

Acclaimed Italian investigative journalist Roberto Saviano has been living under police protection since 2006 after receiving death threats from criminal organisations following the publication of his book Gomorrah, in which he exposed the workings of Neapolitan crime syndicate the Camorra. He was chosen by David Hare to share the 2011 PEN Pinter Prize as the International Writer of Courage for risking his life in the pursuit of truth.

In this special fundraising event to support the work of English PEN, David Hare and Roberto Saviano will meet to discuss the creative freedom of the writer and the limits of free speech, as they reflect on their own very different careers.