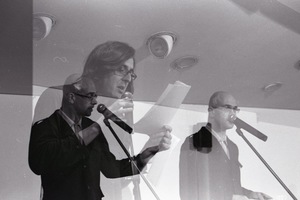 The European Camarade in November in London

A mini-festival of European poetry in collaboration in the heart of London. Join nearly two dozen poets from across the continent presenting brand new collaborations in the literary and avant-garde traditions, firmly rooted in 21st century poetic practise, in one of London’s hubs for modern literature.

The Camarade series explores collaboration exclusively between poets, taking the form of events which pair writers to produce and premiere new collaborative poems or artworks, to be performed live. The European Camarade will pair European poets from outside of the UK with British counterparts. Featuring some of the most dynamic poets & textual artists working across the contemporary European scene, this event will evidence the cross continental dialogue so prevalent in the avant-garde and literary scene.