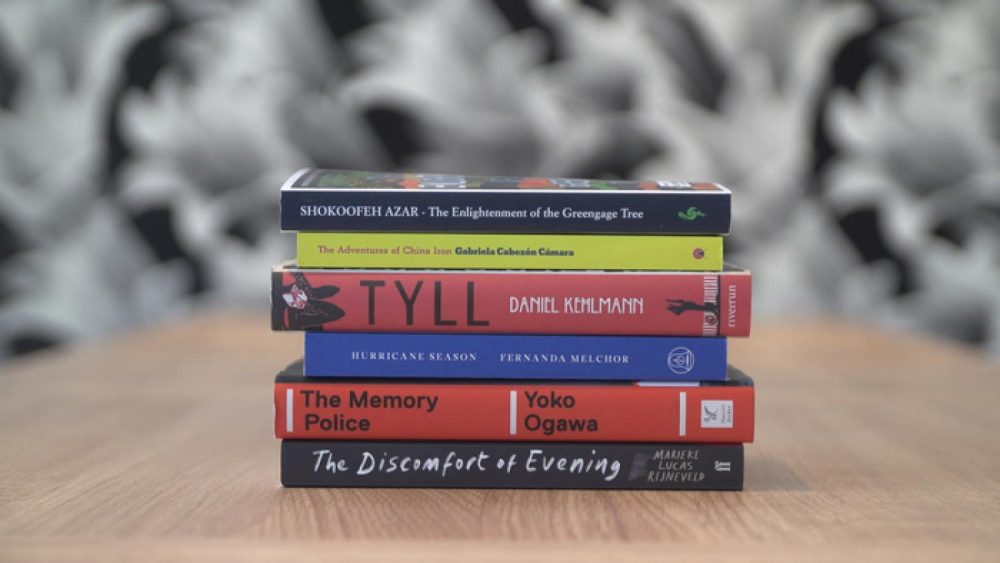 The Enlightenment of the Greengage Tree by Shokoofeh Azar (Farsi-Iran), translated by Anonymous, published by Europa Editions

‘Each of our shortlisted books restlessly reinvents received narratives, from foundational myths to family folklore, plunging us into discomforting and elating encounters with selves in a state of transition. Whether capturing a deftly imagined dystopia or incandescent flows of language, these are tremendous feats of translation, which in these isolating times, represent the pinnacle of an art- form rooted in dialogue. Our shortlist transcends this unprecedented moment, immersing us in expansively imagined lives that hold enduring fascination.’

This year’s shortlist features titles translated from five languages: Spanish, German, Dutch, Farsi and Japanese. The shortlisted authors hail from six countries and their books examine humanity’s need to understand the world through narrative, either through sharing our own stories, through understanding our histories and origins, or through processing trauma and grief.

Three of the novels, The Enlightenment of the Greengage Tree by Shokoofeh Azar, The Adventures of China Iron by Gabriela Cabezón Cámara and Tyll by Daniel Kehlmann have been inspired by their nations’ histories – namely the 1979 Islamic Revolution in Iran, gaucho culture in 1870s Argentina, and the Thirty Years’ War in Germany. Each of these books borrows existing myths, legends and origin stories but reinterprets these tales with modern sensibilities, celebrating the pursuit of intellectual freedom, the exploration of sexual identity, and survival in the face of political unrest and sweeping illness.

The other three shortlisted titles, Hurricane Season by Fernanda Melchor, The Memory Police by Yoko Ogawa and The Discomfort of Evening by Marieke Lucas Rijneveld all touch on how trauma, whether through violent acts or emotional loss, shape our experiences and approach to the world. Fernanda Melchor’s Hurricane Season opens with the gruesome discovery of a murder victim, but the novel’s narrative drive quickly shifts to asking, ‘Why?’ rather than ‘Who?’ and through the characters’ stories we are introduced to a world governed by poverty and violence, misogyny, and prejudice. In The Memory Police, Yoko Ogawa explores the power of memory, and how much our memories define us, and the trauma of loss. Loss is also a central theme of Marieke Lucas Rijneveld’s The Discomfort of Evening, a story that recounts the breakdown of a devout family after the untimely death of one of their children.

The International Booker Prize is awarded every year for a single book that is translated into English and published in the UK or Ireland. It aims to encourage more publishing and reading of quality fiction from all over the world and to promote the work of translators. Both novels and short-story collections are eligible. The contribution of both author and translator is given equal recognition, with the £50,000 prize split between them. Each shortlisted author and translator will receive £1,000, bringing the total value of the prize to £62,000.

This year the judges considered 124 books.

Together, the two Booker Prizes reward the best fiction from around the globe that is published in English in the UK and Ireland. The Booker Prizes are sponsored by Crankstart, a charitable foundation.