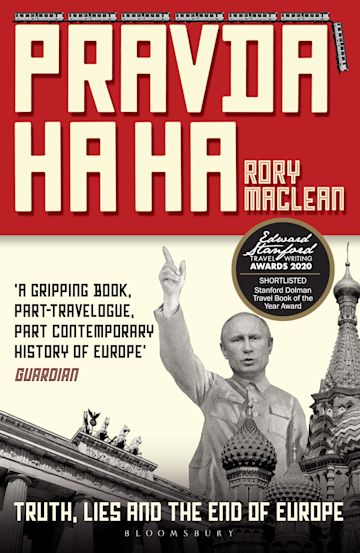 This is an extract from Pravda Ha Ha: Truth, Lies and the End of Europe by Rory MacLean, published by Bloomsbury, 2019; it is reproduced here with kind permission of the author and publisher.

Autumn’s rains arrived as a sigh, stealing into the night, hissing into the warm earth, all but unheard by the city’s sleepers. By the million they shifted in their beds, rolled away from the window as if from the seasons, as if from the inevitable. Outside, the whispers turned to rattles, unbinding papery samara and drumming desiccated leaves down to earth. Startled birds shook their feathers, darted between drooping branches and tree tops. Seed heads and whirligigs twirled onto the pavement, washed into crevices and cracks, clogged the drains.

At dawn the showers stopped, leaving the streets carpeted with debris. The sleepers now pulled up their shutters, lit first cigarettes, walked dogs and cycled over the dappled curl of leaves, seed pods popping beneath their glistening tyres. Prams and skateboards then appeared in high-arched doorways. Young families emerged into the scrubbed air, tumbling past salmon-pink mansions and alongside grey canals. Elderly couples sauntered arm in arm around golden cupolas glazed with the slick of rain. In the Mikhailovsky Gardens, children rode docile ponies, danced around street musicians, begged to be photographed with the tame raccoons and doves. Their parents idled at open-backed coffee vans, ordered double espressos, scolded fox-nosed Shibas and spoilt miniature poodles. In Mars Field, the tsar’s old parade ground, teens played three-a-side frisbee near to the Eternal Flame. At trendy Bekitzer, young entrepreneurs chilled over Israeli street food or checked out the latest Co-op Garage pizzas (salmon with quail eggs, duck confit with rocket).

Russia’s imperial capital had something worldly about it, a noble seat at the edge of the continent, looking west across the Baltic to Europe. Peter the Great – the first tsar to venture beyond Russia’s borders – had created it in the early eighteenth century. He’d drained the swamps, raised sea walls and pressed 30,000 serfs, convicts and Swedish prisoners of war into digging hundreds of miles of canals. Italianate mansions came to line the River Neva. Baroque and neoclassical palaces rose around wide piazzas. Peter spoke French at court, banned boyars’ beards and imported locksmiths, shipwrights and even a Dutch vice-admiral. In his determination to modernise the country, he also founded the Kunstkamera, the first public museum in Russia. He crammed its glass cabinets with curiosities: pickled Siamese twins with three arms, the skeleton and heart of the world’s tallest man, a unicorn horn (actually a narwhal tusk). In his hand he held a child’s shrunken head embalmed in Nantes brandy, distilled with pepper and spices. Peter wanted to rid his people of their belief in ‘diabolical spells through sorcery and the evil eye’, to debunk their superstitious dread of monsters, to show that even the world’s worst deformities were the Work of God. He wanted to banish fear. But he hadn’t reckoned on the mendacity of his successors.

Two reasons had brought me to St Petersburg – cyberwarfare and President Putin – as the city was the home of both of them. After dropping our bags at the hotel, Sami and I caught the metro to Mayakovskaya and walked to a three-storey grey and yellow building near to Nevsky Prospekt. Behind the open gates of its courtyard, a young mother in pink pyjamas and rabbit-eared dressing gown smoked a cigarette. A passing drunk – gone to seed like the flower beds – confirmed that we had the right address. Vladimir Vladimirovich Putin had been born here at the Snegiryov maternity home in 1952 (the drunk actually said 1917 and then asked me for five dollars).

Ten minutes further along Ulitsa Mayakovskogo, beyond the Liverpool Bar and Pub Corleone (decked out respectively with Beatles and mafia memorabilia), we turned into drab Baskov Pereulok, a dead-straight street lined by rough, geometric, workers’ tenements. Putin had grown up at No. 12, in a shared apartment with no hot water, no bathtub and plenty of rodents.

‘I used to chase them around with sticks,’ he wrote in his quasi autobiography First Person. ‘I spotted a huge rat and pursued it down the hall until I drove it into a corner. It had nowhere to run. Suddenly it lashed around and threw itself at me. I was surprised and frightened. Now the rat was chasing me.’

Some historians alleged that Putin had endured an unhappy childhood – abused by an alcoholic father, suppressing homosexual tendencies, even suffering a stroke in utero – while others portrayed him simply as an unremarkable child, of average intelligence living in typical Soviet conditions. Many of the assertions had little basis in fact, unlike the certain knowledge that the incident with the rat had taught him that a cornered prey is unpredictable.

Putin’s father, Vladimir Spiridonovich, had served in both the Red Army and an NKVD destruction battalion. His mother, Maria Ivanovna, had collapsed from hunger during the Siege of Leningrad, and was presumed dead. Putin’s birth had been preceded by the loss of two brothers, one of whom died of diphtheria. To defend himself he took up judo and sambo, a Soviet martial art and combat sport. While still at school, he walked into the KGB headquarters on Liteiny Prospekt and announced that he wanted to be a spy. In the reception room he was told to get a degree, preferably in law. He obliged, studying at Leningrad State University and joined the organisation on graduation. He worked both in counter-intelligence and at the First Chief Directorate, where he was groomed for service abroad.

In 1985 he was transferred to Dresden and again accounts differ as to his actions. One biographer, Masha Gessen, wrote that in the East German backwater ‘Putin and his colleagues were reduced mainly to collecting press clippings, thus contributing to the mountains of useless information produced by the KGB.’ In contrast his official biography records that, on the night of the fall of the Wall, he heroically fed top-secret KGB files into a furnace.

On the long drive home to the crumbling empire, Putin was haunted by the loss of purpose and pride. The political and ideological system to which he and his parents had dedicated their lives had been shattered. Once back in St Petersburg, he was filled with redemptive purpose, and determined to restore Russia’s power. At first he was a ‘careful, unenthusiastic, diminutive’ apparatchik, remembered former US Ambassador Michael McFaul. Yet during the course of the 1990s, by hook and by crook, he rose to become the city’s deputy mayor and then – thanks to powerful friends – a Kremlin aide, intelligence chief and finally the anointed successor to Boris Yeltsin.

As president he oversaw Russia’s transformation into an audacious and ambitious kleptocracy. He boosted his authority by destroying challengers and then grabbing the institutions and resources that they had plundered. Yet even as he amassed unimaginable wealth, again according to McFaul, he grew vindictive, grudging and obsessed with respect. After the trial of billionaire Mikhail Khodorkovsky, and the death of kingmaker Boris Berezovsky (found hanged in his ex-wife’s Berkshire home), Putin called the other oligarchs to the Kremlin and told them to support him, or else.

‘It is time for Russia to get off its knees,’ he declared and set about spinning false narratives. He nurtured the old chestnut that enemies still surrounded the country. To substantiate the lie, he triggered or manipulated wars in Chechnya, Georgia, Ukraine and Syria. He worked to fuel angry insecurities and nationalist resentment, calculating that enemies were more valuable to him than friends.

Putin placed his trust in one key group alone, reviving the KGB and making it subordinate to no one. Its – and his – objective remained unchanged from Soviet days,: to project Russian power and to undermine open society. More than thirty independent journalists have been murdered on his watch. Politicians rash enough to challenge him tend to either drop off the ballot paper or drop dead. Pro-democracy demonstrations – such as those that outraged him in Dresden in 1989 and Kiev in 2004 – are repressed by riot police. His use of violence has made it impossible to hold free elections, to try cases in court, to maintain the rule of law. Under Putin, pluralism has become seditious. He has degraded the political order, flexed his muscles from Aleppo to Pennsylvania Avenue, and become the richest man in the world.

On Baskov Pereulok, Sami and I gazed at the unmodernised tenement, unadorned with balconies or aesthetic value. Its two security cameras stared back at us. Around the doorway hung the nameplates of the business that now occupied Putin’s childhood home: the Long and Happy Aid-to-the-Elderly Foundation, the St Petersburg Boxing Federation and – I kid you not – the Foundation for Future Leaders. I buzzed its intercom, the security camera tilted towards me but no one answered. Across the road the owner of East-West Antiques told us, ‘The President never comes back. He lives in a nicer house now. You are the first tourists.’

Together we retraced our steps to Ulitsa Mayakovskogo, turning right towards Liteiny Prospekt and the Neva. In five minutes we reached the Big House, as locals called the massed block of granite in which a teenage Putin had offered himself to Russia. As we gazed at the KGB headquarters, I told Sami I couldn’t believe that Vladimir Putin really considered the collapse of the Soviet Union – with its history of state terror, death-camp gulags and the forced starvation of millions – to be ‘the greatest geopolitical catastrophe of the twentieth century’. Or that he was motivated by wounded pride alone. Or that he had the gall to drive resurgent Russia towards armed conflict because of his encounter with a ballsy rat. Surely he had taken to heart the lessons of all the bloody years?

On the Neva, two pink granite Egyptian sphinxes – originally from ancient Luxor – stand on the embankment in front of the Academy of Arts. A few hundred yards upstream, a stone’s throw from the Big House, crouch two other, modern sphinxes. On one side the bronzes appear to be the most beautiful creatures: feminine, pensive, full-breasted. Yet on the other side their faces are hollow-eyed skulls. The artist Mikhail Shemyakin created them to pay tribute to the victims of political repression, siting the monument at the spot where the drains from the KGB basement had poured blood into the river.

Chekhov once foresaw that in his homeland ‘a type of toad and crocodile will come to power more frightful than anything that ever came out of Spain’s Inquisition – a narrow-minded, self-righteous, overbearingly ambitious type, totally lacking in conscience. Charlatans and wolves in sheep’s clothing will be able to lie and dissemble to their heart’s content.’

Sami and I stood in silence beside the haunted sphinxes, with the smell of autumn in the air.