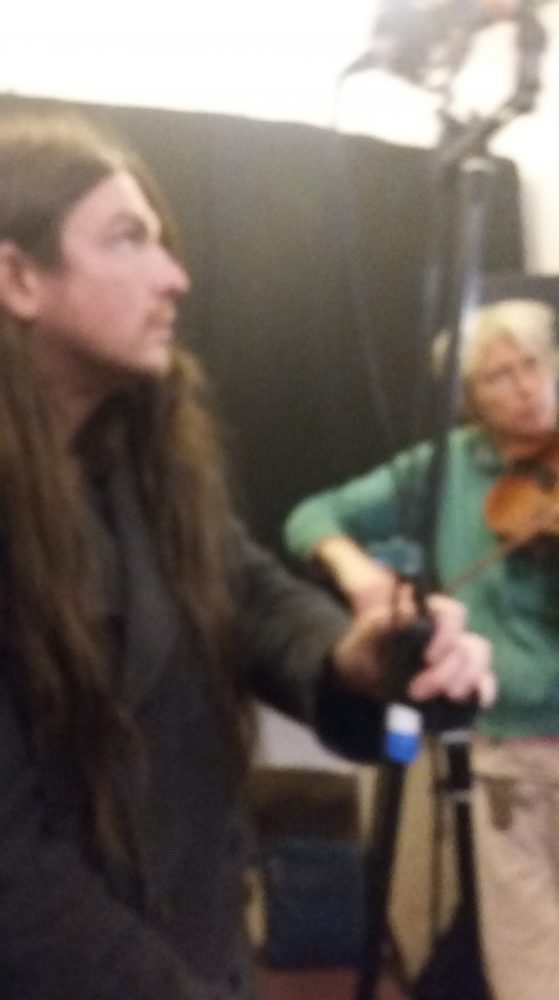 Snow Q: Probably the most Patient Man in the World/Behind the scenes with Simon, Peter and Ellie by Maria Jastrzębska

In a small studio in Kemp Town in Brighton magic has been taking place. The magician is sound engineer Simon Yapp.  He’s already recorded Rita’s performance of some of Maria’s poems and is now working with Maria’s collection of sounds – plus a list of requests – for a sound poem. Could he get some better crows because the ones Maria had were too muffled? Sure, said Simon. Maria, Dagmara and Wendy then visited and told Simon that on reflection we’d like to change the sound poem completely and could he enhance the sounds in a different way. I see, said Simon.

We used some of Simon’s sound recordings of Rita at the Snow Q Preview for Lewes Live Literature on Dec 1st and they went down very well.  Recently Peter and Ellie Snow Q’s talented viola player have been in to record Peter’s music. Without Simon’s patience and immense technical skill, a lot of what you will hear on Dec 21st simply wouldn’t happen. If you’ve only just joined this blog the 21st is our collaborative installation at Regency Town House Annexe Basement re-imagining Hans Christian Andersen’s Snow Queen. If you haven’t booked yet, hurry! Tickets: https://www.eventbrite.com/e/snow-q-performance-tickets-51999911134

We’re very proud to introduce Ellie Blackshaw here. She will be bringing Peter’s music to life both via recordings and live on Dec 21st. We feel lucky to have her on team Snow Q. This is what Peter says about her:

Last Monday, Ellie recorded most of the music I have composed for Snow Q, which is where the photos were taken. My previous blog gave a number of reasons for why I composed the Snow Q music for solo viola. Those that I gave were all perfectly valid ones but I inadvertently left out one of the most important.

I have known Ellie since her early teens and therefore outside my immediate family, longer than almost anyone else with whom I am in regular contact. Over several decades, the number of occasions we have performed together in orchestras, chamber ensembles and other ad hoc groupings must by now run into nearly four figures!

As both a violinist and viola player – only Americans use the expression ‘violist’ – Ellie has probably played more of my compositions than any other performer but until now I had never actually written anything specifically with her in mind. I therefore decided to remedy this with the Snow Queen music.

I was very happy to hear Ellie’s developing interpretations for the first time at the recording session. We had previously rehearsed the music but that was more in the nature of a ‘read-through’. I’m therefore really looking forward to the next one and also, of course, to the live performances on the 21st.

This blog was originally published on Snow Q Project‘s website on 7 December 2018.