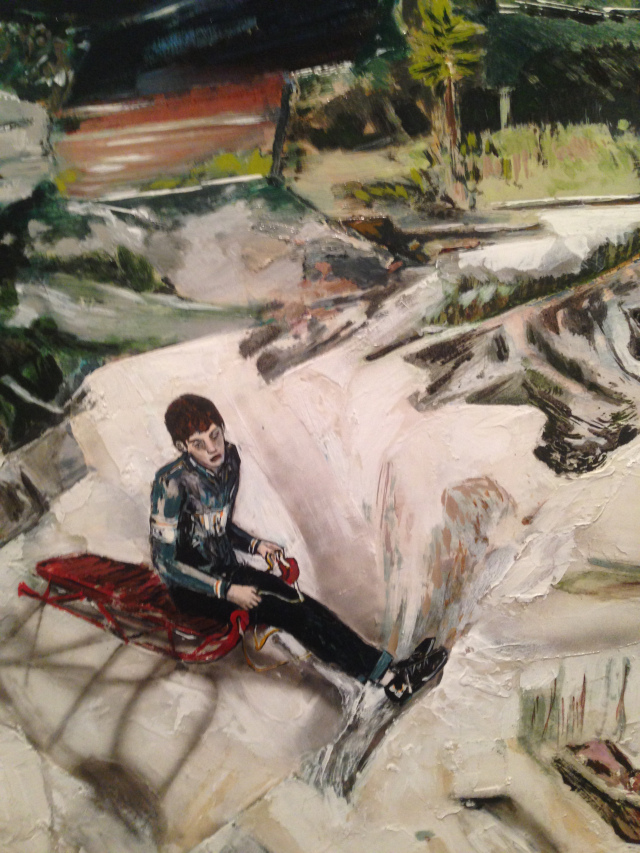 All through this year’s glorious U.K summer we’ve been thinking about snow and ice –  literally and metaphorically – for our project to reimagine Hans Christian Andersen’s Snow Queen story. The nights are drawing in now, the wind is cold and we’re getting  closer and closer to our event. Scroll down for more information & how to book.  (Maria tried to chase the sun but found she couldn’t escape.)

On a short break in beautiful Málaga, not only did the rain catch up with me, but who should I bump into: Mr Andersen who travelled to Málaga in 1862, on one of the ‘first cultural tours of the 19th century’. Here is a sculpture of him by Maria Córdoba in the Spanish town he said he felt ‘most happy and comfortable’ in.

As if that wasn’t enough at CAC (Centro de Arte Contemporáneo de Málaga) I found myself mesmerised by this and other paintings by Hernan Bas – all of men or boys. It’s called Thawing.

Paintings of men/boys generally hold a currency of ‘everyman’-ness while women are interpreted very differently in the art world which in turn determines how non-binary people are seen. Bas’ young men in the exhibition are referred to as androgynous. I’ve yet to see a major exhibition by an out lesbian artist.

Nevertheless I was enchanted by this artist’s work: his exploration of adolescence, the shifts between past and present in his paintings, of which he says that he likes to make images ‘that describe the middle of the story, maybe the intermission, but never the end’.

Back to Snow Q EVENTS: On December 1st at 4pm Lewes Live Literature presents a sneak preview from Snow Q. Maria Jastrzębska will talk about the Snow Q project, with performances by actor Rita Suszek of new text written in the curious hybrid language of Ponglish (half English / half Polish). An intimate try-out of a new work in progress at the secret space that is LLL HQ. Numbers are very limited and entry is free but by invitation only.  If you would like to come please contact: [email protected]gmail.com.

On December 21st between 4pm and 9pm Snow Q presents its COLLABORATIVE INSTALLATION at the Regency Town House Basement Annexe in Brighton/Hove. For all the information about our event please go to our Snow Q event page or click HERE – we recommend booking! This will be the culmination of this phase of our work. Which isn’t the same as the end of course…

This blog was originally published on Snow Q Project‘s website on 19 November 2018.