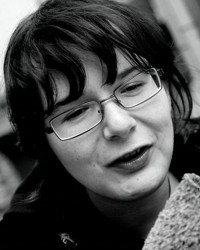 Ivana Dobrakovová graduated from Bratislava’s Comenius University with a degree in English and French (translation and interpreting). She is based in Turin where she works as a freelance translator from French and Italian, currently working on Elena Ferrante’s Neapolitan novels. She debuted in 2009 with her short story collection Prvá smrť v rodine (“The First Death in the Family”), followed by the novel Bellevue (2010). Her most recent collection of short stories Toxo appeared in 2013. She has won several literary competitions, including Poviedka 2008, and all three of her books have been shortlisted for the Anasoft Litera prize.

Ivana Dobrakovová will appear during the Slovak Euro Stars on 17 May at Waterstones Piccadilly, together with Balla and Julia Sherwood. The event will be chaired by Rosie Goldsmith. Two books will be launched at the event: Balla’s latest book in English, In the Name of the Father (Jantar, 2017) and the anthology of Slovak writing,  Into the Spotlight: New Writing from Slovakia (Parthian Books, 2017) containing writing both by Balla and Ivana Dobrakovová.