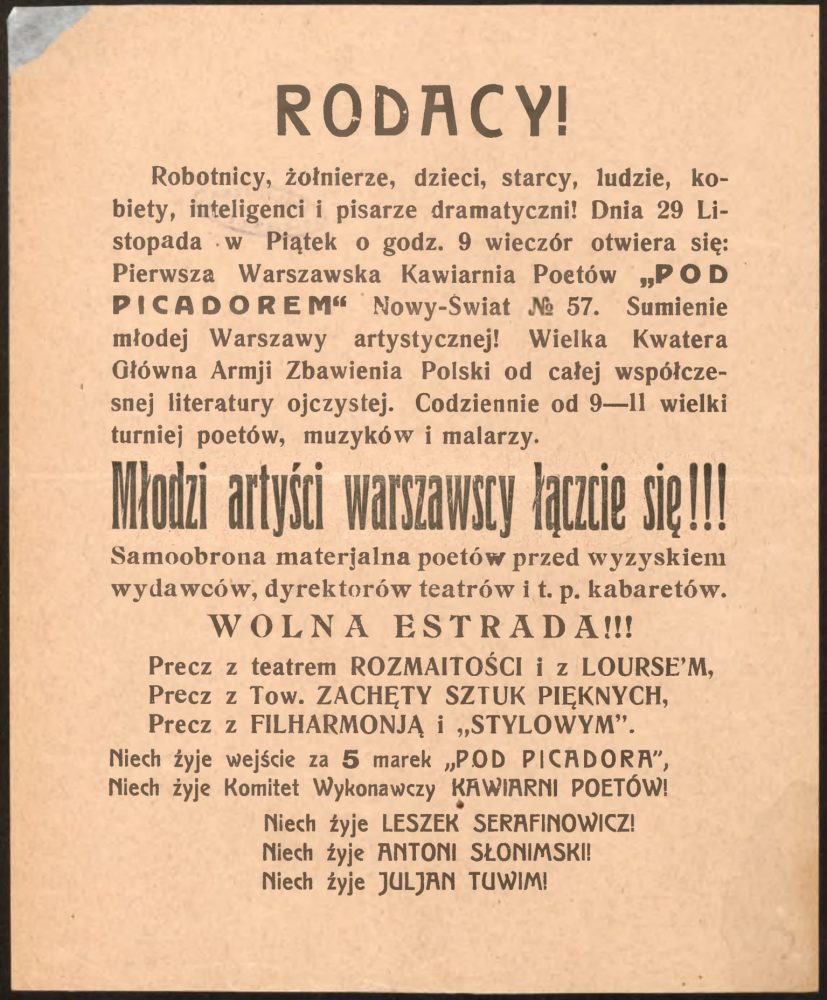 On 29th November 1918, two weeks after the Polish flag was hoisted above the skies of Warsaw for the first time since 1795, the Pod Picadorem café, designed to be the first poets’ café in the new Poland, was planning its grand opening. The paint on its walls was still drying in the rush to establish the venue.

Their leaflets advertising the launch had fluttered across Warsaw in the cold late-November wind, the words ‘rodacy’(‘compatriots’) and ‘wolna estrada’ (‘free platform’) just visible below an invitation for all to attend the event on the elegant Nowy Świat street. The cafe promised to be a hub of Polish national sentiment expressed through art, where the intellectuals of a new era could congregate.

It must have been surprising, therefore, to hear the discussions in the café so unashamedly avoiding the topic of patriotism, an idea which had preoccupied the Polish cultural diaspora for the previous 123 years.

The names of three key speakers, Leszek Serafinowicz, Antoni Słonimski and Julian Tuwim, were on the publicity for the launch. These were the young innovators who were beginning to pave the way for a new, revitalised Polish literature, to focus on their ideals of youthful joy of life and an unpolitical and innocent examination of existence – a world away from the national struggle. These three men were only in their twenties at the opening of Pod Picadorem, but this was a rich beginning to their careers in the public eye, their ideals blossoming quickly among the young intelligentsia.

Following this initial success, a flurry of works by Serafinowicz, Słonimski and Tuwim were published in the monthly Pro Arte et Studio, which was linked to the University of Warsaw. Prior to their involvement, the magazine had covered a diverse explosion of the many ideals of the new Polish Republic – but after linking up with two other protagonists of the new burgeoning literary style, Jarosław Iwaszkiewicz and Kazimierz Wierzyński, Pro Arte et Studio was transformed into a prototype periodical and literary hub for the Pod Picadorem circle, with an eventual name change to the more evocative Pro Arte in 1919.

Pro Arte was dissolved later that year, in preparation for the birth of a new periodical in January 1920, which would finally unite the five-strong group under one title: Skamander. This name was a testament to their integral vision for a ‘vibrant present’, with ties to the fantastical. The origins of the word lie in the mystical Skamander River which cut around Ancient Troy, and drew on a quote from the Romantic Stanisław Wyspiański in his Akropolis: ‘Skamander połyska, wiślaną świetląc się falą.’ (‘Skamander shines, glowing with Vistula waves’). But this allusion to Wyspiański also epitomised the ambivalent position of Skamander in Polish literary history. The group’s aims, like many modernists in the Polish interwar period, would be to both obscure and to celebrate Poland’s past literary exploits, with Polish history an inevitable foundation of their work while still reaffirming their own originality. The manifesto in the first issue of their magazine claimed that their only agenda was a focus on the present, and this core ideal remained central to Skamander. Throughout the 1920s, each of the five individuals wrote in different styles, suggesting that the group itself was founded on disconnect and indecision.

Certainly, the texts produced by the group were varied in their overwhelmingly naïve and idealistic approaches to reality, and it has been said that the members were aiming for literary liberation, or even mere fun, rather than a determined artistic movement. But alongside this, their works were highly accessible, using the language of everyday life in an effort to appeal to all Poles. The advent of Polish futurism in the early twenties was posited as opposition to Skamander.

For the five individual Skamander members, their disjointed, disconnected writings meant that their fans (especially among Warsaw schoolgirls) were divided into two camps: Tuwim’s fans and Wierzyński’s fans.

Skamander has been described in a plethora of different ways: as Poland’s traditional avant-garde; as risk-averse pioneers of literary style and even as opponents of Polish modernism – though these definitions were not necessarily a negative in the context of the insecure world of the early Polish interbellum. With turmoil and tragedy so recent in Poland of the 1920s, change could only happen gradually, which was why Skamander’s relaxed approach – translated stylistically into a simple and hopeful language – went down so well with the Polish public. Skamander were about trial and error and youthful strength dressed up as modernisation. The famed Polish poet Czesław Milosz saw in their work both dadaism and surrealism, while others commented that Skamander’s writings reflected the spoken word.

What must not be forgotten is that the Polish language itself had suddenly achieved prominence in 1918, after years of suppression and repression, so inevitably all writers would approach Polish initially in an ungainly or indecisive or manipulative fashion. Skamander’s ‘wolna estrada’ was literal: they did not mean to cause a storm in the literary world, but simply to open art up to a new independent world. This is why, when war loomed again in the 1930s, the Skamander group split and fell apart: there was no longer room for this naïve, unencumbered view of the country and its people. Their words and hopes and dreams, so diverse and resplendent with promise, no longer made sense. The present was shattered, and Skamander with it.

Juliette Bretan studies English Literature at the University of Cambridge and also works as a freelance journalist, specialising in Polish current affairs and culture.