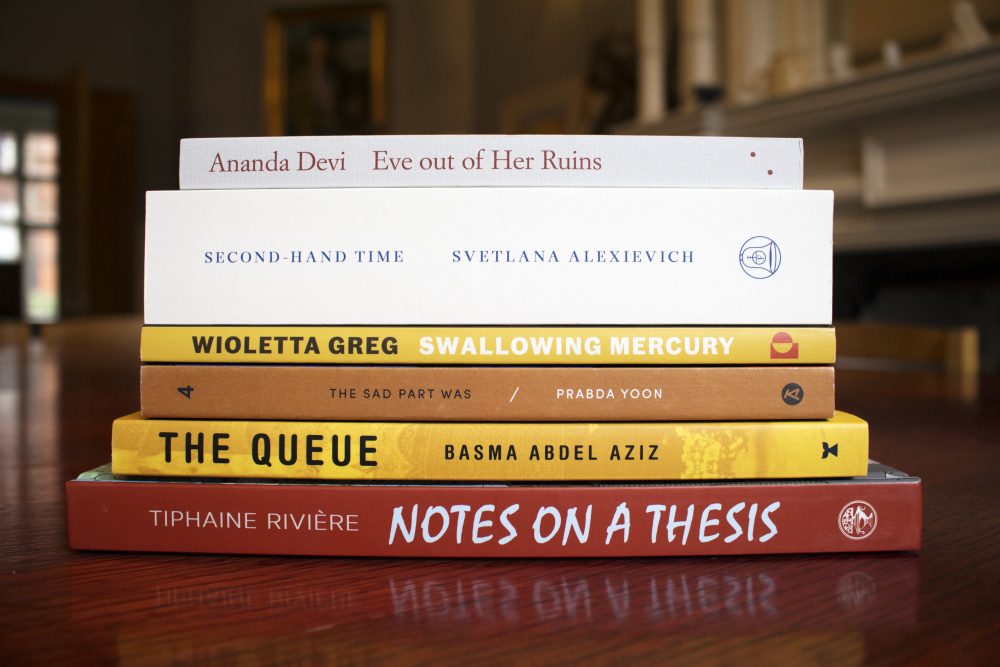 The judges of the inaugural TA First Translation Prize have announced a shortlist of six books by new literary translators. Among the shortlisted books are a graphic novel, four works of fiction and one non-fiction book, in translations from Arabic, French, Polish, Russian and Thai.

The TA First Translation Prize was founded in 2017 by Daniel Hahn with his share of the winnings from the International Dublin Literary Award. The aim of the prize is to recognise new talent in the translation profession – an arena which Hahn said at the time ‘remains a difficult one for newcomers to break into’. It is also designed to reward editors who take a chance on a debut translator and then work with them to make them better.

The winning work will be announced at the Society of Authors’ Translation Prizes ceremony at The British Library on 1 March, with the prize fund of £2,000 to be shared equally between the translator and their editor(s).

The Prize is judged this year by Rosalind Harvey, Bill Swainson and Daniel Hahn, and has been generously supported by The British Council.

The TA First Translation Prize was established as a celebration of new talent, of new voices, skill and risk-taking. A celebration of those people who want to expand what readers can read, by looking outwards – at a time when our culture (political and otherwise) seems fixated on doing the opposite. But would we receive enough high-quality, varied, eligible work? Well, if the books submitted tell us anything about the direction of translated literature in the UK today, it’s good news. We received over twenty books (each of them, remember, the work of an entirely new translator entering the ranks of the profession), and when we came to our shortlisting meeting, we identified no fewer than fifteen of them as really plausible candidates for the prize. It’s no wonder we have a shortlist we’re so proud of.

Our six-book shortlist contains fiction, non-fiction and a graphic novel. It represents work from five languages and six countries, brought to us by six (very different) publishers. Five of the six shortlisted translators are women. More pleasingly still, five of the six original writers are women, too – dramatically bucking the prevailing trend! But perhaps we shouldn’t be surprised at how much this list differs from the picture we’ve grown used to seeing: many of the writers are themselves making their English debuts with these books, confirming a suspicion that new translators are most often also vehicles for the new writers, and so are truly at the vanguard of literary change. How thrilling to be able to celebrate that today.

The shortlisted books are:

Eve Out of Her Ruins by Ananda Devi, translated from the French by Jeffrey Zuckerman, edited by Cécile Menon and Angeline Rothermundt (Les Fugitives)

The judges said: Jeffrey Zuckerman’s translation is a beautiful thing, undeniably powerful but also sensitive and precise. For me it really is the particular texture of its voices that make this book, that give it its impact – distressing, damaging, hopeless, violent, but, yes, so incredibly beautiful. As with so many of the books on the shortlist, it was hard to believe this is a debut piece of work!

Notes on a Thesis by Tiphaine Rivière, translated from the French by Francesca Barrie, edited by Clare Bullock (Jonathan Cape)

The judges said: We were all drawn to this hilariously (worryingly?) accurate depiction of the joys, frustrations and at times absurdities of academic life: the skill it takes to translate a graphic novel, delicately weighing both words – and words from not one but many different characters, all of whom here are distinct – and pictures, is undeniable, and Francesca Barrie’s rendering of Tiphane Rivière’s depiction of an obsessive, procrastinating doctoral student is spot on.

The judges said: Bela Shayevich’s translation is a work of extraordinary, sustained virtuosity, meeting the challenges of this huge polyvocal text energetically and fearlessly. Alexievich in English combines individual vivid human voices – truthful, sometimes surprisingly simple – into a thing of vast complexity and power. And Bela Shayevich, like Alexievich herself, deploys such great skill and sensitivity to ensure that all these voices are properly heard.

The judges said: Eliza Marciniak has skilfully recreated the powerful voice that leads us through this small yet perfectly formed novel. Greg’s brisk, earthy prose has echoes for me of the narrator of Claire-Louise Bennett’s Pond, and the shifts from highly sensual, cinematic depictions of rural Poland, heady with Catholics rites and wayward farm animals, to the dreamlike episodes of fainting, visions and nightmares of its young protagonist, have been neatly and elegantly dealt with. A memorable gem.

The Sad Part Was by Prabda Yoon, translated from the Thai by Mui Poopoksakul, edited by Deborah Smith (Tilted Axis Press)

The judges said: These twelve stories of life in urban Bangkok, most of them originally published in 2000, are inventive, experimental, playful and ironical, but they also have traditional virtues and carry an undercurrent of melancholy as they explore the displacement and disorientation of life in a rapidly changing society. Prabda Yoon is lucky to have a Mui Poopoksakul as his translator – his contemporary, she knows the world of his stories, and has found a voice that allows them to speak confidently and intelligently in English.

The judges said: The Queue is a slow but powerful burn of a novel. It is set in an unnamed country after the ‘disgraceful events’, as the authorities – known as the Gate – have euphemistically dubbed the Arab spring. It tells the very different stories of a number of characters who queue endlessly, waiting for the Gate to open and grant their various wishes. Queuing seems to be the only way to solve one’s problems in a country that has almost ground to a standstill, yet queuing is also an act of faith in this Kafka-esque world in which nothing can be called by its real name. Elisabeth Jaquette’s translation steadily allows the pressure to build.’