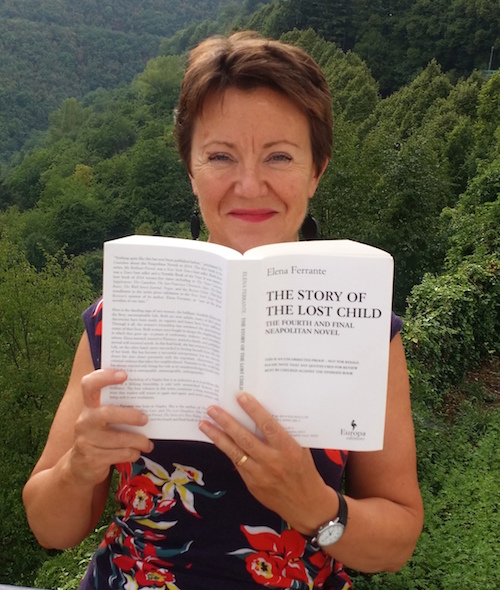 #RivetingReviews: Rosie Goldsmith reviews THE STORY OF THE LOST CHILD by Elena Ferrante

THE STORY OF THE LOST CHILD I believe that we will still be talking about ‘Elena Ferrante’ in decades to come – in the same way we still discuss Balzac or Dickens; in the same way that Karl Ove Knausgaard and Hilary Mantel are today part of our literary furniture. Elena Ferrante is a ground-breaking writer. She uses a pseudonym and we may never know her real identity, or gender, but we will always have her brilliant books. And how could she not be a woman? To write with such urgent, forensic, visceral intimacy about the minds, lives and bodies of women; to describe women with such raw honesty testifies to her female gender – and to her sensational achievement as a writer. Added to this she is Italian. Sitting here in Italy, her country and my second home, writing this review of a novel about two Italian women set in Italy, I can only express gratitude to Ferrante for helping me to better understand this magnificent but mercurial land. At times I felt so unsettled by her insights that I had to put the novel down.

The Story of the Lost Child is the fourth and final novel in the Neapolitan series. The first, My Brilliant Friend, was published in English in 2011; all four translated faultlessly, fluently and fabulously by Ann Goldstein. You must read all four for the full story: the first novel begins in the present day with Lila’s disappearance aged 66; the final novel ends ‘today’ with the mystery possibly solved. So, why not just write one novel? They are indeed very long, sometimes flabby, rambling and melodramatic but each word rings true, each page turns swiftly and the prose is often so luminous and lyrical that I wouldn’t miss a word. And would you really want to buy a 2000 page novel, or deprive Ferrante of the nail-biting cliff-hangers concluding each novel?

The four novels together cover six decades of the turbulent lives, loves and friendship of Lila Cerrullo and Lenu (Elena) Greco, both born into poverty in the 1950s in Naples (also Ferrante’s birthplace). Their friendship is fraught, competitive and occasionally rewarding. It is also obsessive, destructive and strangely joyless but they need each other like addicts. They get married, have children, jobs, confront loss, old age and death – all time-old stories but thanks to the heart-stoppingly honest autobiographical form – narrated by Lenu – the ordinary is quite extraordinary. The canvas is vast. We travel across Italy – but always return to Naples; across the decades; across the political and social upheavals of a country always on the edge, and we meet Italians of all ages, classes, professions and personalities, in bed, at parties, in school, in the office – but always return to the core Lila/Lenu relationship. However, the genius of these novels is that they are about all of us, our Comedie Humaine.

“In what disorder we lived, how many fragments of ourselves were scattered, as if to live were to explode into splinters.”

Ferrante the feminist shakes us up, scatters and shatters our lives and beliefs as women and forces us into self-examination – as few writers dare to do. With so many of us barely coping with the pressures of our lives, ask yourself before reading these novels, how strong are you? Do you need to feel more torment? More guilt, because of the choices you have made? The result though is more than cathartic: Ferrante is suggesting that we might all subject ourselves to this scrutiny in order to lead honest lives. “I felt that I had been invented by men, colonized by their imagination”. The rage and ferocious integrity of this novel are thanks to Ferrante’s head-on exploration of feminism, motherhood, love and friendship. Some critics protest that she only toys with feminism. But these are novels not feminist tracts. And her writing about men is equally scalpel-like. Both genders emerge flawed and naked under her sharp gaze. There are few happy moments, few likeable characters – which is often hard on the reader. I longed for Lila or Lenu to just buy a new dress and have some fun.

With the first words of ‘Ferrante 4’/The Story of the Lost Child we are plunged straight in – “From October 1976-1979 when I returned to Naples…” – as though the narrator Lenu is simply continuing a diary entry from ‘Ferrante 3’. Lenu is now 32, a wife and mother, divorced from Pietro and with Nino, her life-long love. She feels free “from the chains I had accumulated over the years – those of my origins, those I had acquired through academic success, those derived from the choices I had made in life, especially marriage.” She experiences “that painful effort of excavation” and “the pleasure of extending myself” as she loves passionately, writes novels and articles, finds fame, becomes politically active, travels, learns languages and public speaking.

But the novel bristles with rage, hurt and pain as the lava-like friendship and feud with Lila ebbs and flows: “Now that I’m close to the most painful part of our story, I want to seek on the page a balance between me and her that in life I couldn’t find even between myself and me.” “As usual,” Lenu says of Lila, “she was taking on the job of sticking a pin in my heart not to stop it but to make it beat harder.”

The indissoluble union between Lila and Lenu is reignited when Lenu returns with her daughters to Naples after her divorce, to her origins, her battle-axe mother, her sister, old friends – and to Lila. They both become pregnant again at the same time and enjoy a certain peace and harmony. But their differences are stark. Lenu is worldy, constant and hard-working, consciously striving for meaning in her life and writing – to improve herself, to escape her origins, her poverty, her class. And all the time she doubts that what she has achieved matters. Lila though is self-assured, tough and devoted to Naples and her neighbourhood, which she never leaves. She is also volatile, unstable and straight-talking, asking Lenu: why should life have meaning? Meaning is an illusion, “of being engaged”. Lila had often threatened to disappear, as bouts of mental illness “blurred her boundaries” and all four novels become an attempt by Elena Greco/Elena Ferrante to give meaning to Lila’s life after her final disappearance.

Ferrante’s astute political analysis of Italy’s many political and economic earthquakes from the 1950s to the present gives her novels a weight and significance beyond fiction. In The Lost Child the characters live through the kidnapping of Aldo Moro, the Red Brigades, the Camorra and a real earthquake – in Naples in 1980. This novel is suffused with frenetic activity and twists and turns, but one event is so seismic that it changes the lives of the two women for ever: the loss of a child. Part One of this fourth novel just ends there: Lenu comments that to recount such grief is almost impossible.

Part Two is entitled ‘Old Age’ and begins with a marvellous description of Naples in 1995. After the earthquake, Ferrante describes Naples as experiencing the ‘”gimmick of rebirth” and the superficial “powder of modernity”. The new Naples is all veneer, as are their own lives: “The couple collapses, the family collapses, every cultural cage collapses, every possible social-democratic accommodation collapses, and meanwhile everything tries violently to assume another form that up to now was unthinkable.”

The novel spirals to a conclusion after the loss of the child and our knowledge from ‘Ferrante 1’ that Lila will disappear. Lenu and Lila are both in their 60s. Lenu – aka Elena Greco – is now a famous author (!) but like an addict she always needs Lila and Naples for her stories, for their authenticity. Lila herself then begins to immerse herself in the history of Naples. This whips up Lenu’s excruciating insecurity about her own talent – and her suspicion that Lila is in fact the genuinely gifted one. Lenu imagines that Lila is herself writing a book about Naples, that it will be a masterpiece and will obliterate all that Lenu has ever written. In this final novel the city of Naples, and its contradictions, is both a protagonist and a metaphor: “a permanent stream of splendours and miseries, a cyclical Naples where everything was marvellous and everything became grey and irrational and everything sparkled again”.

Lenu decides to write a novel about their friendship. It’s a naïve attempt to please Lila, to reunite them. The novel is wildy successful but it is another blow for Lila. She cuts Lenu off and disappears.