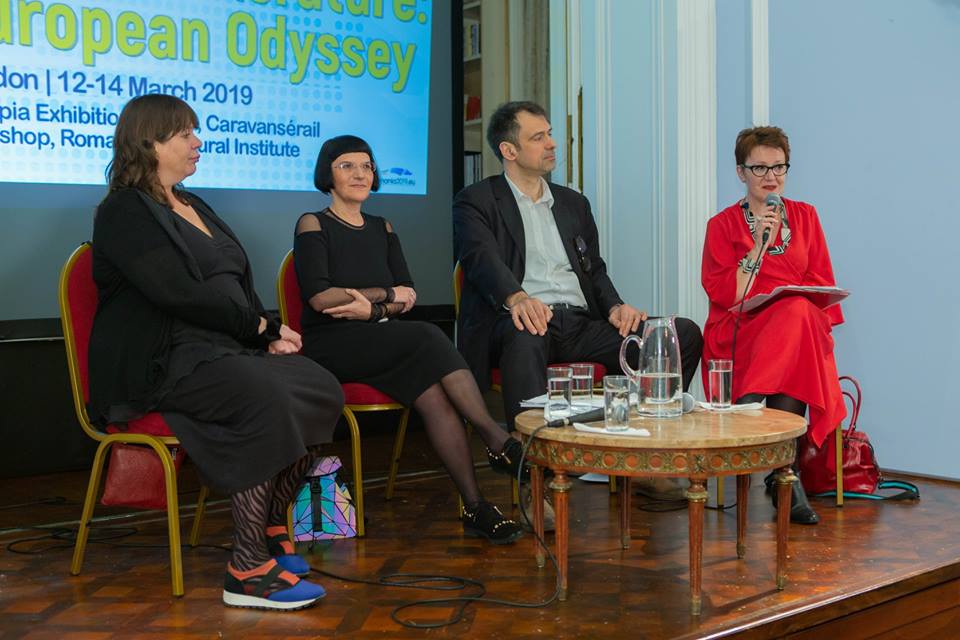 The first day of the London Book Fair gives the impression of a stage being set: actors of varying sizes and shapes, still not entirely sure of the roles they’re about to play, float around like moths carrying business cards under the artificial lights that ignite Olympia London, a venue that resembles an enormous cattle market. Yet if you follow the programmes on offer from the many and  various country stands, you’ll find that the party will often start in fact after the Book Fair closes for the day, with organizations holding events, recitals and evenings for literature lovers across London. One such example was the event held by and at the Romanian Cultural Institute in London – Romanian Literature: A European Topos. The ‘European’ element refers to the guests of honour, novelists Ioana Pârvulescu and Claudiu Florian, winners of the EUPL Prize, and featured the writer and critic Lucy Popescu, whose father was Romanian. The discussion was moderated by Rosie Goldsmith.

In a previous post introducing the event, we predicted that the quartet would ‘reflect on writing in a New Europe and the borderless imagination’. While both notions were weighed, the latter made for particularly thought-provoking remarks. For instance, what Pârvulescu called her ‘fictional childhood’, or the subject of her latest novel, Inocenții (Humanitas, 2016), Florian paralleled by remarking that writing through the eyes of a child offers an outlet for expression without the ‘negative energy’ that a more burdened protagonist or narrator might possess. There seems to be truth in this assessment if we consider that Pârvulescu’s book was described as ‘the book that everyone in Romania has read’. Florian’s The Ages of the Game. Citadel Street (Transit, 2008; Cartea Românească 2012), too, continues to be warmly praised several years after its publications in German and Romanian, capturing the optimistic spirit that characterized childhood in the 1970s – a sentiment that was probably shared by many people of this generation beyond Romania. Another trope present in both writers’ work is their shared cosmopolitan upbringing in the same ethnically diverse region of Romania, Brasov in Transylvania: Pârvulescu writes of an Esperanto-speaking grandmother, Florian of a Saxon mother. This might account for the shared translation capacities of each author: Florian translated his own novel into Romanian from German, Ioana Pârvulescu has translated Rainer Maria Rilke, Antoine de Saint-Éxupery, and, in an upcoming volume, A.E. Milne.

Both the terms ‘New Europe’ and ‘the borderless imagination’ carry utopian elements within them, yet with a recent history as entangled as modern Romania’s, the country’s literature can only be complicated and nuanced. There is a sense of an undertone of crisis, naturally reflective of our political and psychological scene today, in both texts, as described by both authors. Pârvulescu nods to Cioran, condemning history as ‘a monster’, unwilling to compromise either with the autobiographical truths in her novel or what she suggests the future may hold. Florian muses, in turn, on the desire for grasping recuperation that characterized authorship immediately after the 1989 Revolution. The contemporary European, borderless imagination, then, seems not to feel the need to delineate between memory and new beginnings.

We look forward to the inevitable translation of these two novels into English.