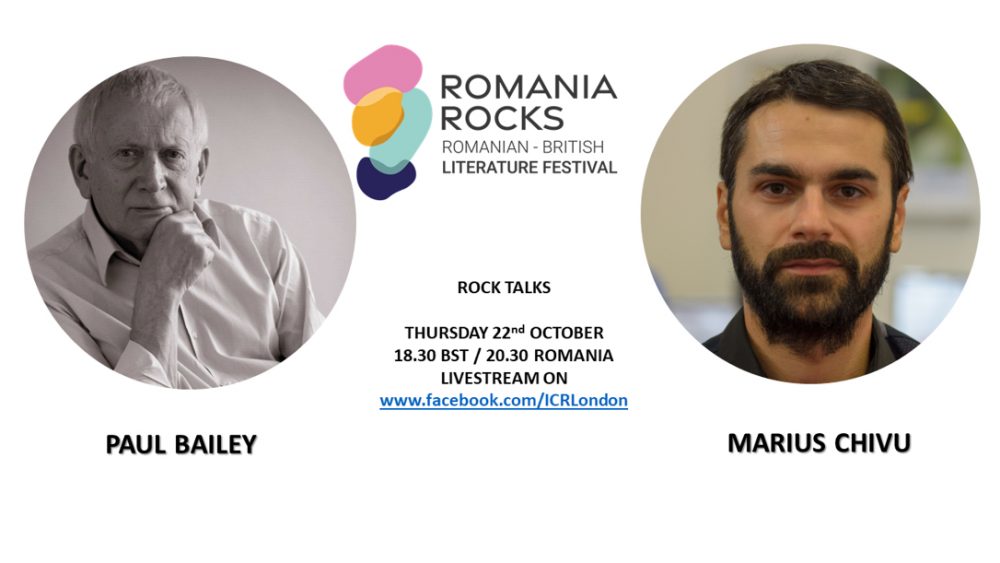 In this “Rock Talk”, British novelist Paul Bailey, noted for his memorable portrayals of Romanian history and characters in three of his novels, was joined by Marius Chivu, his Romanian translator, himself an author of travel memoirs, poetry and short stories. Chivu noted: ‘Translation is something I do as a part of writing. I wanted to learn more about Paul so I translated his books’.  The two authors became friends twenty years ago at a literary festival when Paul fell ill and was helped by Marius. They then went on to collaborate in their writing – Marius translates Paul’s novels and poetry into Romanian. During the pandemic they have been in constant touch, both of them writing copious amounts of poetry.

In this fascinating event they discussed Romanian literature past and present, the pros and cons of the idea of a country having a ‘National Poet’ (Mihai Eminescu in Romania’s case), with Paul praising the greater access to poetry a national poet gives a larger public, and with Marius countering this by saying that such a fixation might be detrimental to living poets.

The 1989 Romanian Revolution and its aftermath was also a topic for them both. Bailey described his trip to Romania in 1989: ‘It was one of the most unforgettable weeks of my life – it changed my approach to writing’. Moderator Rosie Goldsmith, too, added: ‘I also went to Romania at that time when I worked at the BBC and felt for the Romanians’ trauma – it has meant a lifetime fascination with the country’. Marius Chivu referred to the period after the Revolution in the 1990s as a ‘golden age for Romanian publishing’, an explosion of the written word which recovered many long-forbidden, exiled and classic authors. I found this point raised by Chivu particularly interesting to consider given our current life changing situation: will the publishing industry similarly experience a boom after the pandemic is over?

Paul and Marius also spoke of Romanian poetry in translation and the influence of Romanian author Mihail Sebastian on Paul’s prose. I enjoyed the feeling of being a fly on the wall created by the virtual context: the ease with which the conversation was carried on suggested that there might be, in a certain sense, more intimacy on Zoom than there is before a physical audience.

If you watch the video you can hear more about their remarkable friendship and working collaborations, and hear Paul Bailey’s delightful recitation of a Romanian poem in the original.