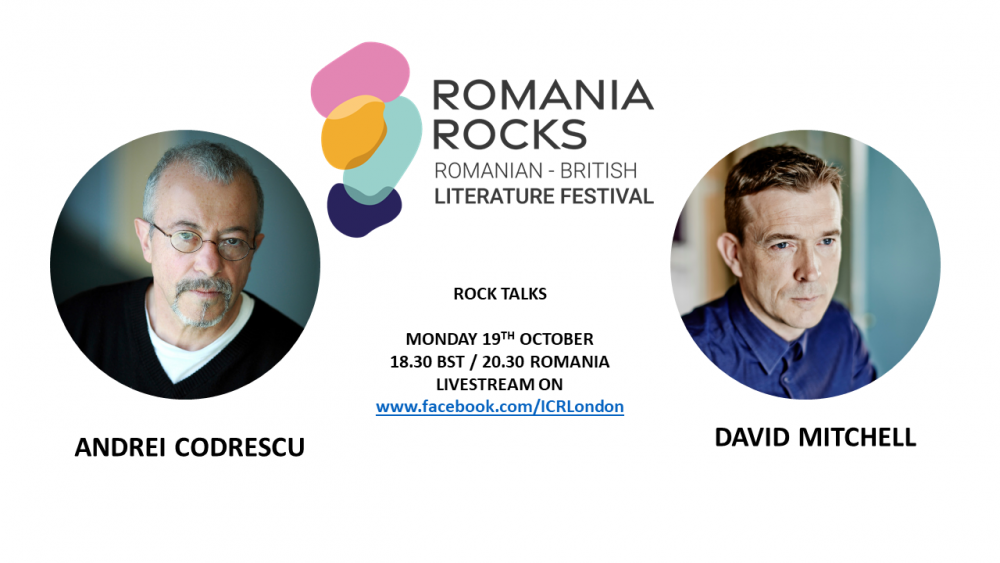 The acclaimed British author of novels such as Cloud Atlas and Utopia Avenue meets the great Romanian poet, novelist and essayist. Hosted by Rosie Goldsmith.

Andrei Codrescu was born in Sibiu, Romania, and emigrated to the United States in 1966, where he has lived ever since. Codrescu’s poetry explores themes of identity, exile, and transformation with bold irreverence. He is the author of dozens of books of poetry, including Jealous Witness (Coffee House Press, 2008), It Was Today (Coffee House Press, 2003), and his debut, License to Carry a Gun (Carnegie-Mellon University Press,1970), which won the Big Table Poetry Award. He is also the recipient of the 2005 Ovidius Prize.

In 1983 Codrescu founded Exquisite Corpse: A Journal of Books & Ideas. He has edited several annual anthologies of work from the journal, as well as the anthologies American Poets Say Goodbye to the 20th Century (Thunder’s Mouth Press, 1996) and American Poetry Since 1970: Up Late (Four Walls Eight Windows, 1996). He collaborated with Ruxandra Cesereanu on The Forgiven Submarine (Black Widow Press, Boston 2009).

At home in multiple genres, Codrescu has also authored nonfiction, including the retelling Whatever Gets You through the Night: A Story of Scheherazade and the Arabian Entertainments (Princeton University Press, 2011); The Poetry Lesson (Princeton University Press, 2010), a teaching memoir; The Posthuman Dada Guide: Tzara & Lenin Play Chess (Princeton University Press, 2009); and the memoir The Hole in the Flag: A Romanian Exile’s Story of Return and Revolution (William Morrow, 1991). Codrescu wrote and starred in the 1993 documentary film Road Scholar, for which he won a Peabody Award as well as Best Documentary awards from the Seattle International Film Festival and the San Francisco International Film Festival. He can be heard regularly on National Public Radio’s program All Things Considered. His collection of poems, So Recently Rent a World, New and Selected Poems: 1968-2012 (Coffee House Press 2013) was long-listed in 2013 for the National Book Award.

Codrescu has taught at Johns Hopkins University, the University of Baltimore, and Louisiana State University, where he was the MacCurdy Distinguished Professor of English until his retirement in 2009.

David Mitchell is one of the best-known fiction writers in the world and translated into most major languages. He is the award-winning and bestselling author of Ghostwritten (Hodder & Stoughton, 1999), number9dream (Sceptre, 2001), Cloud Atlas (Sceptre, 2004), Black Swan Green (Random House, 2006), The Thousand Autumns of Jacob de Zoet (Sceptre, 2010), The Bone Clocks (Sceptre, 2014), Slade House (Sceptre, 2015), and this year Utopia Avenue (Sceptre, 2020). Twice shortlisted for the Man Booker Prize, Mitchell was named one of the 100 most influential people in the world by Time in 2007. With KA Yoshida, Mitchell translated from the Japanese the internationally bestselling memoir The Reason I Jump and its follow-up. He is noted for his activism in support of a better understanding of autism.

His novels are noted for their bold topics and timelines, their lyrical prose style and complex structure. He has been shortlisted for the Man Booker Prize twice and has won many awards around the world, including Granta’s Best of Young British Novelists and Time magazine’s 100 Most Influential People in The World. His novel Cloud Atlas was made into a major Hollywood film starring Tom Hanks. David Mitchell is also a renowned scriptwriter for film and TV, most recently for Matrix 4.