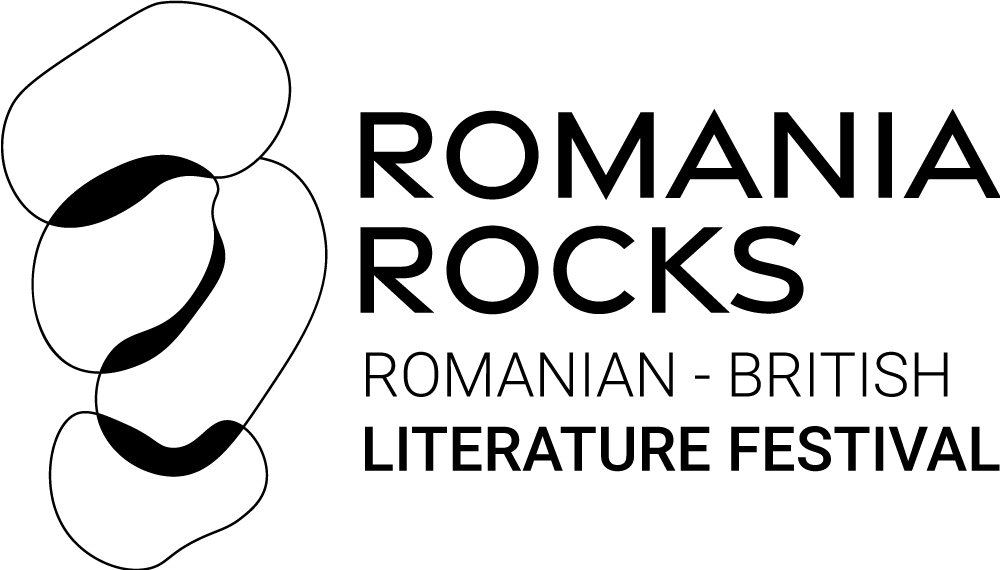 The full programme of Romania Rocks. Romanian-British Literature Festival has been announced.

The headline “Rock Talks” conversations bring together some of today’s greatest Romanian and British literary brains to discuss issues and ideas close to their hearts.

The acclaimed British author of novels such as Cloud Atlas and Utopia Avenue meets the great Romanian poet, novelist and essayist. Hosted by Rosie Goldsmith.

Both much admired for their broad cultural passions and intense, exquisite writing on the human condition. Hosted by Rosie Goldsmith.

Two wonderful women, both novelists and poets, both with a great sense of humour, meet and talk for the first time. Hosted by Rosie Goldsmith.

Find out what happens when two successful writers and public figures meet for the first time: Turkish-British novelist, academic and activist meets the French-Romanian novelist, playwright and poet. Hosted by Rosie Goldsmith.

Two internationally renowned translators meet to discuss their lives and work, and how they approach translating some of Romania’s most famous authors, such as Herta Müller and Mircea Cărtărescu. Hosted by Rosie Goldsmith.

LET THERE BE POETRY!

Five of Romania’s strongest poetic voices, Svetlana Cârstean, Claudiu Komartin, Radu Nițescu, Andra Rotaru and Radu Vancu, take us to the cities of Bucharest and Sibiu, in southern and central Romania, for an evening of boundless verse and never-before-seen landscapes.

(Supported by the British Centre for Literary Translation, UEA).

Organised in collaboration with Publishers Without Borders and led by the festival’s Artistic Director Rosie Goldsmith and publishing consultant Emma House, the event looks at the biggest challenges in publishing literature in translation today. With the participation of key publishers from Romania and Britain.

THE LANGUAGE OF THE ROMANIAN BLOUSE, 28 October, 3-5pm, online

Architect Ioana Corduneanu, founder of the ‘Sown Signs’ community, tells the story of Romania’s most emblematic piece of clothing – ‘IA’ (traditional blouse) – translating its language and deciphering the rich symbolism behind the embroideries. British authors are invited to respond with a collective poem.

THE DISTANCE BETWEEN ME AND ME (Distanţa dintre mine şi mine), directed by Mona Nicoară & Dana Bunescu

MOROMETE FAMILY. ON THE EDGE OF TIME (Moromeții 2), directed by Stere Gulea

Click here for the full programme and booking details.

Romanian and Moldovan authors who have made the UK their home and inspiration for many years – Ioana Baetica Morpurgo, Stela Brînzeanu, Vica Demici, Cristina Mureșan, Simona Nastac, Andreea Scridon and Anda Vahnovan – meet to discuss and read from their most recent work. Hosted by Paula Erizanu.

What stories do the objects that we value tell, and how can we tell these stories in a meaningful way? Artist Marlene Stanciu will guide us in creating small personal museums by unveiling some fascinating objects that she and her partner, Alex Herberth, saved and brought back to life in their traditional house in the village of Cincu, Transylvania.

Axel Scheffler has illustrated some of the world’s most-loved children’s books and has created the one and only Gruffalo. Working on a text by Florin Bican, who craftily rewrites classical Romanian folktales, Axel will show us the  process behind creating an exceptional character.

Florin Bican is well-known for his jolly translations of the famous children’s books created by Julia Donaldson and Axel Scheffler, but also for his own brilliant, playful writing.

THE INCREDIBLE STORY OF DUMITRU DAN, THE FIRST MAN TO WALK AROUND THE WORLD, 24 October, 4pm, RCI London, register here

Introduction by Roger Bunyan, author of the book Against All Odds: The Stories of 25 Remarkable Adventurers

Talented sisters Maria and Ileana Surducan are passionate about illustrated storytelling, and they have created, together and individually, an impressive number of comics and graphic novels (published in Romanian, French and English). Their multi-disciplinary work often refers to traditional Romanian folktales, but in a modern and lively way.

Acclaimed writer Simona Antonescu is passionate about transforming history into literature, for adults and children alike. She’ll introduce us to Ilinca and Calin, the lucky twins who magically travel to forgotten places and meet remarkable characters from Romanian history. Through their eyes, we will (re)discover Decebal, Menumorut or Queen Maria and King Mihai, and we will choose our favourite hero from history.

THE INCREDIBLE STORY OF DUMITRU DAN, THE FIRST MAN TO WALK AROUND THE WORLD, 25 October, 4pm, online, register here

Introduction by Roger Bunyan, author of the book Against All Odds: The Stories of 25 Remarkable Adventurers

With a career spanning 12 years, Publika have earned general acclaim on the Romanian pop-rock scene. Having recently released Fallen, their catchiest single ever, the popular trio and their guests are ready to take the world by storm in the closing event of the festival.

The festival is supported by dedicated independent bookshops selling the books of all our authors:

The European Bookshop: Click here for books in English

All events are free, filmed by London Video Stories and will be available subsequently on Facebook, YouTube and the RCI London & European Literature Network websites.

*ROMANIA ROCKS: This unique literary festival takes its name from Romania’s world-famous living, moving, growing rocks, the stunning geographical phenomenon known as “Trovants”. Hence our distinctive “rocks logo”. Romania’s rocks are also a superb metaphor for its vibrant and original literature and for a festival that aims to address some of the “cornerstone issues” of the day with our Romanian and British authors, from the environment to culture, health to technology, and of course, the transformative power of storytelling. Can literature make sense of today’s traumas and challenges and illuminate our lives?