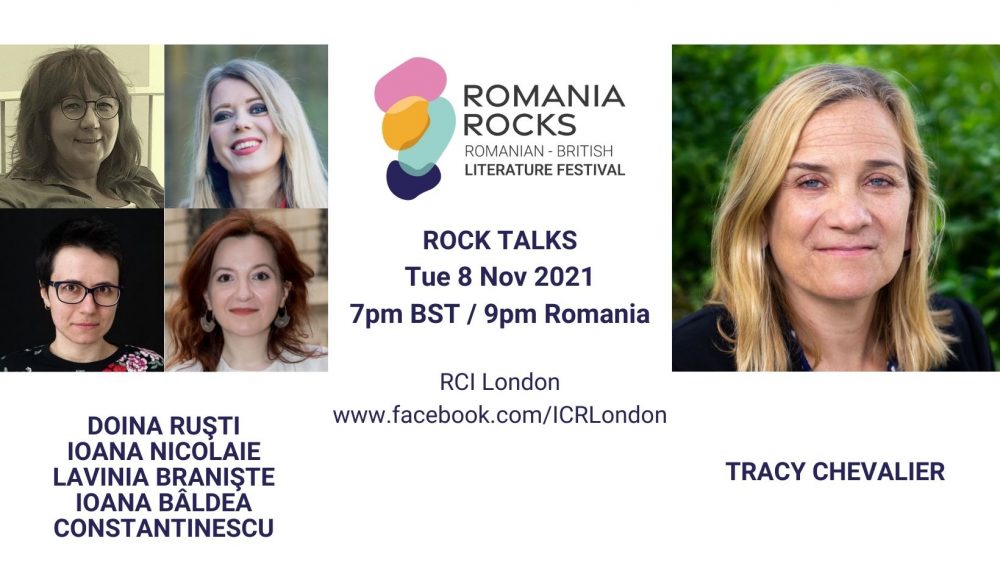 The final ROCK TALK event, and the end of the festival, is dedicated to the writing, readings and conversation of five wonderful “rock star” women novelists and poets from both Romania and Britain. A joyful celebration of female creativity. Hosted by Rosie Goldsmith.

Tracy Chevalier is the American-British author of 10 novels, including the international bestseller Girl with a Pearl Earring (1999), based on the painting by Vermeer, which was also made into a successful film, and most recently her novel A Single Thread. Tracy grew up in Washington DC and moved to the UK in the 1980s. Known for her meticulous historical research and love of art, Tracy’s novels are loved across the world for bringing history, women and art to life. She is a Trustee of the British Library and the Dorset Museum, and a Patron of several charities and literary organisations.

Doina Ruști is an outstanding and prolific Romanian writer, author of (amongst others) the Phanariot trilogy, composed of the novels Homeric (2019), Mâța Vinerii (2017) and Manuscrisul fanariot (2015), preceded by two other successful novels, with a strong social message: Fantoma din moara (2008) and Lizoanca (2009). She commissions and edits the Contemporary Prose section of the LITERA Publishing House, Bucharest and is a highly respected publisher. Her own writing has won praise internationally, being printed in literary magazines from Spain to Italy to China.

Ioana Nicolaie is the author of several volumes of poetry (Retouched Photo, The North, The Faith, Cenotaph, Autoimmune), an anthology (Lomographies) and three novels (The Sky Inside the Belly, A Bird on the Wire, The Black Wormwood – winning and being nominated for most major prose prizes in Romania. She has also written several children’s books (Arik’s Adventures, Arik and the Mercenaries, Ferbonia, Vertigia and Medilo’s Journey). Her works have been widely translated and nominated for several international prizes. She has featured in twenty anthologies of Romanian writing (Windows 98, 40238 Tescani, The Book of Grandparents, Intellectuals in the Kitchen, The Book of Senses, My Bucharest, Writers at the Police, etc.) and in several foreign literary magazines and anthologies (Poésie 2003: Roumanie, territoire d’Orphée, New European Poets, An Anthology of Contemporary Romanian Poetry etc.). She appears at literature festivals all over the world. She is a member of the Romanian Writers’ Union and of PEN Romania. Her latest novel is Tot înainte (Humanitas, 2021).

Lavinia Braniște was born in 1983, in Brăila. She studied foreign languages ​​in Cluj-Napoca and Bucharest (MA in Translation of the Literary Text). Lavinia worked as a language teacher and translator and has translated over forty books from English, French and Spanish, most of them for children. She has published three prize-winning novels: Interior Zero (Polirom, 2016), adapted for the stage in both Romania and Germany; Sonia ridică mâna (Sonia raises her hand; Polirom, 2019), and Mă găsești când vrei (Find me whenever you want; Polirom, October 2021).
Lavinia’ s children’s literature include four ‘chapter books’ in the Rostogol series, illustrated by Andrei Măceșanu (Arthur Publishing House) and several picture books. The fourth volume of the Rostogol series, Rostogol iluzionist (Rostogol Illusionist), is being adapted for the stage at the Gong Theater in Sibiu. Lavinia lives in her hometown, Brăila, and dedicates herself to writing.

Ioana Bâldea Constantinescu graduated from the Faculty of Foreign Languages and Literatures of the University of Bucharest, specializing in English-Spanish, and has a master’s degree in American Cultural Studies at the same faculty. She worked for 19 years as a radio journalist and interviewed many of the world’s greatest living writers, from Jonathan Safran Foer, David Mitchell, Evgheni Vodolazkin, Jón Kalman Stefánsson, to Isabel Allende and Bernardine Evaristo, and many others. She has collaborated with Esquire, The One, ELLE and Forbes Life, and since 2020 she writes regularly for Harper’s Bazaar.

In March 2015, she published the prose volume Beyond Oranges at Humanitas Publishing House, and in 2017, the novel Nautilus, followed, in 2019, by Poveste pentru Maria, at Nemira Publishing House, a volume nominated for the Romanian Writers’ Union Awards. She has also published short prose and essays. Since October 2020, she has been the Brand Manager of Corint Publishing House. In the same year she launched ioanabaldea.com, an online cultural platform of meetings, interviews, reflections and ideas.