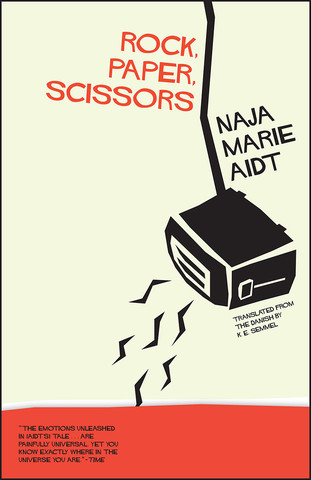 “The emotions unleashed in this tale . . . are painfully universal. Yet you know exactly where in the universe you are. This is the hallmark of great short stories, from Chekhov’s portraits of discontented Russians to Joyce’s struggling Dubliners.”
—Time

Naja Marie Aidt’s long-awaited first novel is a breathtaking page-turner and complex portrait of a man whose life slowly devolves into one of violence and jealousy.

‘Rock, Paper, Scissors’ opens shortly after the death of Thomas and Jenny’s criminal father. While trying to fix a toaster that he left behind, Thomas discovers a secret, setting into motion a series of events leading to the dissolution of his life, and plunging him into a dark, shadowy underworld of violence and betrayal.

A gripping story written with a poet’s sensibility and attention to language, Rock, Paper, Scissors showcases all of Aidt’s gifts and will greatly expand the readership for one of Denmark’s most decorated and beloved writers. (Read an Excerpt)

Translated from the Danish by K. E. Semmel

Naja Marie Aidt was born in Greenland and raised in Copenhagen. She is the author of ten collections of poetry and three short story collections, including Baboon (Two Lines Press), which received the Nordic Council’s Literature Prize and the Danish Critics Prize for Literature. Her books have been translated into nine languages. Rock, Paper, Scissors is her first novel.

Naja Marie Aidt was one of six writers invited to take part in this year’s European Literature Night at the British Library.