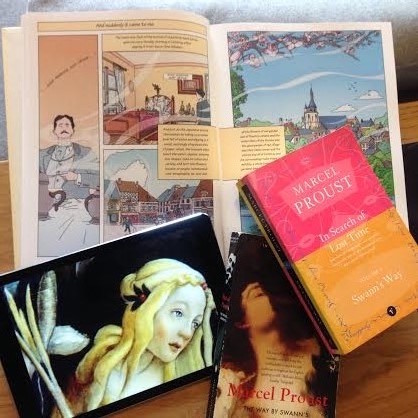 Swann’s Way is the first book in Marcel Proust’s seven-volume novel. In his introduction to this comic-strip version, the translator Arthur Goldhammer welcomes “the reader new to Proust”. Taking his lead from Michael Wood’s London Review of Books review of the original French edition – in which the critic imagines the typical reader as someone “who had always dreamed of reading Proust” but found the task too daunting – here Goldhammer describes Stephanie Heuet’s adaptation as a “gentle introduction” to Proust. He goes on to liken it to a “piano reduction of an orchestral score”. With his translation, he says that he hopes he has “packed enough to make your journey comfortable and [hasn’t] left out anything necessary to your enjoyment”.

There is more than a whiff of considered defence here. As we also learn from Wood’s LRB review, when Heuet’s graphic novel first appeared in French there were attempts not so much to shoot it down in flames, but to incinerate the work mid-flight. Therefore trying to predict where the blows from English-speaking critics might fall, Goldhammer attempts to parry: some “favourite passages” might be absent, he writes; some “fine images” dispensed with; the pacing not the same as the original. Finally he raises a sturdy shield: “this book is not Swann’s Way as Proust wrote it”.

Although not a Proust expert, I have read several volumes of Á la Récherche Du Temps Perdu. I have read Swann’s Way twice before – once in C.K. Scott Moncrieff’s ‘classic’ English translation, and then in Lydia Davis’s 2002 version, The Way by Swann’s. So reading Heuet’s and Goldhammer’s graphic-novel adaptation is the third time I have visited Combray, the third time I have tasted the ‘fragrance’ of the tea-soaked madeleine, the third time I have followed Swann in his dash round Paris after his idealised, idolised Odette and the third time I appreciated the full import of that extended anecdote for the narrator’s worldview.

In order to judge the graphic novel according to Goldhammer’s prerequisites – as a gentle starter for readers intimidated by the full seven volumes – I had to make an active attempt to turn down the volume on that part of my mind that recalled various scenes and passages from the original prose novel. As far as I managed to do this, this graphic novel is a success.

The book is drawn in the classic French-Belgian comic-book ‘bandes dessinées’ style. This is an almost hyper-realistic approach to comic artwork, and is characterised by precise line-drawing, a muted colour palette, few-to-no shadows, and a lack of the dynamic speed lines and distortions that generate the sense of movement in much American comic-book art.

This style is a perfect way to render the world of the belle époque in which Swann’s Way is set. The Paris of the era is illustrated with impressive architectural accuracy. Similarly, it is clear that Heuet has done her fashion homework. Her characters are dressed in a range of beautifully detailed and, to my eyes at least, historically correct costumes. This is of particular importance at the very end of Swann’s Way, when the narrator decries the ‘modern’ mode for large hats and hobbling dresses.

There is, however, a paradox in this style when applied to Proust. Every window mullion and every flower on Odette’s tea-drinking kimono are depicted and for me this apparently complex style reduces the work to a simple story. Perhaps this is the intention. As Goldhammer says, “the confining frames of the a graphic novel … [shed] a revealing light on the book’s armature, on the columns, pillars and arches that support the narrator’s resurrected memories”. And there is no denying that this is a very appealing story, set in a very appealing place. However, just as the bandes dessinées style dispenses with shadows and favours precision of line over impression, so it fails to convey the themes of memory’s modifying powers, and of the relationships between words and forms that are so intrinsic to Proust’s original.

There are significant attempts to convey the big ideas that Proust wrestles with in his work; but in an admission, perhaps, that the graphic novel is not the right vehicle for this, the images are accompanied by swathes of text. In an original graphic novel, not an adaptation like this one, words and art attempt to reflect and feed into each other, but here the text boxes provide tastes of the original prose, which the images illustrate but don’t expand on. And sometimes, in cases where direct speech is involved, a text box introduces a conversation that is then continued in speech bubbles. The overall effect is dissonant; text and images feel dislocated from each other.

A reader like me, then, well acquainted with Proust, cannot help but fill the gaps left by this dislocation with – oh what irony! – my memories of previous readings of Swann’s Way. And the irony is particularly heavy. Because my memories act in ways similar to Swann’s identification of Odette with Botticelli’s painting of Zipporah in a Sistine Chapel fresco; or to the way the narrator generates a vision of a mauve house in Parma just from the city’s name. The graphic novel in my hands refers to the great work I have experienced. I invest the panels and text with the sophistication I draw from my previous readings of one of the most remarkable feats of Western literature. In itself, the graphic novel doesn’t provide the same subtlety, nuance or power. And perhaps that is because In Search of Lost Time is a work not of illustration but of literature, of the word, of names and naming.

For me then, Heuet’s effort is doomed to fail. And the most revealing way it does this is in the image of Odette, which is so central to Swann’s Way. In the very act of drawing her – not describing her in words – Heuet loses a key dynamic of Proust’s novel. By having Swann identify Odette with Botticelli’s Zipporah, Proust exemplifies the difference between the mental image we have of a person (or place or thing) and the reality of that person’s actual appearance and being. He describes – almost for the first time in literature – the processes by which humans marry information provided by their senses with information generated by their minds – by their memories and their thoughts. And, by articulating these processes with language, Proust enables the reader to replicate Swann’s own experience of them. His reader can view a reproduction of Botticelli’s Zipporah, or even visit the original in Rome, and conjure up their own, individual mental image of Odette, looking in some slight way like a Renaissance image of a biblical figure.

The Proust-acquainted reader of this graphic novel can’t help but miss that experience, which is perhaps the most impressive feature of the original. Readers “new to Proust”, on the other hand, provided as they are with an image of Odette that Heuet has chosen, won’t necessarily miss that key experience. But, by its very ‘graphic’ nature, neither can Heuet’s adaptation introduce them to it.

Read this beautiful book, then, as an introduction to one of literature’s most sophisticated coming-of-age stories. Read it, perhaps, as a reminder – as a madeleine soaked in tea whose fragrance will transport you back to your previous readings of Proust.

Don’t expect, however, to experience any of what makes In Search of Lost Time possibly the most seminal work of twentieth-century literature.

In Search of Lost Time: Swann’s Way – A Graphic Novel

Adaptation and drawings by Stephanie Heuet