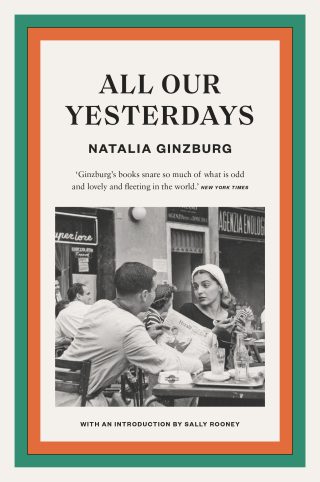 #RivetingReviews: West Camel reviews ALL OUR YESTERDAYS by Natalia Ginzburg

Having written an expansive feature covering recent Ginzburg rereleases for The Italian Riveter earlier this year, I expected in this review to be reflecting again on Ginzburg’s unique literary style – her brevity, the tension she creates between specific moments and generalised observations, and how she uses it in this, probably her longest book.

On completing All Our Yesterdays, however, I was prompted to offer quite a different response – both from the one I anticipated, and from my usual style of review. My starting point was Ginzburg’s title: All Our Yesterdays is a direct translation of her ‘Tutti I Nostri Ieri’. This is a novel about the rise of fascism and the Second World War as experienced by a bourgeois family and their wealthy friends and neighbours living in a small town in northern Italy. Having been scattered across the country, and Europe, by the upheaval of war, the final scene sees the survivors regather and reflect on the recent past – ‘thinking of all those who were dead, and of the long war and the sorrow and noise and confusion’. Ginzburg thus provides us with a simple explanation for the book’s title – these yesterdays belong to this group of friends. But simplicity in Ginzburg is deceiving. In 1952, when the book was first published, many Italian readers must have thought that ‘nostri’ included them. For Ginzburg’s cast draws in characters from across the social spectrum, from factory owners to police sergeants, from ladies’ companions to lowly servants, and from the aristocratic Marchesa to the Italian peasants, the contandini – all with both a collective and a personal experience of the war; Ginzburg, as always, creating a satisfying tension between the general and the specific.

Reading this book seventy years after it was written, however, I feel that ‘nostri’ also includes me – includes my family’s experience of the war. It’s easy to recognise on an intellectual level that this must have been Ginzburg’s intent – to remind every reader that the twentieth-century fascist debacle would be felt long into the future; but there was something more personal about this novel, a familiarity in terms of character and incident that had me respond in an emotional way.

In the 1920s while Ginzburg’s young people are burning illicit anti-fascist newspapers in their stove, my paternal grandfather (an active socialist) was ferrying union bosses to Downing Street for talks to end the general strike. When Germany invades Poland in 1939 and Britain and France declare war, our Italians are still convinced their country won’t enter the war on either side. Even so, Signora Maria, their housekeeper, goes ‘searching the town for sugar’. My maternal grandmother, on the other hand, heard on the wireless the news about general conscription and went looking for her fiancé, my grandfather, on the crossbar of her cousin’s bike – finally tracking him down to the recruitment office.

My grandfather ended up in India, in France, in Burma. But he told very few tales of his wartime experiences. It was almost a taboo subject in my grandparents’ house. Instead, discussions of the war circled around my grandmother’s experiences at home. And this is why All Our Yesterdays feels so familiar – for it records the experiences, not of the fighting, but of those who were left behind. The youngest member of the family, Anna, takes centre stage as war breaks out, having become pregnant out of wedlock at only sixteen, and subsequently marrying a much older family friend, Cenzo Rena. Earlier, when she watched her elder siblings and their friends become involved in the resistance to fascism, she found herself fantasising about revolution: she ‘pictured herself upon the barricades … firing off a rifle and singing.’ But now she has a child, and has been taken to wait out the war in Cenzo Rena’s home in a remote village. She returns to the north only to rescue Signora Maria, who she finds living quite happily with her accumulated possessions in a pensione in Turin. Signora Maria refuses to leave – and becomes one of the casualties of war. The pensione is bombed, and concerned to save a large quantity of towels, she doesn’t reach the air-raid shelter in time: ‘she had been swept away in the collapse of the staircase together with a large suitcase, in which were these towels.’ The landlady sends the towels ‘all scorched’ to Anna’s sister, Concettina, along with a letter informing her of Signora Maria’s demise.

I’m reminded of the story of the bombing of my grandmother’s house in Peckham, south London. Unlike the unfortunate Signora Maria, my grandmother, and her mother and father, did make it down to the air-raid shelter in time, but had no indication that they’d lost their home until they came out of the shelter the next morning – ‘you never hear the one that hits you’, was my grandmother’s refrain for the rest of her life. Half the house had collapsed. But in the other half, jam jars filled just the previous afternoon by my great-grandmother, and coins she’d piled in stacks for that week’s various bills, all remained intact.

Ginzburg’s experiences of the war, and the experiences of her characters, differ in a key way from my family’s, of course. My family were on the winning side. The war effort pursued in the armed forces by my maternal grandfather, and in the civil service by my paternal grandfather – a quaker, and therefore a ‘conchie’, or conscientious objector – and by both my grandmothers, who each had to sign the Official Secrets Act to perform their roles, was against a combination of an ideology and a group of nations in the form of the Axis powers. For Ginzburg and her characters, though, ideology and nationality are separate: the fascists do not represent Italy for them, and when the Germans sweep in they are treated like an invading force, not friendly partners. Indeed the English, when they finally arrive, remind the Italians of the Germans: ‘The contandini … stood spellbound looking at these soldiers dressed like the Germans in yellowish cloth with short trousers and blond, hairy knees.’ However, ‘the contandini were very pleased indeed with these new soldiers who did not kill them’.

My family didn’t experience invasion, despite living in fear of it for a good part of the war, and this represents another fundamental difference between them and Ginzburg’s characters. The final lines of the book see the survivors ‘thinking … of the long, difficult life which they saw in front of them now, full of all the things they did not know how to do’. The victors, on the other hand, were left, quite naturally, with a sense – for better or worse – that they very much did know how to take on the future. They’d won the war, after all.

Yet, despite this confidence and optimism, the ravages of the war remained with my grandparents their entire lives – and the impact was felt by their children and grandchildren. At my maternal grandparents’ ruby wedding in 1981, when I was eleven years old, my grandfather gave a speech in which he mentioned the people who could not be with us to celebrate. Among these were a series of names I didn’t recognise, and neither did any of those present. They were his dead war comrades. To this day I can’t be sure when or how they died – he refused to discuss it, just as he refused to take part in any form of remembrance ceremony. He remembered in his way, he insisted. This was his grief.

He was right, of course. We cannot presume to grieve for people we never met or knew, whose names we do not recognise. But we can acknowledge that these yesterdays – which Ginzburg fictionalised, but which were lived by families across Europe and the world – are all of ours, and reverberate today as we face a fresh wave of political and social turmoil.

West Camel is a writer, reviewer and editor. He edited Dalkey Archive’s Best European Fiction 2015, and is currently working for Orenda Books. He has written two novels, Attend and Fall. He is the editor of the Riveter magazine and the #RivetingReviews for the European Literature Network.n.

Read West Camel’s #RivetingReview of VOICES IN THE EVENING, FAMILY LEXICON, THE ROAD TO THE CITY, THE DRY HEART, THE LITTLE VIRTUES and HAPPINESS AS SUCH by Natalia Ginzburg

Read West Camel’s #RivetingReview of THE CONVERT by Stefan Hertmans

Read West Camel’s #RivetingReview of THE BITCH by Pilar Quintana

Read West Camel’s #RivetingReview of LUCKY PER by Henrik Pontoppidan

Read West Camel’s #RivetingReview of MY PARENTS: AN INTRODUCTION and THIS DOES NOT BELONG TO YOU by Aleksandar Hemon

Read West Camel’s #RivetingReview of THE HEART OF A STRANGER. AN ANTHOLOGY OF EXILE LITERATURE editedby André Naffis-Sahely