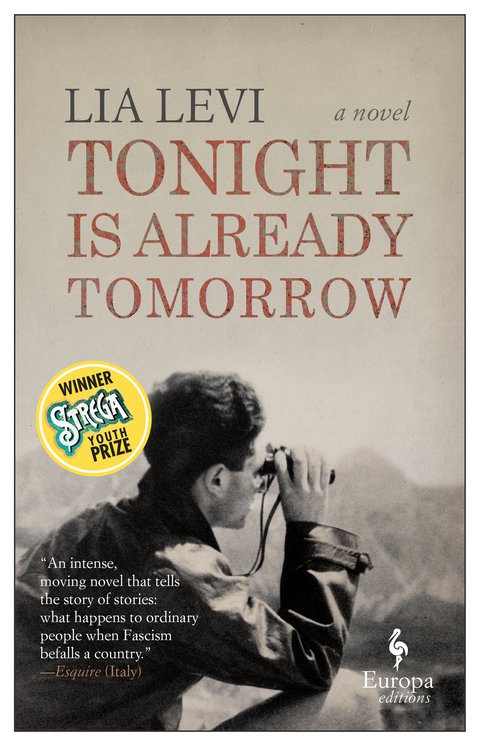 Tonight is Already Tomorrow immerses you in one of the darkest periods of Italian, and world, history. The novel owes its power to Lia Levi’s steadfast focus on the lives of an ordinary Jewish family: ‘The Rimons were nothing special. They were a good family, but they were not particularly observant; tepid at best.’

Their story is filtered mostly through the eyes of Alessandro, whom we first encounter in 1935 as a precocious eight-year-old. He and his parents, Marc and Emilia, surrounded by a cast of extended family and friends, move within a physical and social world meticulously conjured up by the author. When the fascist regime passes the infamous racial laws of 1938, most of the Rimons’ kin do not believe that measures against the Jews will be implemented or that they will apply to them, even when restrictions escalate. ‘“Discrimination isn’t the same as persecution,” pure propaganda would never become reality, it would be too difficult to put these laws into practice’, some of them say, while those who want to abandon Italy discover that other nations will not welcome them.

Early on, Alessandro’s cosmopolitan father, who holds a British passport, suggests emigrating to England with his wife and son. Young Alessandro ‘knew exactly what needed to be done. The Italian Jews had to leave. “We have to go, at least those of us who can,” he said’. But Emilia, resentful towards the boy, who has frustrated her desire for him to be a prodigy, opposes the idea. “‘England? I have no idea what it’s like. You always come up with these crackbrained ideas,’” she says to Marc. And so, they stay. By the time the horror of what is happening to Jews in Italy and elsewhere sinks in, the escape route to Britain has closed and the one still open – to Switzerland – is fraught with danger.

The narrative pace starts out leisurely, wrapping us in the ambience of the period and the everyday life of parents, children, relatives and friends in Genoa before 1938. It quickens steadily, mirroring the increasingly grave situations faced by the protagonists’ reactions as they happen. There are references to global developments, but the attention is unwaveringly on the main characters. Their decision to stay for too long in Italy makes us want to urge them to flee – but those who lived through these horrific times did not have foreknowledge of history.

Levi’s chronicling of life as it unfolded makes an indelible impression and shows how decisions may depend on imperceptible factors, including character and emotion. The fact that the novel is inspired by the true story of the author’s husband, Luciano Tas, adds yet more poignancy and force to it. An excellent read, and a necessary one for humanity’s collective memory.

Valeria Vescina is a novelist, critic, guest lecturer and director of the Hampstead Arts Festival’s literary programme. A graduate of the Goldsmiths Creative Writing MA, she debuted with That Summer in Puglia (2018) and is working on a novel set in sixteenth-century Italy.