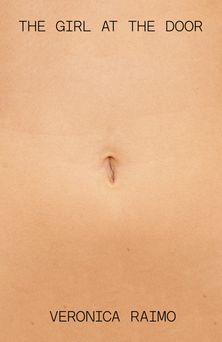 #RivetingReviews: Valeria Vescina reviews THE GIRL AT THE DOOR by Veronica Raimo

‘I was in my sixth month when the girl came knocking.’

‘The girl’ is an art college student, and she is knocking at the door of her philosophy professor and his pregnant girlfriend. Neither their names nor that of the unexpected visitor are revealed at any point in the novel, whose short chapters are narrated alternately by the ‘Her’ and ‘Him’ in the couple. These are some of the bold stylistic choices that give a sharp edge to Veronica Raimo’s intelligent novel, not least because the girl is at the epicentre of the story: she has just reported the professor for rape and has come to tell his girlfriend. The sexual violence happened two years earlier, she says, and ‘in a certain sense, always, all throughout our affair.’

We are in Miden, a fictive ideal community in an unspecified Northern Europe, where the delay in coming forward is of no consequence: the girl has only now gained awareness ‘that I was subjected to violence’ and her accusation triggers a process whereby people familiar with her teacher provide evidence about his character and attitudes, taking ‘into consideration “possible cultural conflicts”’. The accused and his partner in fact hail from the outside world, whose economic and social fabric has been devastated by ‘the Crash’. Few outsiders are allowed to reside in Miden: only those deemed capable of espousing its ethos are admitted. The community is organised into ‘Commissions’ whose ultimate aim is the wellbeing of every citizen. ‘We want to be happy. That’s our Dream.’ Protocols regulate every aspect of life. The category of trauma suffered by the girl even has a number: 215. In Miden vocabulary, the two parties in the case are called ‘the Perpetrator’ and ‘the Subject’; his girlfriend thus becomes the Perpetrator’s partner; in the eyes of the community, all three are reduced to these roles. As the story unfolds, it becomes less and less clear whether Miden is a utopia or a dystopia. In the end, the professor’s partner must reach decisions based on the new light shone by events on her boyfriend and Miden – and on herself, as much of the story is about her personal growth.

Complexity and ambiguity are the hallmarks of this unsettling, thought-provoking novel. The author eschews explicit signposting in favour of cumulative hints and believable contradictions – in characters, relationships and societies – which the defamiliarising backdrop brings to the fore. The girl and the professor’s versions of their liaison differ: she accuses him of sexual violence; he thought theirs were consensual erotic games, and that he loved her; but the girl’s trauma is real and there are some parallels between her and the accused’s pregnant girlfriend, starting with their initial submissiveness. Raimo leaves readers to judge: was there any love at all on his part, or only desire, fetishism, possession and the drive to dominate, self-justified with the word ‘love’? Can any of these ever coexist with love, or do they often taint it, but only to hardly perceptible and therefore unrecognised degrees? If the Commission or the reader returns a guilty verdict on the professor, what should the community do? Eject him or reform him? Punish or re-educate?

The incapacity to acknowledge or integrate different aspects and perspectives is a fil rouge running through the protagonists’ characters and relationships, and the society of Miden as a whole. Indeed, the ‘Miden Dream’ survives only by codifying, regulating and controlling even something as spontaneous as a welcoming hug (‘you open your arms and then you embrace the new citizen, trying not to overwhelm the other with your own body’) and by avoiding, rather than engaging in, true dialogue. It’s no coincidence that the story makes explicit reference to the ‘hedgehogs’ dilemma’, Schopenhauer’s illustration of the continuous search for the right distance in human relationships. The book’s ending is brilliant – at once surprising and coherent.

The Girl at the Door is in tune with the concerns of the #MeToo movement, but Raimo began writing the novel years before its rise. The book is relevant also to other burning issues. It highlights the question of the failure to see clearly and to seek dialogue not only at a personal level but at a societal one, especially in the age of social media, when views of history and the present seem to polarise around extremes.

The narrating ‘Her’ and ‘Him’ give us insights into their characters through prose that successfully mimics the directness of self-talk: hers, almost mercilessly truthful; his, sexist and self-serving. Their words are interspersed with letters from the girl and from her father, and with questionnaires filled in by witnesses whose anxiety to conform is deftly conveyed. Stash Luczkiw’s translation brings these very different voices highly effectively from Italian into English.

This is a book which challenges you to work hard and amply rewards you for it: a gripping read in its own right, and fiction that enhances our engagement with the world we inhabit.

THE GIRL AT THE DOOR (or MIDEN in the Italian original)

Translated from the Italian by Stash Luczkiw

Valeria Vescina (https://valeriavescina.com/) is a novelist, creative-writing tutor, literary and opera reviewer and the Director of the Hampstead Arts Festival’s literary programme. She was educated in Italy, Switzerland, the UK and Germany. She lives and works in London. Her debut novel, That Summer in Puglia (Eyewear Publishing), is a work of literary fiction launched at the FT Weekend Oxford Literary Festival 2018. She is currently writing her second novel, a story of women set in sixteenth-century southern Italy. She holds an MA in Creative & Life Writing from Goldsmiths and is a Board Trustee of the Hampstead Arts Festival.