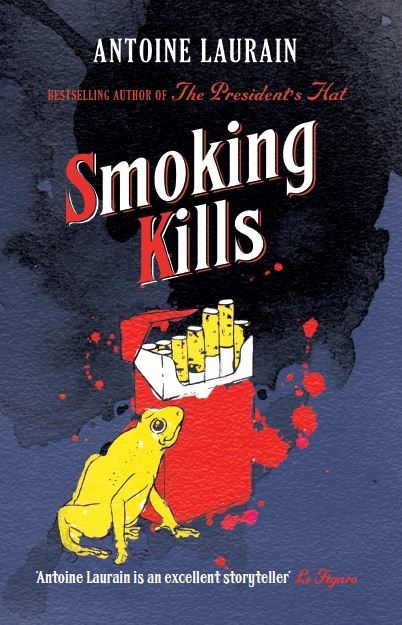 The title says it all: smoking kills – though in the case of this novel, the victim is not the smoker but those he kills (‘and not through passive smoking,’ he clarifies) in order to enjoy the pleasures of a cigarette. We’re firmly in humour noir territory: the book’s incisive, satirical take on modern-day life offers a succession of laugh-out-loud moments.

The protagonist and first-person narrator is Fabrice Valantine, who in the opening paragraph reveals the salient facts about himself: he was married and had a daughter, worked as a respected head-hunter for 25 years, and is now serving a prison sentence for murdering four men. He swears that his ‘unusual trajectory … was all the fault of the cigarettes’. What can he mean? As author Antoine Laurain deploys narrative techniques from crime fiction to take you through his anti-hero’s rocambolesque ‘trajectory’, you cannot help but be hooked.

Cigarettes are the thread connecting Fabrice Valantine’s major life events: his baccalaureate, his ‘first time’, the first encounter with his wife – and the four murders, which, ironically, are triggered by his attempt to stop smoking. The satirical vein running through the book comes across strongly in the excellent English translation by Louise Rogers-Lalaurie, and the story juxtaposes elements of reality and of the absurd. The dramas and humiliations of corporate life, the tensions between a father and a teenage daughter, and the shock of a marriage coming to an end are all believable and sit alongside bizarre events that require that we suspend our disbelief: the seemingly irreversible effects of hypnosis carried out on the protagonist by a crook passing himself off as a trained specialist; and the inventiveness of the murders. Suffice to say that the weapons of choice include a frog, a mirror and explosive light bulbs. Whilst browsing the internet for tips on how to kill, Valantine comes across a blog by an elderly ex-CIA assassin who writes of his exploits for the dubious benefit of his grandchildren: ‘Know this, my darling young ones: your grandpa … committed no less than fifty-seven homicides for the noble cause of US democracy.’ At first, Valantine regrets that ‘Grandpa Edward’s crimes were so extraordinary that reproducing them … would not be easy.’ But his own ‘creativity’ will surpass the master’s.

Contemporary art is a particular target of some of Valantine’s most hilarious quips. It features throughout the story, as his wife, Sidonie, is editor-in-chief of an ‘iconic contemporary-art review’. Regardless of your personal outlook on installations, it’s difficult not to chuckle at the description of Sidonie’s lover as ‘the Grand Carboniser’, the man behind ‘Inflammatory Art’, consisting of ‘cheerfully chargrilled’ pigeons.

Antoine Laurain is a compelling storyteller. The writing flows effortlessly, alternating action and reflection, the present and flashbacks, the sad and the comical. There’s a great deal of clever foreshadowing that becomes apparent upon second reading. Valantine takes you into his confidence with a jaunty, discursive tone. He tells you he used to be ‘an unremarkable man, bordering on the dull’, but that ‘forces beyond my control drove me to become a killer’. The pleasures of smoking and the compulsion to light up are vividly rendered, as you’d expect in a story in which cigarettes drive forward the action to such a memorable extent.

If you’re looking for a fun read that exercises the ‘grey cells’, then Smoking Kills could be just the book for you.

Translated from the French by Louise Rogers-Lalaurie