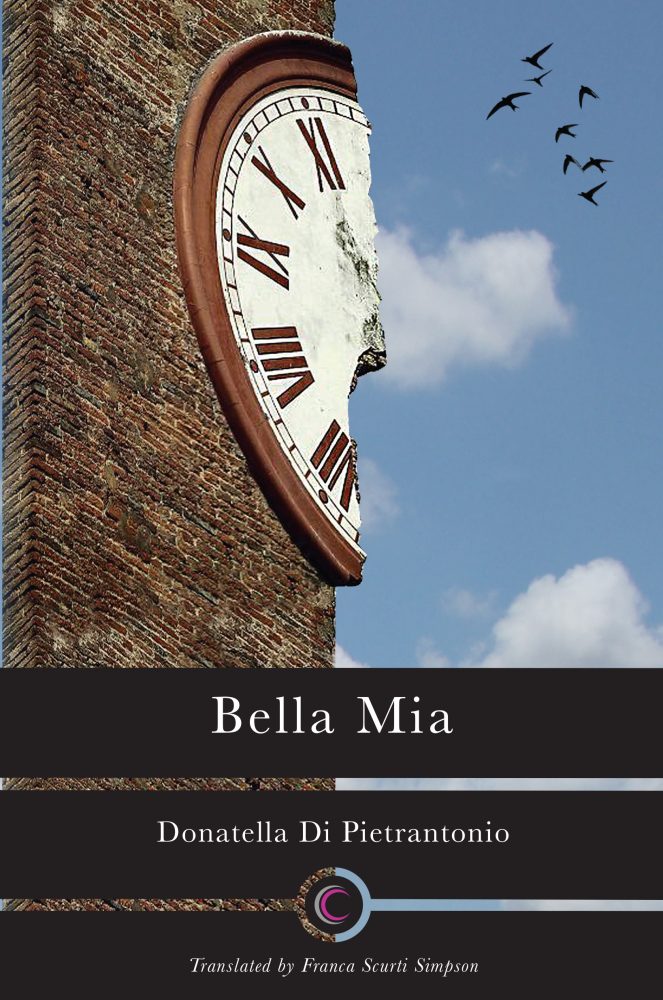 1: a shaking or trembling of the earth that is volcanic or tectonic in origin

Most of us won’t have experienced the convulsions of the ground, which also in 2016 have devastated entire communities, from Ecuador’s Manta to Italy’s Amatrice, but the news coverage will have driven the horror home. And who hasn’t grasped since childhood the extent of the turmoil implied by the figurative sense of the word? That is one of the reasons why this novel of loss and of the subsequent existential journey, set in the aftermath of the L’Aquila earthquake, establishes an immediate connection with the reader.

The title Bella Mia refers not to a woman but to L’Aquila, in a folk song full of nostalgia for this legendary city of the ninety-nine churches and ninety-nine fountains. In the novel, there is no returning to it: it will not be the same after the 2009 earthquake, even if the original stones and bricks are used in the re-building. Similarly, the reconstruction of the survivors’ identities and relationships will require more than reassembling pieces of their former lives. What the novel’s protagonists cannot foresee is the transformative power of love and creativity.

The three main characters are linked by a fourth, Olivia, who perished in the earthquake. The first-person narrator, Caterina, is her twin. She is sharing temporary accommodation with her elderly mother and with Olivia’s teenage son Marco in one of the “new towns” of prefabs. Caterina had been the weaker of the two sisters, never wanting to have children, believing herself not able to look after another, when standing on my own two feet is hard enough. She is now ashamed to be there, alive by mistake. […] The earthquake lottery […] saved me, and I am sometimes wistful for the end I was denied. I’m not a mother; he [Marco] isn’t the fruit of my narrow womb. […] He scares me, as does the enormity of my task.

The task of all the characters is to find a new balance, now that the earth has stopped shaking. Balance is the quality permeating the novel, almost as if, through the elements of writing, the author were whispering cues to help her fictional creatures attain their own balance. The author denounces the superficiality with which the inhabitants were reassured after the first tremors, the shoddiness of the “new towns” and the authorities’ insensitivity, but does it through Caterina’s passing remarks and actions. Upon moving into the prefab apartment, she and her mother find a bottle of spumante wine waiting for them from the government. Caterina opens it carefully to stop it popping and drains the contents into the sink. Her action needs no explanation. The narrator’s voice may give a first impression of spontaneity, with her terse sentences and the force of her initial fear and anger, but this is counterbalanced with lyrical insights disguised as throwaway comments. There are no concessions to sentimentalism. Details of the tragedy and its prolonged aftermath are realistic and yet eschew the gore and the grime: the novel’s primary focus is on the internal worlds of the survivors, who are yearning for light. The outstanding translation by Franca Scurti Simpson renders faithfully all aspects of the writer’s style, most crucially, its concision, which demands that every word convey its precise meaning and echoes.

Caterina’s process of reconstruction involves acquiring that part of herself which she had left to her twin. Olivia was simply the best part of me. I willingly showed her my weaknesses so that she could take care of every one of her younger twin’s fragilities, she who was so full of grace and fortune. But as she learns to take care of their elderly mother, of Olivia’s son and of a young neighbour who has lost her little girl, she understands that it was too simple for her and others to rely on Olivia. She seemed to be able to do everything without effort, without pain. She didn’t know how to complain, and this not knowing is how she lost herself in the end: when the earthquake struck, she made Caterina and Marco leave the home while she searched for his jeans to spare him embarrassment. Nobody, other than our mother, had ever really paid attention to her. […] As happens to those who appear to be too strong, she wasn’t protected, she seemed not to need it, independent and invulnerable creature that she was. Caterina comes to realise that Olivia wasn’t always happy: she gave Marco an imaginary father by making every effort to protect the child from noticing her husband’s neglect of them both.

The leitmotif of balance is therefore carried also by the two instruments of Caterina’s transformation: the outward focus which gradually alters her innermost self, and the specific form of her artistic expression. Caterina is in fact a ceramicist. From the earth which reduced to rubble all that I had made, issues the clay with which she gives shape to her new creations: baubles decorated with birds, which will lead her to a man who understands her intent and to whom she’ll open up; and her sculptures of the screaming twins where she depicts Olivia’s mouth open in an unending scream, while her own expression surprises her: she continues to shout but she’s overwhelmed by beauty.

On hearing the call of a scops owl, a repetitive kew in e-flat, for the first time since the night of the earthquake, she is not distressed but elated. There is a sort of hope in the note. She has leapt beyond her old self, in which optimism was an unusual state of mind. Of the owl’s dual favourable-mournful symbolism in Italian folklore, she has chosen the less common one: the auspicious connotation dating back to the cult of Minerva.

It would be incorrect to infer too much neatness from the symmetries in the book’s structure. The subtle play of balance and counterbalance constantly engages the reader, while offering a reassuring framework to explore the chaos of complex issues with no easy answers. Between those things left unsaid by one character to another, those musings with no clear-cut conclusions, the action suspended in mid-air as the novel closes, the author leaves space for readers to fill in the gaps – in the book and beyond.

It comes as no surprise that Donatella Di Pietrantonio has been hailed as one of the most notable debuts of the past decade on the Italian literary scene. Bella Mia won the Brancati Prize and was shortlisted for the Strega Prize, two of Italy’s top literary prizes. English-language readers can now discover why.

Translated from the Italian by Franca Scurti Simpson

Valeria Vescina is a graduate of the Goldsmiths Creative Writing MA, as well as of London Business School, of which she is a Sloan Fellow. She has just finished writing her first novel, which is set in her native Puglia, and is researching her second, inspired by true events she discovered in a sixteenth-century manuscript. She teaches creative writing for various institutions, including the Royal Borough of Kensington & Chelsea. She is a speaker at the 2016 conference of the National Association of Writers in Education.