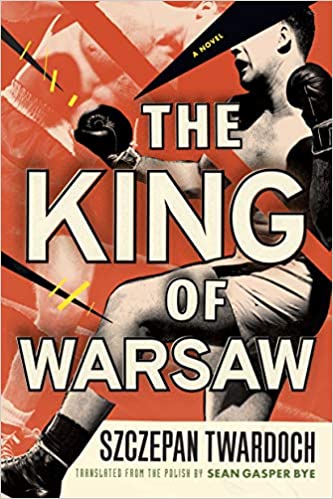 Warsaw 1937. Jakub Szapiro, a Jewish thug and champion boxer, the same age as the century, is the eponymous ‘king’ of Szczepan Twardoch’s novel, although he comes into his kingdom only when he inherits it from the Polish crime baron Buddy Kaplica, a ‘godfather’ figure, who controls Warsaw’s Jewish quarter (the so-called Northern District) through extortion rackets. As Buddy’s trusted sidekick, Jakub grows rich and enjoys a lifestyle unimaginable to most Warsaw Jews. Driven in part by envy and by his desire to avenge the discrimination suffered by Jews, Jakub acquires the outward attributes of assimilation. To the Jews of the Northern District, he is a hero, not only in the boxing ring, but also in the political arena, as their defender against the rising tide of antisemitism. This is the single noble aspect of Jakub’s activity, and it is no coincidence that one of his opponents in the boxing ring is a member of Bolesław Piasecki’s ‘Phalanx’, a Polish pre-war antisemitic organisation, whose blond Aryan features contrast with Jakub’s own. At various points in the plot, Jakub mobilises his gang in defence of Jews.

Unravelling as two interwoven threads – set in 1937 Warsaw and 1988 Tel Aviv – the story is ostensibly a memoir written by a former member of Szapiro’s gang – now the decorated Israeli general Moshe Inbar, but originally the seventeen-year-old Mojżesz Bernsztajn, whom Szapiro allegedly takes under his wing as a kind of recompense for murdering his father, the frum Naum, for non-payment of protection money. The Jewish characters, including the young Bernsztajn, communicate in the characteristic Yiddish spoken in Warsaw; the translation uses a phonetic transcription similar to the author’s, with English in footnotes. The Israeli dimension is integral as Jakub responds to his Zionist brother’s entreaties to abandon Poland for Palestine, a conundrum that torments Jakub until the final moment, when he realises he cannot ditch the city where he has become the undisputed king of crime.

On one level, the novel is an action-packed gangster tale, moving at rip-roaring speed, ably preserved in the translation, and containing explicit scenes – blood, hacked bodies, literal shit and sexual violence. Yet these are counterbalanced by an almost loving attention to detail: the fetishist interest of the hoodlums in various calibres of gun and exclusive makes of car, or the topography of Warsaw itself – the cramped streets of the Northern District, the fashionable bars of the city centre, the cityscapes seen at night from a fastmoving car. Not all the poetic imagery is explained: an intriguing recurring image is the sperm whale visible in the sky singing his ‘hunting’ song above the latter-day Nineveh.

On another level, the book portrays Polish national politics in the years leading up to the Second World War. Described is the gangsters’ involvement with labour movements, Polish as well as Jewish, such as Buddy Kaplica’s former membership of Piłsudski’s socialist party, which had once provided him with protection. Integral to the plot’s development is a planned coup by Polish military top brass and their supporters, including unofficial antisemitic movements as well as establishment figures – prosecutors, policemen, prison-camp guards and political journalists. Hinting at what is to follow, this aspect seems to pose the question as to where the greater violence may lie.

THE KING OF WARSAW