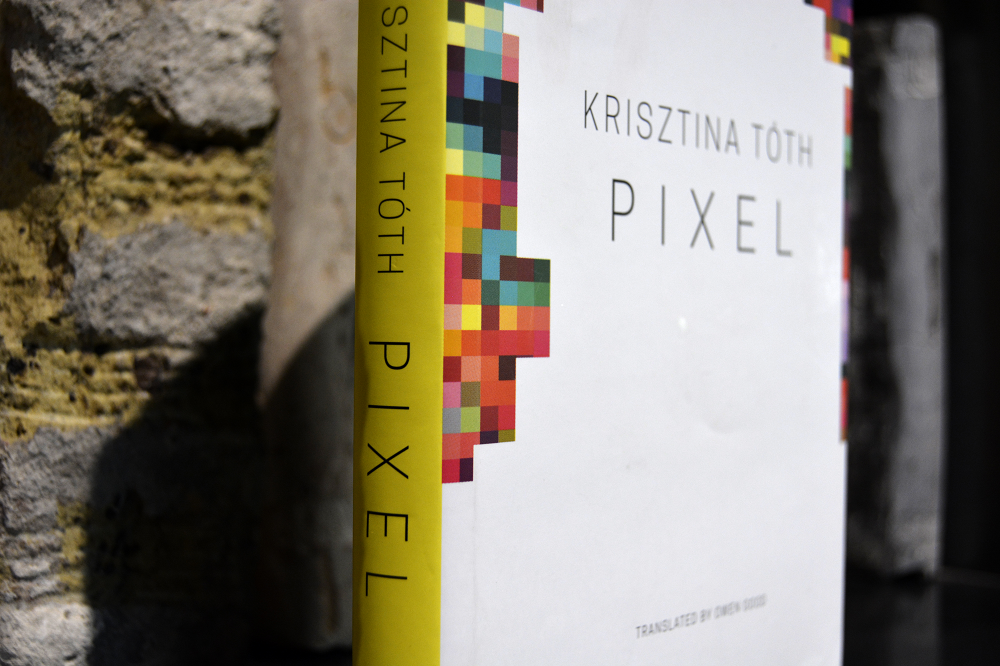 A silk kerchief that turns out to be a department store freebie instead of the elegant accessory its wearer, a radiology assistant on a rare work trip to Western Europe, believes it to be. Lunch cooked by an elderly mother for her visiting family, with ‘leftovers’ already portioned up in Tupperware boxes to be taken home. A glamourous blind woman wearing high heels and a wristwatch travelling on the underground. Stubby little fingers, which might or might not belong to a little boy who was killed during the Holocaust. Or a girl who survived, and now lives a contented, if somewhat misplaced life of an elderly lady in Paris. Christmas trees bought from the same seller, first for the lover, then, the next day, for the wife. A sculpture made of teabags. A gypsy boy travelling up from the countryside to Budapest, trying his luck in the capital. A French doctor in Romania. A break-up. A car accident.

Krisztina Tóth’s Pixel is a beautiful tapestry of stories, weaving together people’s life, connections and very human experiences. The thin volume looks like a short story collection but is really a non-linear novel with an open end, inviting the reader to continue some of the storylines in their head. Each of the 30 short chapters is dedicated to a different part of the body, e.g. the Neck’s Story, the Back’s Story, and so on. Very aptly, Tóth calls the book a Rubik’s cube of stories where the individual elements can be connected and disconnected again in time and space.

I’ve known the author’s work previoulsy as a Hungarian poet and a writer of unusual children’s stories. She has a gloriously disgusting book about a family of snot, including their pet bacteria, living in a little boy’s nostrils, which was a favourite bedtime story for my kids when they were little, especially during flu season.

Pixel is the first ‘grown-up’ novel I have read by Tóth and I’m already looking forward to reading more. What I enjoyed about Pixel is the unexpected mixture of tragic, intense events most of us are lucky not to be familiar with, or might only read about in history books or the news, as well as ordinary, everyday situations, which are often quite dull or even ridiculous. Like being sent off with leftovers – in fact I don’t think you can claim to be Hungarian unless you have relatives who pack you off with strudel and meat in neat boxes and big jars filled with pickles, even if you are only visiting for the weekend with a small carry-on travel bag.

It’s not easy to pick a favourite chapter, but I really liked the Tongue’s story about refugees arriving in a Hungarian village after the Greek civil war. They don’t speak each other’s language and they are deeply suspicious of each other, but both sides try to make the best of the situation. The Greek men are exhausted, dispirited and hungry. They are led, still clutching their bags containing all their possessions, into the parish hall to rest while the welcoming villagers, themselves quite poor, prepare a meal for them. The refugees are left bewildered when they are presented with food they don’t consider edible – poppy seed pasta, a nursery food staple in Hungary – and proceed, much to the shock of the Hungarians, washing off the mixture of ground poppy seeds and icing sugar from the pasta under the tap as they think it is ash. I thought about all the times we mean well but end up getting it wrong. And despite all of these wrongs, people still have some miraculous ability to adapt to a new life and make connections with others different from them across cultures, language, circumstances.

Veronika Pimper works in the Donor Co-Financing team at the European Bank for Reconstruction and Development. She is Hungarian and manages EU investment grants for EBRD projects in Central Asia, Eastern Europe and North Africa. Veronika attended the launch party of Pixel’s English translation earlier this year, and is very excited about the book making the EBRD Literature Prize shortlist!