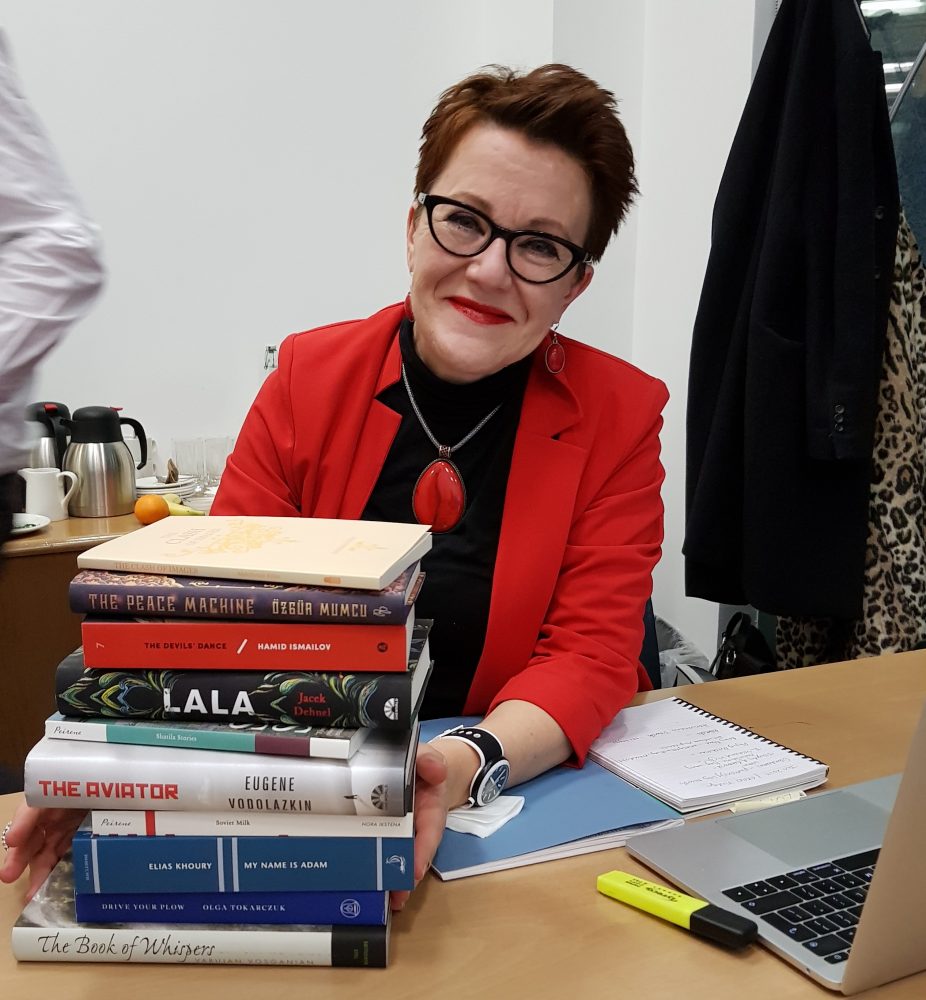 A funny and perceptive novel set in rural Poland about life and death; an unconventional thriller guided by astrology and a love of animals and William Blake.

Olga Tokarczuk writes books that matter. In a remote Polish village, a reclusive woman called Janina Duszejko mourns the disappearance of her two dogs, her “Little Girls”. Janina is a great invention: a former bridge-builder and teacher, a vegetarian and astrologist who watches the stars, knows the date of her own death and prefers animals to most people. Then the murders begin. This is a real page-turner of a story, an unusual and loose thriller, but never totally subsumed by the thriller idea thanks to the magnificent descriptions of nature and the many beautiful asides by Janina on the big questions of her life – her animals, ailments, anger, William Blake, feminism, the cosmos, life, love and translation.  Tokarczuk’s voice (and the translation) is fresh and vital, amusing and original. This may not be as deeply intellectual, tightly structured and brilliantly experimental as her other novels but I think this one will reach more readers

Lala is a moving and lively tribute to a brave, independent woman who trawls through her memories of Poland in the twentieth century as she succumbs to dementia.

I love Lala – the woman (the author’s grandma in fictional disguise) and Dehnel’s writing. He was only twenty when he wrote this, his first novel, and his great gifts were evident early on.  Dehnel is a painter, poet, translator and public figure – his passion, lush prose and youthful exuberance are infectious. In Lala he goes for total immersion into the history of his family and of Poland. It’s a moving and often funny tribute to a brave, independent woman who trawls through her loves, losses and memories of the twentieth century as she succumbs to dementia. Keep a notebook by your side to keep track of the names and gear-changes but you are in for a rollicking ride with this miracle of a novel, brilliantly translated by Antonia Lloyd-Jones.

A Latvian bestseller about the lives of three women living under Soviet oppression.

This is an invaluable memoir of Latvia’s recent past, covering a span of five decades, from the end of WWII to the tottering of the Soviet monolith. It is also one of the most devastating novels I’ve ever read about women’s lives in any society, made even more poignant because it is based on Nora Ikstena’s own story – her childhood in Soviet-occupied Latvia spent with a mother who committed suicide before knowing the freedom of independent Latvia.

A poignant and lyrical novel about an Armenian family, the 1915 massacres, and – through the story of its Romanian-Armenian author – the stories of the survivors and descendants.

It seems wrong to describe such a harrowing novel as beautiful – but it is. This is the fictional masterpiece about the Armenian genocide, narrated in heart-breaking, poignant and lyrical style by the prominent Romanian-Armenian author and politician. As a child Vosganian was told that he was “destined to be the family historian,” so based on archive research, witness testimony and his own biography, he semi-fictionalises the story of his grandfather Garabet, the main character.  A century of stories ensues, of teeming village life, markets, ancestors, priests and shepherds, photographs, smells (the coffee! the spices!), sights and sounds, stopped so brutally in 1915. With the mass extermination of 1 ½ million Armenians by the Ottomans the old life is over. The family escape and become refugees in Romania. Whispers blow through the novel: they are both voices of love but also of death, secrecy and fear.

A highly original novel created by nine Syrian refugee-writers inside the Shatila camp in Beirut: their own stories told by them.

This is a triumph of collaborative, creative storytelling and even more of a triumph as these nine stories successfully form a tight and compelling novel. The lives of the main characters, Adam, Reham, Shatha and Marwan, all Syrian refugees struggling to survive in Beirut’s sprawling Shatila camp, overlap as they negotiate the daily difficulties of poverty, despair, violence and drugs in the camp, and as they attempt to escape outside to education and jobs, and even to fall in love. The chapters are so painfully and astutely written ‘from inside’, the lives, loves and losses so authentic and unfabricated, that you are in deep mourning by the end – because this exquisite novel is over and that our fellow human beings should suffer so much.

This is a thrilling novel about two real-life Central Asian poets. The 19th century Uzbek poet-queen Oyxon, once a humble slave girl, rose to power and influence, marrying three Khans along the way and was ultimately threatened with execution. Her 20th century counterpart is the writer Abdulla Qodiriy, renowned, brave and also imprisoned, who distracts himself from torture and interrogation by reconstructing the novel he was writing about Oyxon when he was arrested. With its spies, police, princes, poets and great plot, this is an Uzbek Game of Thrones. The storytelling style captures perfectly the prose and poetry of Central Asia while being incredibly readable in English. A novel within novel narrated by a great novelist with an equally great translation.

Look no further: here is your daring and dastardly EBRD Prize adventure story!

Think Monty Python meets Jules Verne. The reality of a Peace Machine to end all wars may be impossible but the fantastic fiction created by this debut Turkish novelist and his protagonist Celal (street urchin-turned-erotic-novelist-and-gentleman), as they pursue the machine from Istanbul to Paris to Belgrade, flew off the page.  It is a riotous, rollicking historical adventure novel set in Europe in the tense period before the first World War, a crazy quasi-erudite fantasy.  There are long, lyrical proclamations about peace/war/life/nationhood/ideals but because of the wonderful lightness of touch with the prose, and Mumcu’s daring imagination, we never feel we are being lectured to.

My Name is Adam is a life’s work and with this major novel, brilliantly written and translated, Khoury is a witness to Palestinian history.

For its ambition and literary brilliance this was an obvious EBRD Prize contender. As readers you know from the outset that this is a masterpiece and important novel, brilliantly written and translated. My Name is Adam is a life’s work and Khoury is a witness to history.  He’s written his legacy, a fictionalized attempt to understand the 1948 Palestinian Nakba and the Israeli occupation and to alert us to the wealth of literatures, language and interpretations connected to these peoples and to their unresolved struggle. It is a tragic and grand novel which will both enrich and frustrate readers. There are many layers, false starts and fictions to navigate – for starters: Who is Adam? Is that his real name? – but this novel resembles a magnificent house built over many decades and its architecture is made to last.

The vast world of an acclaimed Moroccan writer and thinker, a complete read and beautifully imperceptible translation burst open within the simple covers of this slender volume.

This is a deeply effecting book. Kilito reconciles himself and his characters to the changing world of Arabic life and language with his vivid characters and stories depicting the clashes and challenges of text and image; classical and modern language; European, modern and Arabic influences; image and identity.  He is a sophisticated analyst but his fiction is so spellbinding and often funny that you glide through this collection of stories happily hypnotised. His focus is the child Abdallah, a lover of comic books and cowboy films, and his extended family, in his personal journey from Quranic school to French education, love, death and modern life, questioning our modern relationship as humans with words and images.

Like all the best science fiction this is firmly based in reality but what can a cryogenically frozen Aviator reveal about a century of Russian history?

What a splendid idea, to relate the history of 20th century Russia through the eyes of a Robinson Crusoe-loving time-traveller. The Aviator Innokenty lived through the Russian Revolution of 1917 and the Bolshevik labour camps but was then cryogenically frozen in a medical experiment – hence missing out on Stalin’s Purges, the Cold War and the collapse of the Soviet Union – and waking up (defrosting!) in modern Russia.  He recovers his lost memory by writing a journal. The slow, meandering memory-recall of ‘Part 1’ – Innokenty’s hospital defrosting period – is followed by a very lively, warming-up ‘Part 2’ with multiple narrators describing his return to society (wonderfully evocative St Petersburg), where he falls in love and becomes a media celebrity. However, the media are frustrated by the fact that Innokenty doesn’t remember the grand historical events of one hundred years ago but rather their smaller details – the smells, emotions, sights and sounds of history.

Rosie Goldsmith (Chair of the Judging Panel) is an award-winning journalist specialising in arts and foreign affairs. In twenty years at the BBC, she travelled the world and presented several flagship programmes. Rosie is a linguist and has lived in Europe, Africa and the USA. Today she combines journalism with chairing and curating literary events and festivals for leading cultural organisations. Known as a champion of international literature, translation and language learning, she promotes them whenever she can. She is Founder and Director of the European Literature Network.