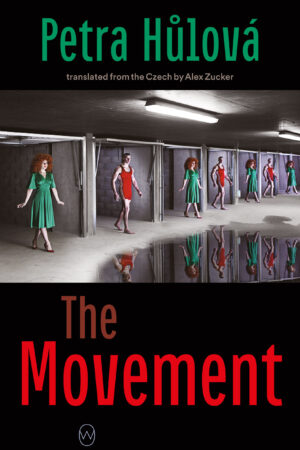 ‘“to view women as human beings, not cunts”’

This, in its official articulation and in a crude nutshell, is the aspiration of the ‘Movement’, the shadowy motor of sexual revolution that presides over Czech author Petra Hůlová’s provocative dystopian novel.

The narrator who grants us a window into this upturned world is a former employee of a sex-doll manufacturer called ‘Pornjoy’, who now spends her days training youth-obsessed men to get off on ageing women as a zealous and – luckily for the reader – gaily expansive employee of the titular Movement.

Re-educating male ‘clients’ to change their sexual ideals and instincts turns out to be a full-time occupation, requiring her to live on-site at the former meatpacking plant (now repackaged as ‘the Institute’) where the men are interned – occasionally as pliant subjects, but invariably against their will. There, she is tasked with conducting round-the-clock surveillance of their progress along the road to a ‘New World’ model of manliness.

The opening leg of the book takes the form of one sprawling chapter, broken only by intermittent paragraph breaks. This structure stealthily reinforces the sense that once the Institute has you in its grip, there’s no ready escape. For a sense of perspective, the narrator tells us at one point that a stay of eighteen months or less is judged an ‘outstanding’ result.

The first chapter change comes over halfway through, when the narrator fleetingly emerges for air (or pokes her head above the parapet, depending on how you see it) to visit one of the Movement’s more benign sounding ‘Community Centers’, reserved for women who still need re-educating out of their ‘Old World’ ways. Although packaged as some kind of Center Parcs-inspired retreat, the reality proves rather more sinister.

After this field trip to meet some of the benighted wives of her male charges, followed by a stop-off at the nursing home where her mother lives as one of the perks of the narrator’s employment at the Institute, it’s back to the main site for the ‘final exam’. This is the ultimate test of the candidates’ long-suffering Pavlovian training, as they strive to secure their release by proving that they’ve successfully internalised the anti-objectifying precepts of the Movement. By this point, after spending the best part of 300 pages with the narrator, and watching on with a mixture of pity and morbid fascination as her ‘clients’ were ruthlessly put through their paces, I was already suspecting it wouldn’t be your classic essay-question format. Without revealing the details, suffice to say that ‘showing your workings’ is given a whole new meaning.

Perhaps as a note in the book’s cons column, or perhaps in tribute to the author’s parallel-universe-building talents, I did come away from the final pages with something of a sense of anticlimax. I couldn’t quite work out if the midway detour away from the Institute, in loosening the vicarious straitjacket of the opening section, had released some of my interest along with it, or if I’d just spent so long in the shocking dystopian world Hůlová paints that I’d become harder and harder to shock. Either way, this remains an undoubtedly intriguing book, underpinned by an interrogation of the sexual values that structure contemporary society, rendering it as thought-provoking as it is provocative. I’m not convinced the ‘New World’ extolled by the narrator provides the answer, nor that utopianism is Hůlová’s intention, but the portrait of this revised world order does a compelling and disturbing job of questioning the foundations of the ‘Old World’ we still live in.

Alex Zucker’s translation is also superb, capturing the narrator’s unexpectedly witty blend of officiousness and cynicism (and occasional flourish of downright sadism) to a tee.

All in all, well worth a read.