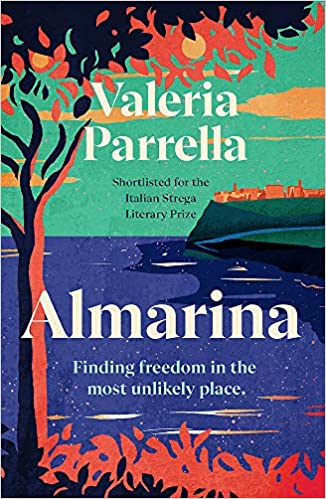 Opening the cover of Almarina – which bears the image of a cobalt-blue sea seen from a lush shoreline and the strapline ‘Finding freedom in the most unlikely place’ – to find an epigraph from Antonio Gramsci’s Letters from Prison, I had my first inkling of why, on the edge of this apparent idyll, freedom might not be so near at hand. A couple of paragraphs into the prologue, as the narrator, Elisabetta Maiorano, introduces herself as a teacher at Nisida youth detention centre, everything clicked into place.

Once inside Nisida, the centre’s metonym, derived from the tiny island off Cape Posillipo on which it is located, we turn our backs on the ocean vista to plunge into Elisabetta’s life as a prison maths teacher, and as a fifty-year-old widow struggling to come to terms with the loss of her husband. In contrast to the clean lines and rigorous logic of her discipline, the contours of Elisabetta’s mind follow an erratic course, her attention ricocheting from daily reality at the centre to jumbled vignettes from years gone by – a panic attack in Paris as a student, a childhood row with her mother, her failed attempts to conceive. Instead of pushing towards a new horizon, she seems to be struggling against a tide of unwieldy memories, staring into the past with regret and at her own reflection with misrecognition. In Elisabetta’s words, all she now meets in the mirror is ‘an old tired woman with a raging hangover … unable to hold the mascara because crying comes more naturally to her than make-up’.

The turning point comes with the arrival of Almarina. A sixteen-year-old refugee from Romania, Almarina escaped to Italy in a lorry with her little brother to flee their abusive father and has ended up in Nisida after stealing a mobile phone. Slight and shaven-headed, she wears the scars of her turbulent upbringing on her disfigured body and in her struggles with basic sums, yet she also rallies her teammates to victory on the volleyball pitch, marvels with childlike wonder at pizza dough rising, and dreams of becoming a perfumer and being reunited with her brother. Through this capacity to dream, and to savour the scraps of joy in a life that has offered her precious little, she also wins Elisabetta’s heart, and instils her with a new sense of maternal purpose. When Almarina’s sentence at Nisida comes to an end, and Elisabetta is faced with the prospect that Almarina will vanish into the blue ‘like all the others I never saw again’, she finally finds the impetus to wrest herself from the countercurrent of the past and push herself towards an alternative future.

Nisida youth detention centre is a real place. In a visit there in September 2021, Italian President Sergio Mattarella stated that detention should not be regarded as an ‘indelible stain’ on those who pass through Nisida, but rather as ‘a scar that disappears’.

In Almarina, Valeria Parrella suggestively repositions Nisida not as a blemish to be washed away, but as the source of the healing process, and shows that its lessons in how to live again, and live better, can work in both directions. In truth Almarina is just as much a teacher as Elisabetta. The one who, in turning up so visibly in need of a life raft, unwittingly provides Elisabetta with the means to stay afloat too.

Rosie Eyre is a literary translator from French and Spanish, and assistant editor at the European Literature Network. She was a National Centre for Writing Emerging Translator 2020-21, and won third place in the 2021 John Dryden translation competition. She is also Prize Co-ordinator for the Stephen Spender Trust.

Read Rosie Eyre’s #RivetingReview of THE MOVEMENT by Petra Hůlová