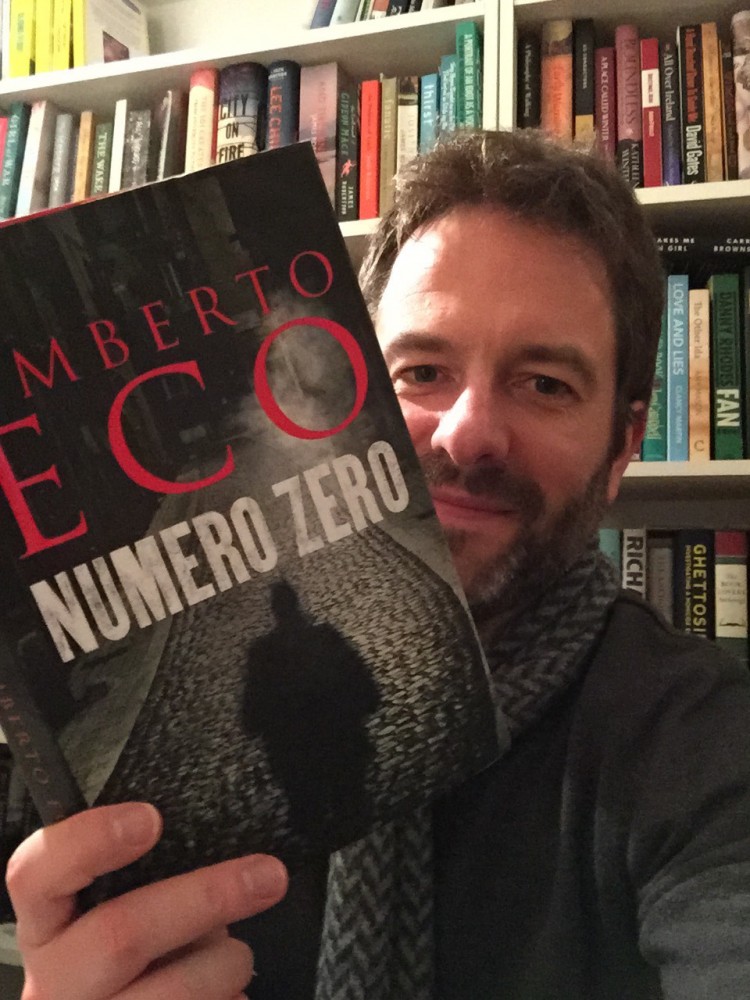 As readers we often feel a sense of melancholy when we come to the end of a book we have enjoyed. That sense of loss is unnervingly heightened when we finish a novel only for the author to die a few days later. How does their death affect the meaning of what we have just read, especially now it has become the fabled ‘last novel’? What does it say about the relationship of the author to their work? Why should the author’s life or death influence the words on the page? Why, as readers, do we need to know there is an author behind the book we are holding? What shadow is cast over the page by the author?

These very questions about the relationship between words and the world have been explored and analysed, philosophised over and played with through the life’s work of Umberto Eco. So it was a strange moment for me to finish reading his latest novel Número Zero and barely two days later to be shocked to hear of his death.

In popular culture, Eco himself is too often defined by one novel, The Name of the Rose, his debut novel, for many represented by the image of Sean Connery in monk’s cassock. So like an Eco character, the author is defined by the image of an actor in the interpretation of a film, adapted from the book, created by the man. The true meaning is lost, the real Eco, a ghost in the machine. But before and since then, he has written a stunning array of works exploring history, philosophy, culture, politics and literature. He was a rare cultural polymath, casting his unique European intellect upon our world in an attempt to help us better understand.

Número Zero is a short novel. I confess I finished it feeling a little short changed but that was primarily the fault of the dust jacket blurb promising a murder in the plot sooner than was actually delivered, which led to an initially disjointed reading experience. This is a novel that slowly reveals itself. Eco’s genius is to entertain, to carry us along with his story of corruption, love and conspiracy, while planting deeper seeds of meaning, disquiet and sly observation. Eco plays with the conceits of detective novels and conspiracy thrillers. Our protagonist was once a ghost writer of detective novels and there are nods to Marlow and Maigret. But this novel contains many things: a ghost story haunted by skeletons of the past; a love story where a lonely man finds salvation; a story of political conspiracy, and a satire on modern media. It is a critique of our contemporary culture, where news, information and layer upon layer of historical interpretation leave us gasping for air and vainly searching for meaning – the antithesis of the detective novel. Through its form, the novel reflects the themes. Eco is constantly challenging us as readers. We think we see or understand one thing but he asks, “How can you? What do you really see? Why are you believing what I tell you? I am playing with you just like everyone else does, when will you realise?”

Set over two months in the 1990s, Número Zero is told through the eyes of Colonna, a self-confessed ‘compulsive loser’, a failed academic-turned-translator-turned-ghostwriter-turned-journalist. We first meet him on the edge, paranoid and exhausted, believing that ‘they’ will come for him, because he knows too much; what he knows and who ‘they’ are, is revealed later in the novel. Colonna is accepting of his place in life, he mocks the slipper-wearing ivory towers of his education and revels in his self-knowledge as a loser:

“losers already know more than winners… the more a person knows the more has gone wrong”.

He is hired by a newspaper editor, Di Samis, to be his ghost writer (‘the negré’) documenting a year in the life of a new newspaper, Domani, with the book also being called Domani – Yesterday. The book is to be the editor’s insurance policy as he believes the newspaper will never see the light of day. He believes its media magnate owner, Commendator Vermicate, is using the paper to gain political access to Italy’s inner circles. As a result, they must not report on today’s news but to create twelve issues reporting on the news that has already happened in the last year, in order to prove how good they will be at reporting tomorrow’s news. Each issue has a number – 0/1, 0/2 and so on – hence the title of the novel and Eco’s overarching theme, that the constant retelling of history denigrates its meaning.

But Colonna’s book isn’t intended to document the truth of what happened,

“a tape recorder would do that”, but,

“the book has to give an idea of another kind of newspaper… I need you to invent, idealise, write an epic”.

And as Colonna replies,

“The book will be the opposite of what actually happened”.

So Colonna, as our reliable narrator, is already being undermined.

Much of the first half of the novel focuses on the setting up the newspaper and a systematic undermining of all the values we might imagine apply to journalism. Leading a group of misfits, Colonna and Di Samis go about making yesterday’s news but all the while remember that their readers have the “average mental age of twelve”, that they aren’t interested in proper politics or culture but in scandal and celebrity. This applies particularly to the place of literature in newspapers:

“Turn the wretched book into something even a housewife will understand, so she has no regrets if she doesn’t read it”.

The shadow of the owner, Commendator Vermicate, looms over the organisation. Nothing too controversial or too critical of either politicians or of the Mafia is permitted. With its 1990s setting and the person of the Commendator this all feels like a very thinly veiled version of Silvio Berlusconi and his times. It would be intriguing to know how such blatant portrayals have been received in Italy. Or is it the fact that after Berlusconi’s fall from grace there is a new freedom to be critical of the recent past?

Although they proclaim they are creating a new kind of journalism, our friends at Domani use all the old tricks of the trade. Stories are manipulated, unwelcome truths are hidden and the reader is encouraged to believe the newspaper’s agenda regardless of whether it is right or wrong. “It’s not the news that make newspapers but the newspaper that makes the news”. Stories are rehashed, recycled and reinvented; language is a tool of deception; truth is the last thing they want to reveal and the essence of any meaning is muddied.

Meanwhile Colonna is befriended by his colleague Braggadacio (he himself admits his name is rather unfortunate as he sits in a bar boasting of his knowledge of cars). Braggadacio leads Colonna down Milan’s version of the garden path, alleyways of the undiscovered city to a church built on the bones of thieves and vagabonds. Ghosts and skeletons haunt this novel, none more so than that of Mussolini, who haunts Italy’s collective psyche and Braggadacio’s tallest tale: when Mussolini was shot at the end of World War Two (he claims), it was in fact his body double and Mussolini escaped, thereby triggering a series of events involving the Vatican, the mafia and the ‘Gladio’, a rightwing militia repeatedly on the brink of overthrowing Italy and returning it to its Fascist past.

All of which reinterprets and undermines the ‘true’ version of history. Colonna dismisses this as fantasy but events turn sinister and lead Colonna back to the beginning of the novel, on the run and seeking salvation from his lover and, amusingly, the BBC. Again, as he has done throughout the novel, Eco turns the mirror on us, the reader, challenging us, revealing the constructs that surround us.

“News drowns in a great sea of information”, we read near the beginning of this novel, and so do we as readers, helpless and powerless, like Colonna, to resist the constant manipulation of meaning. So what salvation does Eco offer us, dear reader? Escape? Love? Perhaps nothing? Except, maybe that if there is no meaning, there is no power?

Questions Umberto Eco can no longer answer; questions that have acquired new weight and meaning now that he has gone.