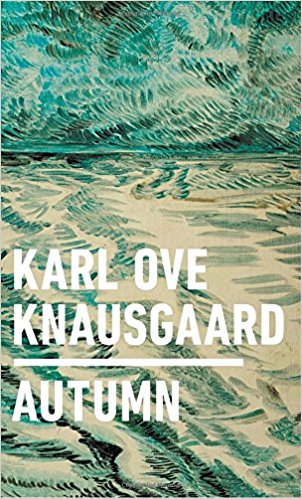 While we await the sixth and final instalment of Karl Ove Knausgaard’s ground-breaking, genre-redefining My Struggle series, his publisher Harvill Secker has launched the English translation of Autumn. Translated by Ingvild Burkey and beautifully illustrated by Vanessa Baird, it is the first in a seasonal cycle, with the other three volumes being published over the next twelve months.

Written in 2013 for his then unborn daughter, Knausgaard captures the world around him through sixty short essays that cover diverse topics from the physical to the emotional, and include blood, plastic bags, lice, war and buttons in order to create a personal encyclopaedia of life.

The Karl Ove we discover here is vastly different to the one we left at the end of Some Rain Must Fall. He strikes us as calmer and happier, appearing reconciled with his place in the world as a writer, father and human being. The charting of internal turmoil has been replaced by an external exploration of existence, his perspective on our human being transferred to a much larger canvas, one on which we are just one small aspect among many, where the familiar becomes foreign and the ugly beautiful: “we are at once familiar with and foreign to ourselves and the world we are part of”.

Stylistically Autumn is very different to his previous sprawling novels, but the themes and obsessions continue. Knausgaard digs down into the mundane and the minute before opening out to the metaphysical and the spiritual. He watches his wife and children go about their daily routine; small tasks bring him pride as he maintains the family home; in wonder he observes the natural world outside his window, as summer turns to autumn, oblivious to his being and his insatiable desire to find meaning in life and authenticity in his writing – a longing in which “one’s notions about reality and reality itself are one and the same thing. Or in other words, a life, an existence, unframed”.

“What makes life worth living?” he asks in his opening letter to his daughter. It’s a question that has defined Knausgaard’s work and fired much of his creative angst. Now, “showing you the world, little one, makes life worth living”, so perhaps this project is where he has finally reconciled the conflict between life and art.

The concept of writing for his daughter allows Knausgaard to approach each essay with a childlike innocence, so that subjects like tin, toilets and teeth can be looked on with new eyes, and the strangeness of what we take for granted can be explored. The book’s form also returns us to his preoccupation with the nature of family, the role of the father (his own father still haunts this collection) and the generational shift in his understanding.

When he says in his introduction that “the world expresses its being, but we are not listening”, Knausgaard is asking us to start listening again. Simple stories are suddenly flipped by an image, an anecdote or an historical cultural reference, which bring loss, nostalgia and joy in unexpected places. Although he is searching outside himself, this collection of essays grounds the reader, slows time and allows us to lift our heads from the page and look afresh upon the world: “Art was the exception. The exception opened up the moment, broke through time and created presence, in the vortex of which everything became meaningful.”