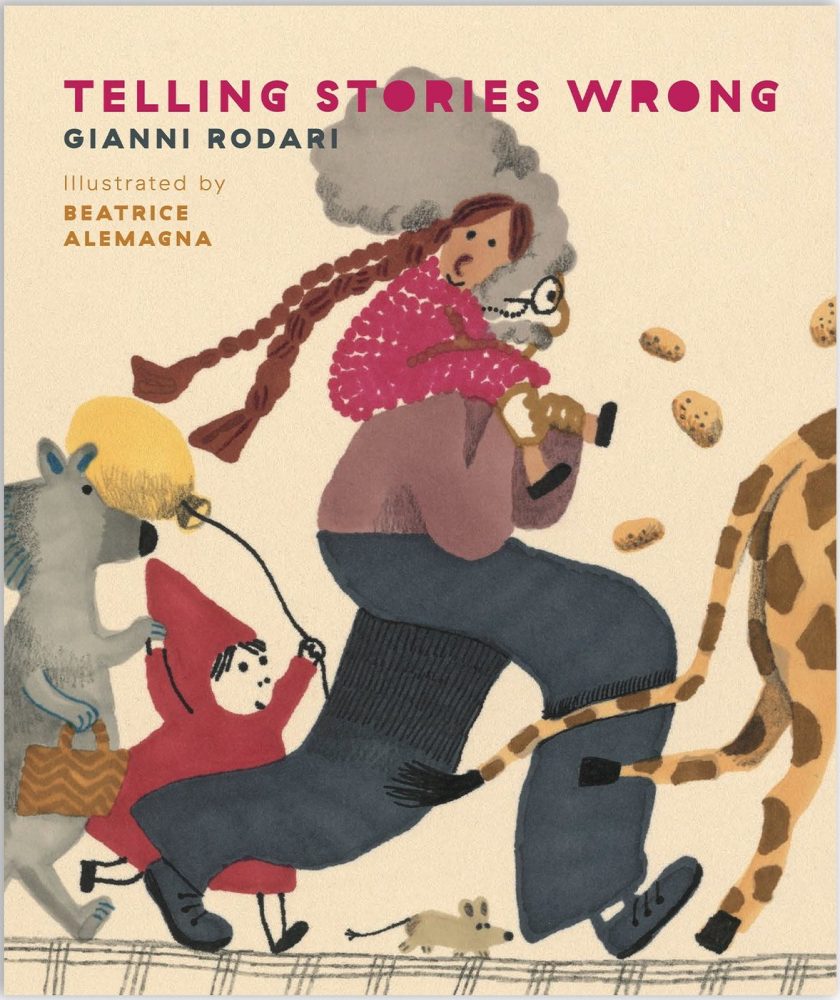 ‘“Once upon a time, there was a girl who was called Little Yellow Riding Hood.”

Her mother said: Now go to Aunt Hildegard’s house and take her this potato peel.”’

Telling Stories Wrong combines the subversive delight of turning familiar children’s stories on their head with the joy of a well carried-out running gag. In this charming, semi-fractured, fairytale picture book for ages four to eight, the grandfather never gets the details right, with the story growing sillier and sillier as it continues. His ever-suffering grand-daughter corrects him with increasing impatience each time he deviates from traditional fairytale orthodoxy, which, of course, is the point. For deviate he definitely does.

When Little Red Riding Hood meets a giraffe rather than a wolf (and later on, a horse), the reader chuckles. So, too, when the grandfather has the wolf ask Little Red Riding Hood to multiply six times eight. When the grandfather randomly changes her colour yet again, the chuckles change into giggles and guffaws in sympathy for both characters – and perhaps the fond remembrance of twisting a story or two ourselves:

Beloved Italian journalist, teacher, and author Gianni Rodari (1920-1980) won the Hans Christian Andersen Award in 1970 for his children’s stories, including Il romanze de Cipollino (‘Tale of Cipollino’ – ‘Little Onion’) and Favole al telefono (‘Telephone Tales’). With its combination of the absurd along with its imaginative creativity, Telling Stories Wrong (a single story extracted from Telephone Tales) is an excellent entry point for his writing. Lovingly executed illustrations by award-winning artist Beatrice Alemagna – who considers Rodari a ‘spiritual father’ – enhance the warmth of the story with great humour and a marvellous sense of play.

Is the grandfather hopelessly absent-minded? Potentially. Having fun playing with his grandchild and switching things around because he gets bored easily? Perhaps. Most likely, though, he is probably repeating a much-loved storytelling ritual that the two share in which each fresh reiteration grows increasingly wild and off base. While the reader never finds out the whole truth for certain, the ending and the illustrations throughout strongly indicate the latter:

‘“And the wolf said: Take the number 75 bus, get off in front of the cathedral, turn right, and there you’ll find three steps and a coin on the ground. Forget about the three steps, pick up the coin, and go buy yourself some bubble gum.”

“Grandpa, you really don’t know how to tell a story. You get everything wrong. But all the same, can I have a quarter to buy some bubble gum?”

And Grandpa went back to reading his newspaper.’

Giving his granddaughter a hug, the grandfather picks up his paper again, satisfied at another story wrongly – but well – told.

Nanette McGuinness is an opera singer and translator of over seventy books and graphic novels for children and adults from French, occasionally Spanish, German and Italian, including the Geronimo Stilton graphic novels. Her translation of Luisa: Now and Then was a 2019 Stonewall Honor Book and a 2020 GLLI Translated YA Book Prize Honor Book.