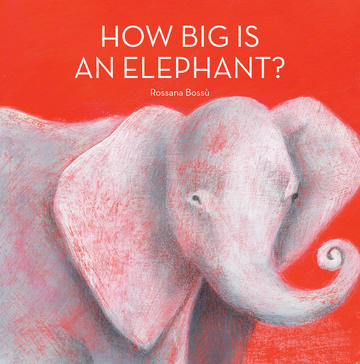 #RivetingReviews: Mia Spangenberg reviews HOW BIG IS AN ELEPHANT? by Rossana Bossù

How do you introduce concepts like ratio and relative size to the youngest children in a fun and engaging way? Rossana Bossù, a graphic designer and illustrator/author of children’s books, has done just that with her picture book How Big Is an Elephant?. Bossù compares animals of different sizes, starting with the biggest, an elephant, and working her way down to the smallest, a flea.

The book opens with ‘1 polar bear is smaller than an elephant’. Presenting one as a figure and elephant as an illustration immediately invites children not yet reading to participate in the story and recall the names of the numbers and animals. On the facing page, an illustration shows how many polar bears are needed to make one elephant, which children can count up. (In case you’re wondering: it’s seven!) The subsequent spreads follow the same format, which builds excitement through familiarity.

And that’s not all. The book leads to a crescendo by asking children to consider what animal is ‘much, much, much bigger’ even than an elephant. On the final spread, children learn that a whale is bigger than all of the other animals, and that it takes all of the animals in the book to make just one.

This is a wonderful book to spark curiosity and introduce maths concepts to the youngest children. It also makes for a fun story to read together at home or during story time. Not least, the whimsical illustrations of animals in costume – a polar bear wears an elephant’s ears and trunks and alligators wear lion’s manes – can lead to discussions about animal features and even lead to an animal costume ball.

HOW BIG IS AN ELEPHANT?

Mia Spangenberg is a translator working from Finnish and German into English. She is a regular contributor to literary magazines and to World Kid Lit. She has a PhD in Scandinavian Studies from the University of Washington, Seattle, where she lives.