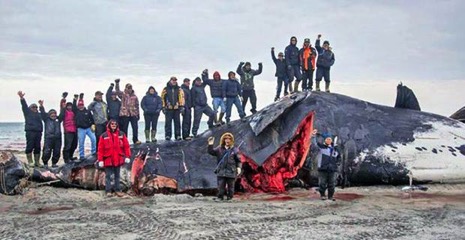 What do I know about the Faroes? A lot more after reading Walpurgis Tide! What did I know? That they’re Danish, that’s to say, part of Denmark; they’re in the North Atlantic, romantic, traditional, closed and remote; the name means ‘sheep islands’. So far, so not so good. They’re actually autonomous and self-governing (within the Kingdom of Denmark); remote and romantic they may be, but they are as ‘modern’ as any other part of Europe (though people can still smoke in bars and cafés); they have their own language, not a Danish ‘dialect’ but a language much closer to Icelandic than any of the mainland descendants of Old Norse; they love Denmark about as much as Brexiters love Europe; and they have the grindadráp, an annual whale-hunt, which they hold to be so much a Faroese tradition as to be part of their national identity.

Now this all may seem to you an unnecessary screed, even over-didactic and pedantic. But it is the core of this fascinating and highly readable thriller, in which the grindadráp takes centre stage. The story goes like this: Some British environmentalists are in the capital city Tórshavn, gathering information about the whale-hunt, in the hope of getting it banned. Then two of them are found with their throats cut amongst the carcases of the whales. And a third threatens to ‘shut down’ the country if the killer isn’t found. The threat is made to Hannes Martinsson, a journalist, who’s recently returned to the Faroes after years abroad. Martinsson is a kind of Philip Marlowe figure – “Her dress was so low-cut that I didn’t dare say what I was actually thinking…” – a world-weary cynic, who reflects on his career as he sits in one of Tórshavn’s many beer clubs:

“Of course, I could have chosen a different life, with a wife… I sipped the gin. I couldn’t have sat like this if was married. Or at least my wife would have to be away on a course or something… But if I had got married when I was young, you could guarantee that I would have been divorced by now, so I’d be sitting in the beer clubs anyway.”

He has very little idea what he’s going to do for a living now he’s back, but one thing he truly doesn’t want to do is be sucked into this international dispute, not least because he thinks the whale-hunts will have to end sooner rather than later, as the whales are so polluted with heavy metals that their meat and blubber are toxic. But then, he’s Faeroese and he can hardly stand by and watch the islands’ money-spinning fishing industry decimated by an international boycott…

He soon discovers that there are some very violent passions in play: he is assaulted because he’s a “Dane-lover”; his decision to take the money and investigate the murders results in his office being broken into and his office window is shot out. The local police regard him as a trouble-maker and he realises he really is on his own against some very nasty forces indeed as he’s hunted through the tunnels of an abandoned coal-mine by a gunman. The dénouement may seem a trifle contrived, but along the way, we get absorbing detail of Faroese life and customs, compelling arguments for and against the grindadráp, flashes of satirical humour…

“Most of all I wanted to blow [the half-naked] bastard to smithereens… ‘Put your underwear on, but slowly.’ With the gun, I pointed to a pair of black boxers… Alan cautiously stretched his right arm across the floor. [He] asked: ‘Was that slow enough or do you want me to take my time?’ ”

…and Martinsson’s discovery that, although he hasn’t a wife, he does have a daughter:

“I had to admit that Leonard Cohen was onto something when he said that you don’t know what it is to be scared until you’re a father.”

This book is an eye-opener, and I loved it.