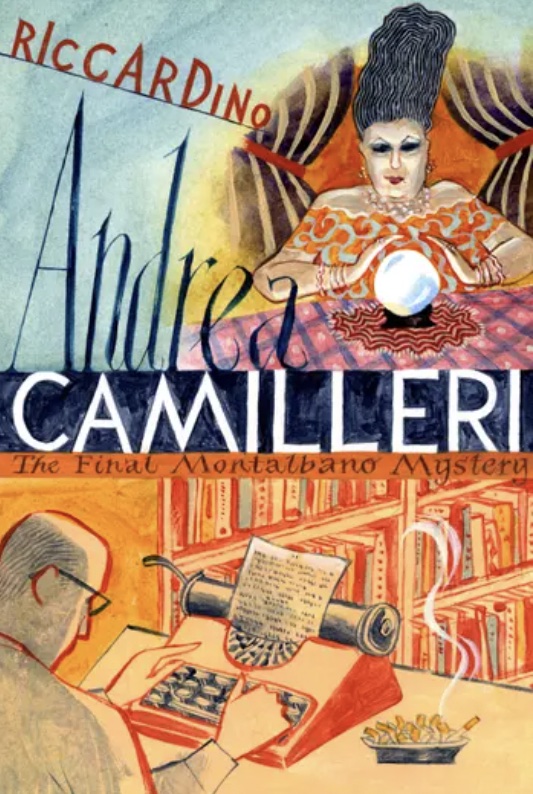 By the time he died in 2019, Sicily’s great crime writer had produced twenty-eight Inspector Salvo Montalbano mysteries, which were adapted into thirty-six dramas by RAI television (I devoured all of them!), turning Luca Zingaretti into one of Italy’s best-known and most sought-after actors. Riccardino, though, is probably the least typical of the series. Camilleri always intended it to be the last of the novels, although he wrote it in 2005, many years and many more Montalbano novels before he actually died. He delivered Riccardino to his publishers with a note instructing them to lock it away until after he was gone. It’s not difficult to understand why: Montalbano’s swansong is not only a disturbing story but also a somewhat unsettling metafiction, with Camilleri, in the guise of ‘the author’ persistently interfering via phone calls and emails with the inspector’s attempts to solve the mystery, criticising his deductions and offering alternative scenarios.

I say ‘unsettling’ because I’m not sure they work to the story’s advantage: although they no doubt reflect Camilleri’s own musings and rewrites, they were for me distracting. The exchanges between Montalbano and his author become increasingly tetchy, as the former reflects ruefully that his TV alter ego will always have the upper hand: ‘He knows what will happen next, while you are always forced to improvise.’ The author, however, asserts, when the inspector asks him who informed him about the Riccardino case, that Montalbano is effectively a puppet: ‘Salvo, it’s me who informs you … this story about Riccardino, I’m writing it as you live it. It’s as simple as that.’

It’s not hard to understand Montalbano’s frustration with this meddling, as I also felt frustrated at the way it held up the narrative. Moreover, from the outset, Montalbano is showing his age and world-weariness:

‘ … the years [were] now weighing on his shoulders … the truth of the matter was that for a while now he’d no longer felt like it … he’d come to the realisation that there was no one more brain-dead than someone for whom the solution to any problem was murder.’

However, once a detective, always a detective, and Montalbano willingly casts off his ‘black dog’, unleashes his investigative instincts and is soon up to all his old tricks: refusing to do it ‘by the book’, ignoring his superiors and their orders, and disappearing when they attempt to bring him to heel, while always finding time to eat substantial lunches in his favourite restaurant.

The story hooks you straightaway. A man calling himself Riccardino phones Montalbano out of the blue at 5.00 a.m., demanding to know why he’s late for their appointment with some friends at a local bar. Piqued at being woken by a wrong number, Montalbano tells him he’s on his way and goes straight back to bed – only to be called again an hour later to be told there’s been a murder in broad daylight outside the very same bar mentioned in the first phone call. The victim is Riccardo Lopresti, alias Riccardino.

What follows is a classic Montalbano investigation, with all the well-known characters. As always, bar the continued meddling of the author inter alia, Montalbano digs deep and uncovers a fetid brew of adultery, graft and stolen diesel behind Riccardino’s murder, which neither the police commissioner nor the local bishop nor the prosecutor – nor indeed the distant but powerful figure of the undersecretary at the Ministry of Justice – want revealed. All of whose wishes and demands Montalbano duly ignores in his determination to deliver the solution to this final case, his swansong. As ever with Camilleri, the last few pages are a revelation, though not the one you might have expected. Montalbano’s frustrations boil over and, ignoring his creator, he takes the final decision into his own hands: the last word is his alone.