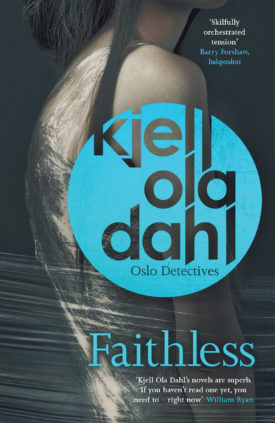 Although Kjell Ola Dahl is one of the grand old men of Nordic Noir (well, that’s a bit of an exaggeration, he’s not quite 60!), he’s not that well-known in the UK. His best-known novels revolve around a pair of Oslo detectives, Gunnarstranda and Frølich. Faithless is the seventh in the series (four translated into English by Don Bartlett), and I have to confess I haven’t yet read any of the others… but if they’re as good as this one, then I shall be putting right that omission in short order. This story is in many ways a good, old-style whodunnit and revolves as much around the character of Frølich himself and his past as around the perpetrator of the crimes.

A young black student disappears and Frølich is assigned to the case and seems to be making some progress. At the same time, what seemed to be the simple arrest of another young woman involved with drugs suddenly takes on a very different hue. Having been invited to the 40th birthday celebrations of an old friend he’s hardly seen since his teens – Karl Anders Fransgård – he discovers he’s engaged to the same young woman. Hard on the heels of this revelation, a woman’s body is found in a rubbish skip, wrapped in plastic sheeting and with scald marks between her thighs. It’s his friend’s fiancée. And his superior, Inspector Gunnarstranda, believes this murder is related to an unsolved murder years previously in northern Norway. Frølich begins to suspect his past is coming back to haunt him – and not for the first time.

It had shocked him to see [her] white, lifeless face. The state of her body, where it had been found…For the first time in many years, he didn’t know how he would be able to cope with his job. This wasn’t only about murder. This was about Karl Anders and himself…

Unlike many other books in the Nordic Noir genre, this is less about blood, gore and action than a police force under stress, its personnel stretched too thin to be able to cope with its case load: a disappearance, one – or two? – murders and a drugs lord, who may or may not be part of both the other cases. Add to this Frølich’s personal involvement with the prime suspect in the murder, and you have the recipe for a chilling, psychological drama. If you haven’t, like myself, read any of the earlier books in the Oslo Detectives series, you will find enough background and context here to make this a more than gripping novel. The denouement is shocking, not so much for the revelation of who the perpetrator is, as for what this means for Frølich himself. We now have to wait for book eight to find out…