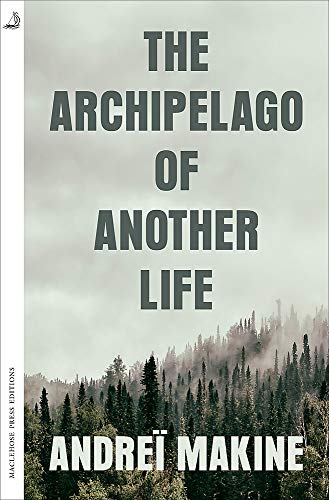 #RivetingReviews: Lucy Popescu reviews THE ARCHIPELAGO OF ANOTHER LIFE by Andreï Makine

Early on in Andreï Makine’s latest novel, we recognise that we are going to be led into the heart of darkness by the use of a dual narrator and a framing device that are reminiscent of Joseph Conrad’s classic. Set in the far eastern borders of the Soviet Union, an orphan boy follows a stranger into the forest. He is quickly discovered and befriended by the man he has pursued. The stranger makes him tea and begins his tale.

In 1952, Pavel Gartsev is sent on military service to a training camp in the eastern Siberian taiga, where the men’s resistance in the case of a nuclear attack is tested. It’s the early period of the Cold War and paranoia is at an all-time high. Gartsev is bullied by his commanders and forced to endure various acts of cruelty. Ordered to capture an escapee from a nearby labour camp, he accompanies a motley crew deep into the taiga. The commander of the group is swiftly overruled by two zealous, trigger-happy representatives of Stalin’s secret police, while another recruit, Sergeant Vassin, hopes, like Gartsev, that the fugitive will elude them.

When the men discover that their prey is a woman it unleashes dangerous impulses in them all.

‘She had humiliated and belittled us. Now we were the real victims. Endlessly shunted this way and that in this interminable taiga. Our honour under attack. Cut down to size by a girl … a bitch who must be punished, not for her crime but for having perverted the logic of this world!’

But the thick forest proves inhospitable to those who don’t respect it. Each of the men suffer an injury and, fearful of dying in the wilderness, return to camp. Gartsev is left alone to catch the woman or perish.

Up to this point, Gartsev has been dominated by his ‘rag doll’ soul, ‘a kind of guardian angel that … would counsel caution, compromise, resignation.’ It allows him to survive in an immoral society but, he gradually realises, he can no longer countenance this shadowy existence. Everyone informs on everyone else, petty tyrannies abound and no one is to be trusted:

‘In this confused world one constant prevailed: hatred. It could derive either from desire or from fear, or else from ideas that appeared to be noble, but, curiously enough, were the most lethal of all.’

As he closes in on the fugitive, Gartsev faces a stark choice that might yet be his salvation.

Makine writes in French, superbly translated by Geoffrey Strachan, but the mood of his books is typically Russian. He often incorporates elements of his own life in his fiction – he was orphaned, spent part of his childhood in Siberia, served as a soldier in Afghanistan and defected to France in 1987. The Archipelago of Another Life is a powerful meditation on the shackles of oppression and the liberty of exile. Gartsev chooses a different path from Conrad’s Kurtz, and finds his moral compass in the remote, inhospitable terrain he inhabits; the darkness remains external and the wilderness offers refuge from the corrupting forces of an inhumane, totalitarian state.

THE ARCHIPELAGO OF ANOTHER LIFE

Translated from the French by Geoffrey Strachan