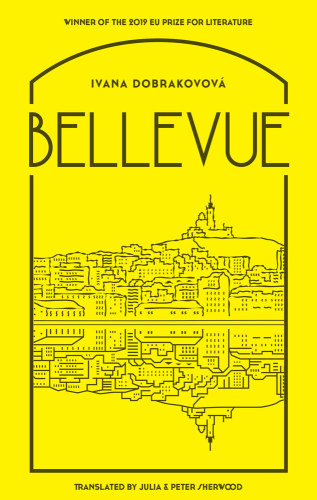 Ivana Dobrakovová has been labelled an ‘expat writer’ because her stories often explore the experience of living abroad. She resides in Turin and is a talented translator of French and Italian literature – she brought Elena Ferrante to Slovakia. In Bellevue, her first work to be translated into English, Dobrakovová continues this ‘expat’ theme by charting a young woman’s breakdown while staying in France.

At first, everything about nineteen-year-old Blanka seems perfectly ordinary. She’s in a stable relationship, is studying at university and wants to improve her French. She decides to spend her summer holidays in Marseille – volunteering at a care home in return for board and lodging. Once there she falls in with a lively group of fellow Europeans. In particular, Martina, a beautiful Czech girl who holds everyone in her thrall, and impresses Blanka:

‘with her easy manner, she seemed the kind of person who could fit in anywhere … in short she was the exact opposite of me.’

Blanka feels awkward around the residents of the care home, but

‘tried to appear natural at all costs, like there’s nothing strange about the fact that both your legs are missing, that your head is twice the size of a normal one, that your arms are like matchsticks, spindly and contorted, that you’re drooling, reek of stale urine and faeces, and your face is frozen in a permanent grimace.”

Meanwhile, her relationship with the other volunteers, Martina, impetuous Luca from Italy and dependable Drago from Slovenia, quickly blossoms. During their time off, they drive into Marseille, shop and sunbathe. On one of these trips, Blanka buys a copy of Albert Camus’ L’Étranger (‘The Outsider’), foreshadowing her estrangement from the group. After Martina pairs off with Luca, Blanka becomes closer to Drago. She moves into his bedroom and everyone presumes they are sleeping together.

When the first tentacles of depression begin to invade her mind, Blanka begins to cut herself and confides in Drago. She is worried that she has no medication to hand. He advises her to work through it without drugs in an attempt to discover the underlying cause of her depression, and promises to support her. However, Blanka becomes delusional. When her new friends try to help, she is suspicious of their motives. She cannot control her emotions and her behaviour is increasingly inappropriate.

Blanka’s inner turmoil is reflected in the breakdown of language, beautifully rendered in Julia and Peter Sherwood’s translation. Blanka’s speech becomes fragmented, repetitive, a stream of consciousness; she refers to herself in the second person (just as she has referred to the residents). Dobrakovová captures the breakdown of mind and body in the following nod to Kafka:

‘Alone again, you’re lying in a hospital room, whiteness, cleanliness, just a beetle on the far wall, its black carapace, its wing-case that grows and grows and grows, getting bigger and bigger, you watch it impassively, a black smudge on the wall, is it you, Gregor?’

It is the confidence with which Dobrakovová conveys a young woman’s unravelling and her alienation from her peers that most impresses in this powerful novel.