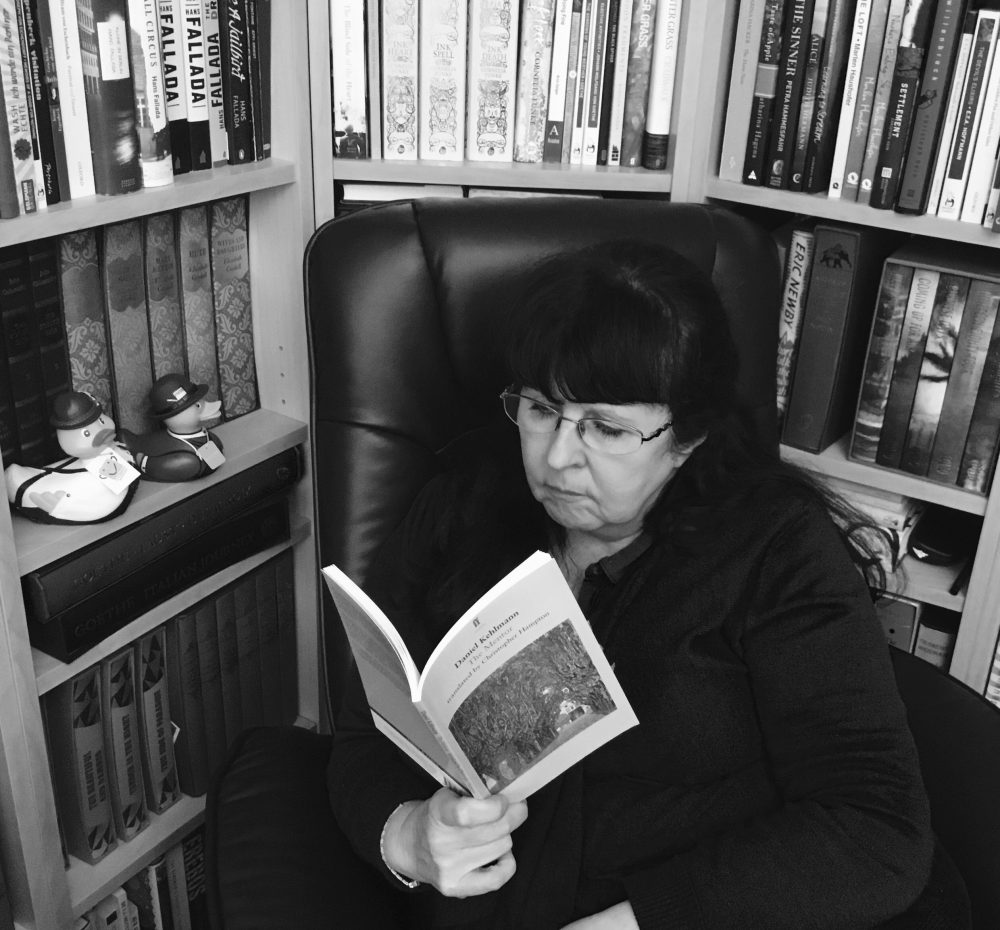 Daniel Kehlmann specialises in parody and subversion and I make a beeline for everything of his that gets translated. 2017 has, therefore, been a good year, with two Kehlmanns brought to the British market.

Firstly, the short novella (or should that be long short story?) You Should Have Left (translated by Ross Benjamin). It’s spooky, yet heart-warming and perfect for fans of David Mitchell’s Slade House. And that’s all I’m going to give away.

[But see this month’s Riveting Review by Patrizia Crivelli! – Ed.]

Secondly, something quite different. Kehlmann’s play, The Mentor runs to only 51 pages. It premiered in Bath earlier this year, and I do wish I could have been there, because it is an absolute riot. Kehlmann is sending up his own profession, and he is merciless.

Mentoring programmes are all the rage, aren’t they? Someone experienced takes a newbie under their wing and gives them the benefit of their hard-won expertise. It makes the mentor feel philanthropic and the mentee grateful. Lifelong friendships are formed and mutual respect is guaranteed.

Well …
As the curtain rises, Martin Wegner is delivering his acceptance speech for the Benjamin Rubin prize.

Forget him? Forget the maestro, my friend, the great Benjamin Rubin? Ladies and gentlemen, today, as I receive this prize named after him, the memories come powerfully crowding in …

The rest of the play is a flashback to the days when Martin Wegner was a young playwright, hailed as ‘the voice of his generation’, seeking to capitalise on the success of his debut. He takes part in an experimental mentoring programme – and his mentor is “the great” Benjamin Rubin. Only it soon becomes apparent that Rubin, already at the end of his career and never having lived up to the promise of his early success, knows more about Scotch whisky than writing plays.

Lowland malts are very safe, and bland, a bit boring. Highland whiskies are bituminous, like liquid tar, like drinking smoke. Speyside malts come from the border between the Highlands and the Lowlands. The Spey flows through the Eastern Highlands, then down past Balmoral, for which good Scots have never forgiven it, but the region produces the most balanced whiskies. Cragganmore may not be the best in the world, but it’s very drinkable.

That speech is almost a leitmotif. So yes, he is an opinionated bore. And a diva. Not in the slightest philanthropic. He’s there for one reason only – the big fat fee. Martin Wegner, the young playwright, doesn’t really believe he’s in need of any help. But he has brought the script of his second play with him. He, too, has been enticed by the big fat fee, paid by the Kurt Freytag Foundation. So, what happens when two egos collide? Or rather when Wegner’s manuscript meets Rubin’s red pen? BOOM!

Caught in the crossfire are Wegner’s wife and Erwin Wangenroth (‘Erwin red cheeks’). She, the wife who has made all the sacrifices for the sake of her husband’s art, tries to keep her husband’s ego in check, while Wangenroth, the foundation’s administrator and would-be artist, has the thankless task of scuttering around the two egomaniacs, trying to keep the mentoring programme on the road. Their efforts are, of course, doomed, but, for both, these events provide moments of clarity that point to happier futures.

This is the funniest thing I’ve read all year. It takes an hour or thereabouts to read and is a perfect pick-me-up. Though possibly because I’m not a writer, I suspect that Kehlmann is exposing the secrets and insecurities of the writing life and the writerly ego more than I could possibly imagine.

Translated from German by Christopher Hampton

Published by Faber and Faber Limited (2017)

This review was originally posted on Lizzy’s Literary Life as part of German Literature Month on 21st November 2017.

Lizzy Siddal is a British bibliophile, resident in Scotland (and, therefore, with a more than passing interest in the malt whisky pontifications of Benjamin Rubin!). She has dreamt of retiring to Germany for the last 25 years, and has “kept in touch” by reviewing lots of translated German-language literature on her blog, Lizzy’s Literary Life. She has also co-hosted German Literature Month for the past seven years. With current events as they are, her retirement plan is now on hold. This means that she’s just going to have to continue reading and reviewing translated German-language literature (though not exclusively) for the foreseeable future…