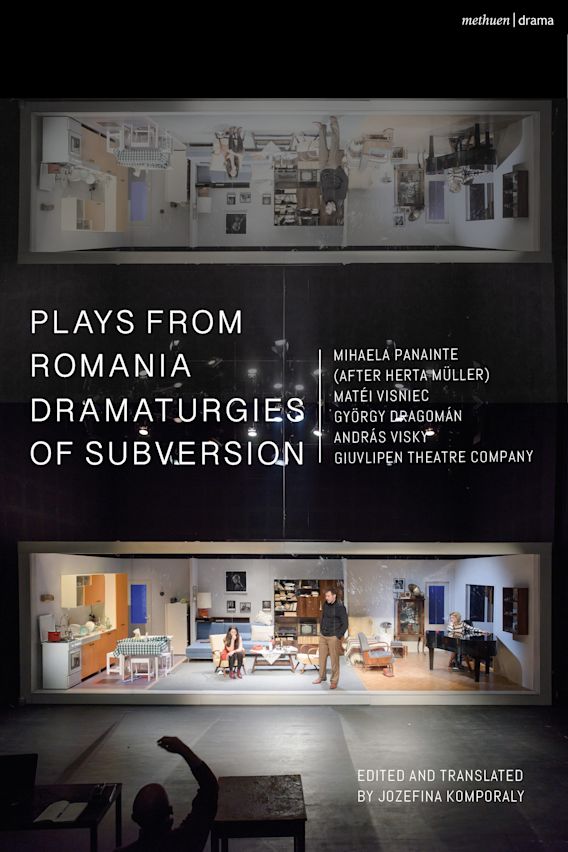 In the foreword to Plays from Romania: Dramaturgies of Subversion, a collection of six translations by Jozefina Komporaly, theatre director Faynia Williams points out that ‘[t]he very title that describes the plays as Dramaturgies of Subversion should arouse the interest of those working in British theatre’. This may be slightly misleading: the purpose of the collection is to represent the wide variety of perspectives and voices in recent Romanian playwriting, particularly those from minoritised cultures (Swabian German, Hungarian and Roma). As Komporaly herself points out, within this, ‘there is space for conformity alongside risk-taking’. If the title encourages more contemporary British theatre makers to pick up the book, though, great: they’ll discover a diverse, potent collection of play texts that reveal some of the more complex and lesser-known facets of Romanian theatre culture and recent history.

The first three plays address life in Romania before 1989 and the fall of Ceauşescu. Mihaela Panainte’s 2018 stage adaptation of Herta Müller’s 1982 short story collection Niederungen (‘Lowlands’) is set in a drab, German-speaking village in the Banat region of Romania. The language is emptied of emotion; it floats over its own oddness: characters speak in non sequiturs, as if alienated from the meaning of their own sentences. The scenes are vignettes, undisturbed by plot development, creating an almost-blank canvas that works, strangely – but excitingly.

Matéi Visniec’s early play The Spectator Sentenced to Death is a grimly comic absurdist farce about a Stalinist show trial in which a random audience member is denounced not only by a judge, a prosecutor and his own defence lawyer, but by various witnesses from the theatre – the usher, the cloakroom attendant, the playwright – until eventually a huge crowd destroys the stage. Visniec’s play feels genuinely vicious and frenzied, as if there is blood at stake. Written in 1984, it provides a dark, valuable insight into a repressive totalitarian regime.

The Passport was written in Hungarian by György Dragomán and staged in 2016 at the Hungarian National Theatre in Cluj. It’s a realist domestic drama in which a young girl from a 1980s middle-class family is offered as a bribe to the chief of the secret police in a small Transylvanian town. It is formally conventional, but this style lends a crystalline clarity to its warning about the dangers of secrecy and hypocrisy, and Komporaly’s agile translation handles it well.

The Man Who Had His Inner Evil Removed, another, later, play by Matéi Visniec, acts as a bridge between the works dealing with life in a Communist country and those concerned with Romania’s participation in wider global economies and concerns. Visniec was granted political asylum in France in 1987 and now works as a radio journalist there. The play is bizarre, featuring stage directions such as: ‘A gigantic rat’s tail (slightly pink with tufts of hair) descends from the ceiling and parades itself onstage.’ It’s a dystopian vision of the future of rampant consumerism, in which humans must form a Faustian alliance with rats to deal with their waste – and is hugely enjoyable too.

András Visky’s Stories of the Body also takes place on an international scale. It consists of four plays, each focusing on a single woman: Artemisia Gentileschi, Mother Teresa, Eva (a Roma sex worker) and Lina (a dancer who loses her legs in a car crash). There is a dreamlike, porous boundary between imagination and reality in each poetic narrative. Komporaly’s translation was commissioned by Theatre Y in Chicago, but Visky’s author’s notes are clear that there isn’t a definitive way to stage Stories of the Body: ‘stage directions to my plays are mere suggestions’. The plays are offered up as living texts.

Sexodrom, created by the Roma feminist theatre company Giuvlipen, also interrogates gendered and ethnic oppression, but it does so with the opposite of dreamlike poetics: it’s in-your-face, brightly coloured, gleefully rude. In the final scene, the company founder, Mihaela Drăgan, clarifies the performance’s context: ‘When #MeToo started, I was hoping that justice would be done … Instead, two years have passed and there was more visibility for the campaign #şieu, a treasure trove of authentic Romanian humour campaigning for motorways.’ Unlike for the other ethnic minorities represented in this collection, there is still no national Roma state theatre. The issues in the play are ongoing and urgent: you can see why it feels necessary to confront them directly.

Almost all the plays in the collection insist on the vital importance of free artistic expression, whether they were written under state censorship or in a post-1990 cultural landscape in which new writing is undervalued. In Sexodrom, Mihaela’s final speech posits culture as a desperate battleground: ‘you have the power to decree that the art of minorities and of women is inferior, while the art of white men is noble and uplifting. Noble art, my arse!’ One of the most visceral images in The Spectator Sentenced to Death, a plunge from farce to terror, is when the Author is dragged in as a witness – gagged, with a hood over his head. In Artemisia, from Stories of the Body, the title character cries repeatedly, like an incantation, ‘Aaaaaaart! Aaaaaaaart!’ Four scenes in The Man Who Had His Inner Evil Removed are called ‘What Is Poetry’. They seem almost unrelated to the rest of the play, except that maybe they are what it’s really all about, somehow:

‘Poetry is when your daughter says, “I’ll take your voice away.” And you reply, “Don’t take my voice.” But she takes it regardless and says, “I took it.” But you can’t say a thing because you have no voice. She then understands your plight and says, “Ask me to give you your voice back.” And then you ask her, inaudibly, to give your voice back.’

These playwrights have loud, interesting voices. Now that their intense, funny, bleak and thoughtful plays are accessible to Anglophone theatre makers, readers and audiences – in a series of sharp, versatile translations that range in tone and register from furiously hard-nosed to softly lyrical – I hope they are heard.

PLAYS FROM ROMANIA: DRAMATURGIES OF SUBVERSION

Edited and translated by Jozefina Komporaly

With the kind permission of Bloomsbury, you can read an exclusive extract from Sexodrom here.

Lily Levinson writes about theatre for the online magazine Exeunt and on her blog malcolmmooney.wordpress.com. She has been a member of the London Library Emerging Writers’ Programme, the Soho Writers’ Lab and the Royal Court Script Panel. In 2019, she received a British Council Theatre and Dance bloggers’ bursary to research and write an article on contemporary Romanian theatre.