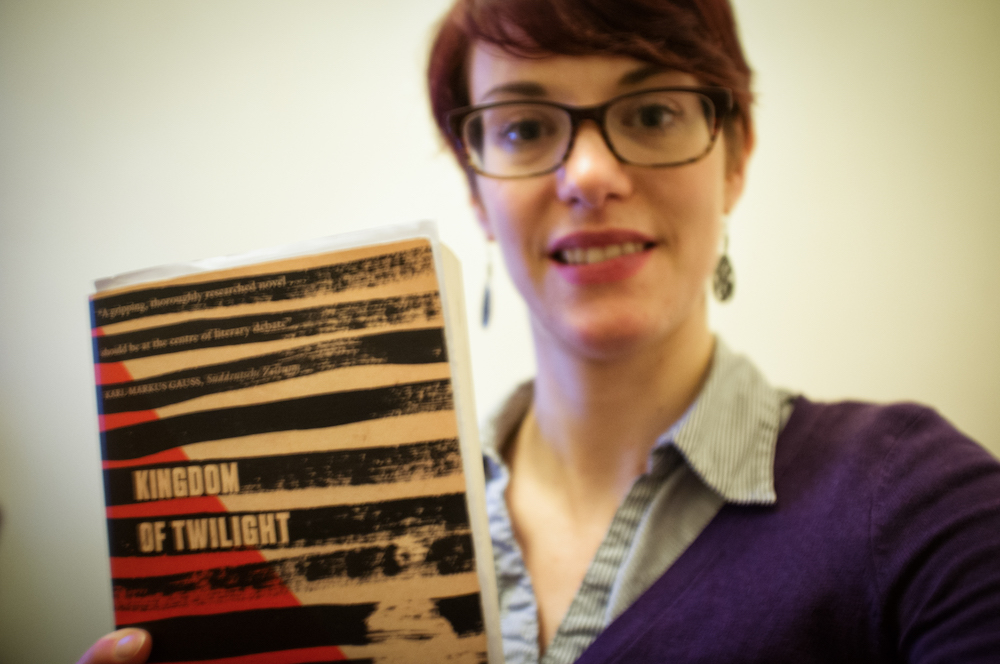 “In truth, there are no superhumans or subhumans,” thinks Anna, one of the central characters in Steven Uhly‘s epic novel, Kingdom of Twilight. Even Sturmbannführer Josef Ranzner, a fanatical Nazi who sexually abuses Anna, his Jewish slave, is to her, “just a fellow human who, for unknown reasons, has become an anti-human.”

This discomfitting truth – that we are all just humans – resonates through this ambitious and compelling novel, published next month in English by MacLehose Press. Kingdom of Twilight is the fourth novel written by Uhly, a half-Bengali half-German author born in 1964 and living in Munich. It’s a sweeping saga that takes the reader from 1944 to the mid 1970s and from Berlin to Poland to Tel Aviv. Uhly separates his novel into 186 episodes, or vignettes, some just a few pages long. Like so many of the characters, we find ourselves in perpetual motion, transported forwards and backwards in time and sideways in space, with few signposts to alert us to each episode’s new setting.

The novel tells the story of three families as they negotiate the indeterminate, often threatening, twilight between war and peace, a space filled with ghosts of the past. For nothing ends in 1945; this is no ‘Stunde Null’ or ‘Zero Hour’. Violence, death, persecution and exile remain part of daily life, both for those who lived through the war and for the next generation.

Anna survives the war and falls in with a group of Jews trying to get to Israel. Pregnant after being raped by Ranzner and several other members of the SS, she meets and soon marries Peretz Sarfati. She gives birth to a boy, Shimon, and later, after they have settled in the newly-recognized state of Israel, has a child with Peretz, a girl called Lana. While in a Displaced Persons camp in Berlin soon after the end of the war, Anna meets Frau Kramer, whose husband and son died in the war and who fled from her home in occupied Poland as the Soviet Army advanced. In 1944, she and her husband gave refuge to a young pregnant Jewish woman, Margarita Ejzenstain, who has just shot and killed an SS officer. She gives birth to a girl, Lisa, in the cellar of the Kramers’ farmhouse but does not survive the winter march from the East and Lisa is brought up by Frau Kramer, whom she believes to be her grandmother. The third strand of the plot follows Josef Ranzner, who takes on a new identity after the war as Otto Kruse. He marries and has two children, Heinrich and Gudrun, but remains plagued by his past and his inexorable obsession with Anna.

The three strands become ever-more interwoven as each of the characters struggles with their own twilight period. How can uncomfortable truths from the past be integrated into present reality? What defines a person – blood, deeds or the actions of one’s parents? – and how can identity be negotiated in a post-war world still blighted by conflict, both personal and political? “How far must I go,” wonders Lisa after discovering the truth about her mother, “to find something true within me?” It’s a question that echoes through Uhly’s novel.

One thing is clear: the end of the war doesn’t trigger a reset button; nothing returns to how it was before. While living in the camp in Berlin, Anna meets Ruth Abramowicz. In one vignette we see them out walking together – it’s spring 1946 and the world and its inhabitants are healing from the wounds of conflict. “Ruth no longer looked like someone who had recently been liberated from a concentration camp,” thinks Anna. “Her eyes and mouth no longer seemed so big, her face was no longer so small and shrunken, her hair had grown.” Yet the return of her pre-war figure belies more fundamental changes.

“Both of them knew that nobody was granted such a return journey,” the narrator remarks.

Uhly presents us with detailed portraits of all of his characters. William Kramer is no anonymous Wehrmacht soldier, a robotic servant of the Nazi cause, but, in his words, “just a farmer with a rifle.” He’s a shrewd farmer, a loving husband, a proud father and a reluctant rescuer, all too aware of the risks of sheltering a Jewish woman wanted for murder. Even Ranzner, whose sexual perversions and fascist ideology scream ‘cliché’, is a nuanced and conflicted figure with the capacity to arouse our empathy.

The theme of conflicted, overlapping, shifting identities provides for one of the novel’s most powerful moments. The word ‘refugee’ is little used in the novel but this is, of course, what Anna, Ruth, Frau Kramer, Lisa, Peretz and many others are at various points in the narrative. Recalling her flight from the East, Frau Kramer paints a vivid picture of the “white landscape” dotted with suitcases and “prams with frozen babies”. “Some were as small as you,” she told Lisa and spoke of the station “where thousands were standing in the cold, having survived this far, and now waited for a train, for a whole day.”

It is impossible to read these words in 2016 without conjuring up much more recent images of refugees making their way through Europe, dragging suitcases, pushing prams and waiting for days on end at railway stations in the hope of making some sort of progress towards an unknown destination. Refusing to label Anna, Ruth and the others as ‘refugees’ (‘Flüchtlinge’ in German), Uhly shows us the obvious: that the many millions of displaced people traversing Europe in 1945 were ‘fellow humans’, neither ‘superhumans nor subhumans’, and so too, he implies, are the people seeking refuge in Europe today.

Uhly’s novel is not only remarkably poignant, but phenomenally gutsy and full of literary merit. The German market is saturated with novels dealing with the nation’s past, but Uhly has discovered a rich new vein of material, addressing themes and events that have remained largely neglected elsewhere. Yet his book has itself received relatively little attention in Germany. Karl-Markus Gauss, who wrote the only in-depth review, describes it as “a gripping, thoroughly researched novel” that “should be at the centre of literary debate”. And he’s right.

At nearly 600 pages, it’s a long book and sometimes feels a little slow. But that’s a minor niggle in an otherwise phenomenal piece of literature. Before reading the novel, I spoke to Jamie Bulloch about the experience of translating it. “The sheer depth and richness is remarkable,’ he said. ‘I’ve read it cover to cover seven or eight times now and I’m still not bored.”

After just one reading, I understand exactly what he means.

Translated from German by Jamie Bulloch