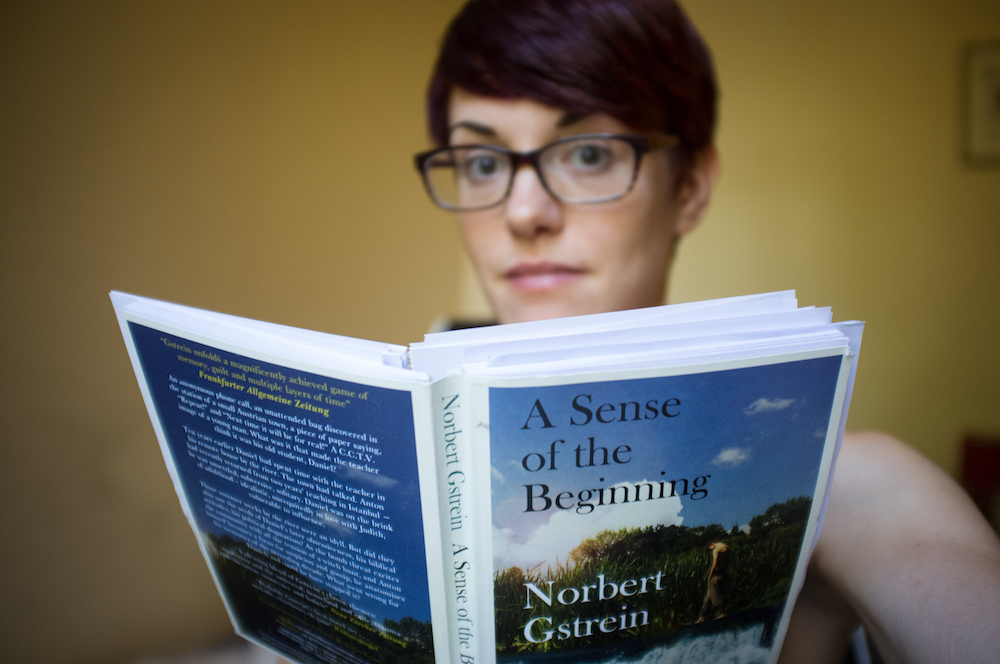 #RivetingReviews: Judith Vonberg reviews A SENSE OF THE BEGINNING by Norbert Gstrein

A Sense of the Beginning, the twelfth novel by Austrian writer Norbert Gstrein, is published this month by MacLehose Press in a translation by Julian Evans. It is an intriguing novel about the blurred line between telling and creating stories. The blurb on the back of the book describes the premise: “An anonymous phone call, an unattended bag discovered in the station of a small Austrian town, a piece of paper saying ‘Repent!’ and ‘Next time it will be for real!’ A CCTV image of a young man. What was it that made the teacher think it was his old student, Daniel?”

The novel itself contains little of the excitement or urgency of this description, however. Ostensibly telling the story of how an ordinary boy could be radicalised and, years later, threaten his home town with violence, the narrative is instead dominated by the self-absorbed narrator, Anton, Daniel’s teacher.

The novel’s title alludes to Gstrein’s main theme: the constructed nature of narratives. As soon as the bomb threat is discovered and a blurry image of the suspect published in the local paper, the town’s inhabitants begin to create stories to try to explain how such a thing could happen in their quiet corner of Austria. As Anton puts it, “People started looking for the beginning of the story that ended with the picture in the newspaper”.

He does the same and later decides to narrate his own quest for that beginning in a story that, we eventually realise, is the one we are reading. He flits backwards and forwards between the present and a specific moment in the past – a summer a decade before that he spent at an old mill he had bought “in a flight of sentimentality”. His teenage student David and his friend Christoph had spent much of the summer there with him, naturally provoking gossip (another form of storytelling) among his neighbours.

Yet, unlike many of his neighbours, Anton recognises the constructed, imperfect nature of stories, especially recollected or retrospectively created narratives. He reflects on how children are taught to write essays in certain ways, “with a fancy structure divided into introduction, body and conclusion”, and applies this awareness to his own task. Daniel’s life was “a gift, a template for anyone who wanted to assemble a life out of two or three bits of data”, he writes. “It is frightening how logically you can chart the path that took him there”. But, he goes on, it would have been “just as logical” if he had become a professor “or at least a teacher like me”.

In subtle linguistic gestures such as this – as well as in more blundering ways – Anton consistently deflects attention away from Daniel, writing himself as the protagonist of a story that should be about his former student. It’s not long before his self-interested ruminations, constant rehashings of past and present events, and repetitive thoughts begin to grate on the reader. At one point, his friend Barbara becomes frustrated. “You see him as your creation”, she says, and she’s correct. He gives himself the leading role in the tale of Daniel’s radicalisation, while Daniel himself, present in the narrative only through Anton’s memories, remains a shadowy, insubstantial figure. Indeed, all of the characters remain wooden and undeveloped, presented to us through the linguistic filter of a self-absorbed, hermitic man.

Not to give too much away, but the “ending” for which Anton is seeking a “beginning” is not what we assume it to be. The at times wearisome narrative Gstrein has forged to lead us there thus loses any value it might have had, beyond hammering home the point that we all seek to construct narratives to explain the world around us.

”I don’t make the mistake of taking everything he wrote literally”, says Anton, reflecting on a manuscript (yet another narrative) that Daniel wrote about that summer. As readers of Gstrein’s novel, we soon learn that taking Anton’s words at face value would be similarly erroneous. Yet, as the tale peters out, we are left wondering what exactly we can take away at all.

A Sense of the Beginning

Translated from the German by Julian Evans